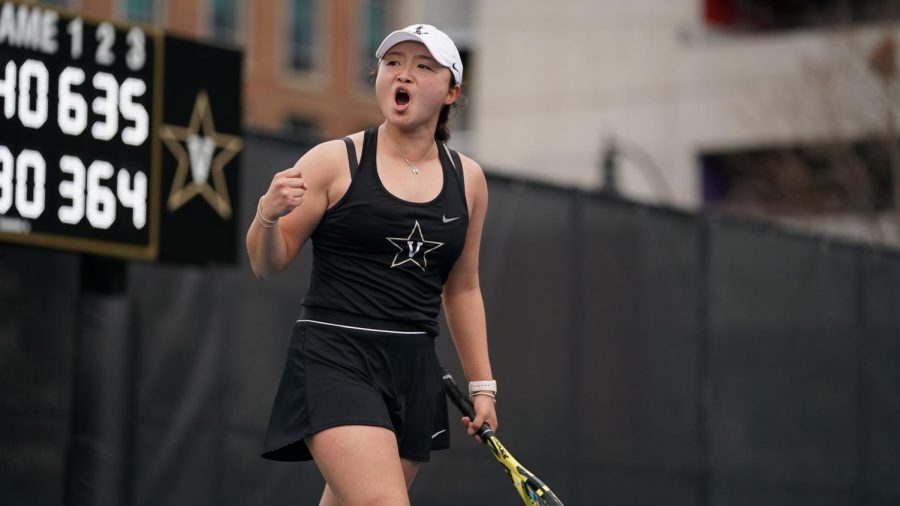 On Friday, the No. 19 Tennessee Volunteers narrowly defeated Vanderbilt 4-3. Vanderbilt was given their second-consecutive loss, but the way the team rallied provided a building block for the Commodores’ future.

The 6-1 victory on Court One put Vanderbilt in the driver’s seat, setting up the Commodores nicely in the doubles column. It was freshman Holly Staff and sophomore Anna Ross that silenced Tennessee. As the Commodores and Volunteers exchanged points, the 5-3 lead would not be surrendered as Ross brilliantly ended the Volunteers’ hopes of gaining the doubles point. The emphatic volleys on the second court by fifth-year Emma Kurtz complemented the strong serves made by talented sophomore Marcella Cruz, leading to a quick boost of energy for the Commodores

While Vanderbilt breezed by Tennessee in doubles, the singles matches proved to be a different story.

On Court One, Chrisina Rosca gave Vanderbilt a 2-0 lead as she defeated freshman Volunteer Eleonora Molinaro in straight sets, with two 6-2 victories.

A 2-0 Vanderbilt lead did not phase Tennessee junior Rebeka Mertena, whose emphatic returns proved too powerful, as Kurtz was taken down 6-1 and 6-3.

Tennessee’s Johanna Silva pulled away after winning the first set 7-5 in a tiebreaker with Vanderbilt’s Amanda Meyer. Silva’s narrow victory in the first set led to newfound momentum, and allowed her to finish Meyer with a dominating 6-0 performance in the second set, taking Court Six.

Court Four consisted of two gritty victories from Vanderbilt Freshman Anessa Lee. Lee won the first set 6-4, but it was the second one that changed the day. Down 5-3, it seemed to be a forgone conclusion that Lee was headed to a third set against senior Tenika McGifin. However, this ended up not being the case, as Lee dialed in through key returns and passionate serves, bringing the set back to 5-5. From here, Lee never looked back, and convincingly won the next two games. Lee’s come-from-behind second set victory looked to be the turning point.

Suddenly, the fate of the day was all in the hands of Court Five, which came down to the third set after Vanderbilt’s Marcella Cruz and Tennessee’s Daria Kuckzer exchanged two 6-3 sets. As Anessa Lee conquered Court Four, Cruz led Kuckzer 4-2. The narrative of the day continued, as both teams kept exchanging punches. The set was tied at four as Kuckzer took the last two games. A set that looked promising for Cruz was suddenly in jeopardy, though, as she trailed 30-0 in the ninth game. It seemed like Cruz had just gotten into a  groove, but Daria Kuckzer took control. Cruz, now down 5-4, faced another 30-0 deficit. With her back against the wall, she stayed alive, but not for long—as Cruz served with a 40-40 tie in deuce, Kuckzer capitalized and handed the Commodores a gut-wrenching defeat by winning the third set 6-4.

Although the Commodores fell short, Coach Aleke Tsoubanos understands that they’re were some positives to take from the day:

“We lost four singles points and in the SEC all of the teams are good,” she said. “A 4-3 loss is tough to swallow, but this is the SEC. We need to regroup and get ready to play a great team [Georgia] within the next 48 hours.”

Tsoubanos emphasized having a short-term memory, as the Commodores look to bounce back quickly.

The potent attack of Vanderbilt will be essential for the Commodores on Sunday, March 28, as they gear up to host No. 3 Georgia Bulldogs in an attempt to put the Commodores back in the win column.