Jerry Stackhouse enters his second offseason as Vanderbilt’s head coach with a chance to set the program up for NCAA Tournament relevancy next season. 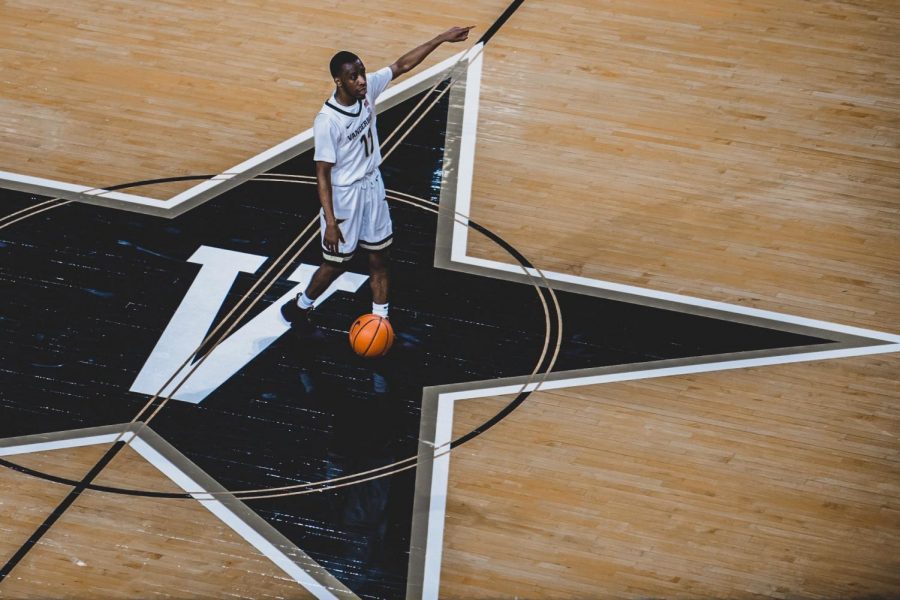 After winning its first Southeastern Conference (SEC) tournament game since 2017, Vanderbilt dropped its final game of the 2020-21 season to Florida 69-63 in the tournament’s second round.

The Commodores wrapped up their COVID-ridden campaign with a 9-16 (3-13) record that featured eight SEC losses by seven or fewer points.

“We’re disappointed. Our goal was to come in here, really do something special. I thought our guys fought all the way,” Stackhouse said after the loss to Florida. “I got no problem with the effort, no problem with how our guys competed. These guys really dealt with a lot this year with COVID, protocols.”

Now, Stackhouse turns to his first completely full offseason at the helm of the Vanderbilt basketball program. His short first offseason was consumed by maintaining recruits and the COVID-19 outbreak last summer stripped him—and programs across the country—of getting in a normal summer of development. But this offseason should be different.

“Can’t wait to get a little bit of time off, let their legs breathe a little bit, probably ten, 11 days, then we’ll get right back in the gym and start trying to get better to try to take it a step further next season,” Stackhouse said.

Entering his third season at Vanderbilt, Stackhouse has one goal in mind: NCAA Tournament relevancy. That size of a leap is attainable but it will be contingent on a rigorous offseason agenda hinging on retaining talent, developing an incoming freshmen class and adding impact transfers.
Retaining talent
After losing 40% of his team’s offensive production last offseason, Stackhouse begins yet another offseason losing impact players. Seniors Clevon Brown and Max Evans have already entered the transfer portal, per multiple reports, and both Disu and Pippen Jr. could hypothetically test NBA Draft waters.

Evans and Brown stood the test of time at Vanderbilt, playing in a total of 241 games in the black and gold. Both epitomized the phrase “glue guys”, bringing grit and a defensive focus to Vanderbilt’s rosters for years. Although Stackhouse appeared very interested in bringing both back for final seasons, they will use their extra COVID-19 year elsewhere.

In addition to Evans and Brown, DJ Harvey has entered the transfer portal, according to Matt Zenitz of AL.com, and Stackhouse previously indicated that Ejike Obinna would also be moving on from the program.

Combined, these four played over 1,500 minutes for Vanderbilt this season and Obinna and Brown represented much of Vanderbilt’s interior presence. Harvey, who never appeared to live up to Stackhouse’s lofty expectations, was playing his best basketball down the stretch and Evans’ streakiness and defensive versatility will be tough to replace.

But the entire offseason truly hinges on the return of Scotty Pippen Jr. and Dylan Disu.

Following a knee injury that held him out of the final seven games of the 2021 season, Disu will likely be rehabbing for most of the summer, which makes a jump to the NBA rather unlikely despite his 14-point, nine-rebound per game averages this season.

“Yeah, I think there’s a chance with Dylan,” Stackhouse said when asked about Disu’s potential jump to the NBA. “His recovery for that [knee] is going to take him probably well into the summer, so I don’t think it would be the smartest thing for him to declare for the draft. I fully anticipate him coming back.”

Disu’s return would cement him as a unanimous preseason All-SEC selection and give Vanderbilt perhaps its best two-way player back for a third season on West End. Disu’s return is important, but if he returns alongside Scotty Pippen Jr., Stackhouse’s NCAA Tournament chances skyrocket.

Pippen Jr. capped a stellar sophomore season with All-SEC First Team honors thanks to his 21 points and five assists per game. He catalyzed Vanderbilt’s SEC Tournament win over Texas A&M with a record-setting 25-25 from the free throw line and finished the season with a usage percentage of 35%, the third highest in the country.

“Obviously I hope that he comes back. I feel like he still has tremendous growth,” Stackhouse said of Pippen Jr.’s draft status. “I think Scotty enjoys college, enjoys being here. Again, those are conversations we’ll have a little bit later down the road. Right now I just want him to catch his breath, catch his body up.”

Pippen Jr. has yet to appear on any high profile mock drafts but his standout sophomore year is sure to catch the eye of NBA scouts. The Commodores took steps this season, but retaining Disu and Pippen Jr. is paramount to the next phase of the Stackhouse era. If the two return, Vanderbilt will enter the 2021-22 season with two of the SEC’s ten best players.
Incoming Class
After bringing in five freshmen last offseason, Stackhouse has locked up two signees for his third official recruiting class. Both fit the mold of his NBA-style offense and figure to be in the mix for playing time as early as next season.

Peyton Daniels will arrive on West End this summer from Atlanta after Stackhouse beat out fellow SEC foes Ole Miss and Georgia for the talented six-foot combo guard.

Daniels, a top-150 prospect according to 247Sports, thrives playing off the dribble and has a beautiful shooting stroke that enables him to pull-up smoothly from nearly anywhere. He averaged 23 points his junior season at Tri-Cities High School and just recently eclipsed the 2000 point mark for his four-year high school career.

Vanderbilt’s second signee is 6’6” wing Gabe Dorsey from the Hill School (PA). Dorsey, a three-star recruit according to 247Sports, garnered interest from a plethora of big time programs including Tennessee, Miami and Penn State and will add length to Vanderbilt’s wing rotation.

With a beautiful left-handed stroke, he emerged as one of the best three-and-d prospects in the northeast this past season. He offers a good blend of finishing ability and length, making him a perfect fit for Stackhouse’s up-tempo, defensive minded approach.

Both Daniels and Dorsey are proven scorers at the high school level and—with offseason development on their bodies—could be valuable to Stackhouse very early on next season.

In addition, with Obinna and Harvey in the transfer portal, Stackhouse will likely have two more scholarships to fill this offseason. With late signing day set for April 14, one final name to keep an eye on will be talented Wisconsin sharpshooter Brandin Podziemski.

The Commodores offered Podziemski on Feb. 24 and, just a day later, he added Vanderbilt to his list of finalists that includes Illinois, Kentucky, Wake Forest and Miami. The 6’5” wing was recently named Wisconsin’s Mr. Basketball and scored over 2000 points in high school.
A crowded transfer portal
This late in the recruiting cycle, it’s likely that Vanderbilt will turn to the bountiful transfer portal for at least one of its final two scholarships. Over 800 players are already in the portal and Stackhouse has talked at length about adding young transfers who can “grow old” with the sound core of players he already has in house.

Considering the departures of Brown and Obinna, size will need to be the priority. Currently, the Commodores boast a frontcourt of Quentin Millora-Brown, Disu and Akeem Odusipe.

Millora-Brown began the season as a starter, but after an extended absence due to COVID-19 complications, he finished the year playing just 14 minutes per game. Odusipe played just 11 games this season and although Disu played quite a bit of center this season, Stackhouse has said time and again he prefers not to have Disu bang down low against larger opponents.

Vanderbilt has not been strongly tied to any big men in the portal just yet. But a few names to keep an eye on from the extensive supply will be Walker Kessler, who took an official visit to Vanderbilt before committing to North Carolina, and CJ Felder, a 6’7” forward from Boston College who, according to Jake Weingarten, Vanderbilt has reached out to.

Stackhouse has, however, been heavily pursuing a number of transfer guards including Texas Tech transfer Nimari Burnett and Lafayette graduate transfer EJ Stephens. Burnett is a talented combo guard and former five-star recruit who played just 12 games for Texas Tech. He is expected to decide between LSU, Auburn, USC, Illinois, Alabama, Oregon and Vanderbilt in the next two weeks. And Stephens is an experienced guard who averaged 17 points per game this past season en route to an All-Patriot League selection.

The Commodores have also emerged as a finalist for the Colonial Athletic Association’s Defensive Player of the Year Tyson Walker. The Northeastern guard averaged 19 points, five assists and 2.5 steals this past season and will likely choose between Maryland, Michigan St, Texas, Kansas, Vanderbilt and Miami this weekend according to Stadium’s Jeff Goodman.

Vanderbilt has been loosely tied to Division-II transfer forward Parker Fox who is cousins with Andy Fox, Stackhouse’s director of scouting, and figure to at least inquire about Northwestern forward—and brother of former Vanderbilt tight end Braden Kopp—Miller Kopp.

Stackhouse will be active in the transfer portal with two scholarships to use and these are just a few names that he could possibly pursue over the next couple of weeks.

There is plenty of work to be done for Vanderbilt to return to NCAA Tournament relevancy next season, but if Pippen Jr. and Disu come back to school, the foundation of a tournament team will be in place. If Stackhouse is able to retain his two stars, utilize his incoming recruits and score an impact transfer, Vanderbilt may not be as far as it seems from going dancing.

“We’re building here. We don’t have time to relax on anything. It was a nice accomplishment to come to the tournament, win a game, to compete our butts off and have an opportunity to win another game. But those weren’t our goals,” Stackhouse said after his team’s SEC Tournament exit. “We want to become a tournament team.”