Vanderbilt notched a win over Louisiana Tech this past weekend to win the Southland Conference Championship. 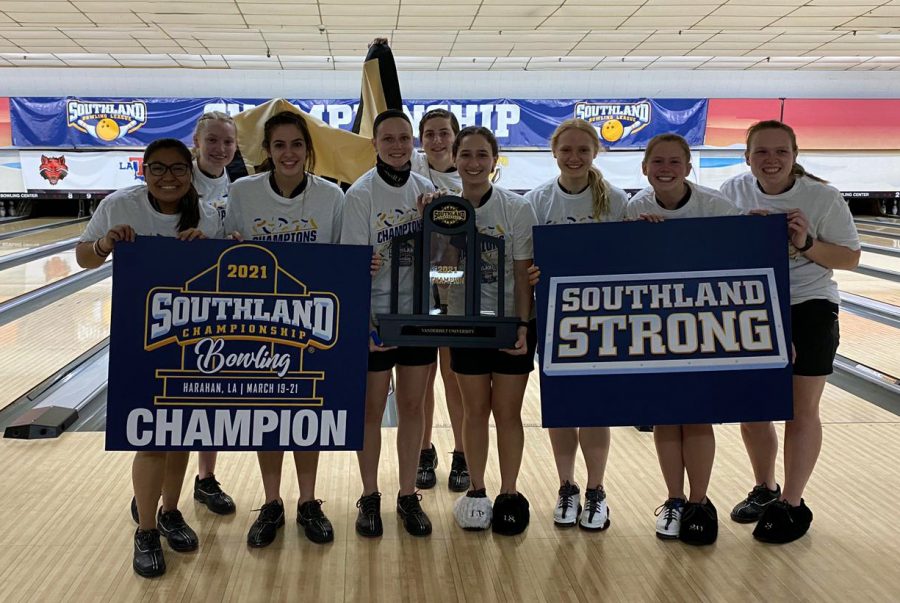 The Vanderbilt women’s bowling team won their third Southland Conference championship (2015 and 2017) in the past six years this past weekend with a 4-2 win over Louisiana Tech in the best-of-seven match. The Commodores split the first two games of the match with the Bulldogs before taking a commanding 3-1 series lead and finishing the job in the sixth game.

Vanderbilt utilized a rotation of Junior Angelica Anthony, Junior Angelique Dalesandro, Freshman Amanda Naujokas, Freshman Jennifer Loredo and Sophomore Mabel Cummins for the first five games of the match, but elected to turn to freshman Caroline Thesier for the sixth and final game.

The Commodores entered the tournament, held in Harahan, Louisiana at the Colonial Bowling Lanes, as the No. 3 overall seed. The tournament took place over the course of March 19 to the 21st. They faced the No.  6 seed Tulane in the opening match and defeated the Green Wave in two games, by a pin count of 949-840 and 976-813. Next up, the Commodores took care of No. 2 Louisiana Tech in two games (1,004-954 and 1,103-1,072) to send the Bulldogs to the double elimination portion of the bracket. Finally, Vanderbilt defeated the No. 5 seed Sam Houston State 4-2 in a best-of-seven in the semifinals.

Head bowling coach John Williamson commended the perseverance and determination of his team to stay focused despite the many distractions the team dealt with due to COVID-19.

“I think the thing that made this a special season was dealing with some of the adversities in the general things we have to do now,” Williamson said. “That challenge is sort of the thing to me that’s made this year special and I think that learning how to manage it [COVID-19], how to deal with it, how to not have to create excuses, and things like that for performances has been special.”

With a roster featuring just three upperclassmen, Coach Williamson was also impressed by the buy-in from his group this year. The team won the Kat Klash in November and the Bulldog Classic in February. In a year with many changes (such as no fans in attendance) due to COVID, creating team culture was more challenging, and necessary, than ever. Despite some tournament wins, Willamson’s squad dealt with adversity with some losses (Big Red Invitational, Lady Techsters Invite) and postponements (Mid-Winter Invitational) along the way.

“We have a very young team, so we had to figure out,‘How do you sort of establish and blend your team culture?’ A lot of times, that culture is passed down from upperclassmen to lower classmen, but a lot of our stuff is done in a way that isn’t conducive to that this year. And so we had to be creative, trying to figure out ways to get an identity that’s consistent with past teams and things like that.”

Coach Williamson attributed that culture creation to the individuals on his squad striving to perform their best in a season like no other.

“Our girls have been great. They’ve really bought into a lot of the things that they’re required to do, and because they want to compete at a high level.”

Sophomore Mabel Cummins won the tournament’s Most Valuable Player award this past weekend. Cummins bowled a 248 in the final match, the highest score on either team. The neuroscience major from Hermitage, Tennessee earned NTCA honorable mention All-American as a freshman, but this was the first postseason action of her career after the season was shut down last season due to the pandemic. Coach Williamson described Cummins as the team’s anchor during the 2021 campaign.

“Mabel, she’s exceptionally young and her freshman year got cut out at the end [due to COVID]. She’s so steady day in, day out, week in, week out. She’s been our rock.”

The conference championship win ensures that the Commodores will compete in the NCAA Tournament, which will be held in Kansas City on April 7th. This is the team’s 13th appearance in the NCAAs in team history, and first since 2018. They won the national championship in 2007 and 2018. Coach Williamson is focused on enjoying the unique experience with his young squad.

“I think with the NCAA tournament it’s easy to get caught up in all of it. We will try to focus on ourselves and focus on controlling the things that we can control. We want the girls to realize that it’s an accomplishment to get there. We’re just gonna we’re just gonna try to enjoy it.”