All in the details: Sprinter Madison Fuller’s journey to Vanderbilt history

Fuller holds the school record in the 60-meter race at a blazing 7.50 seconds. 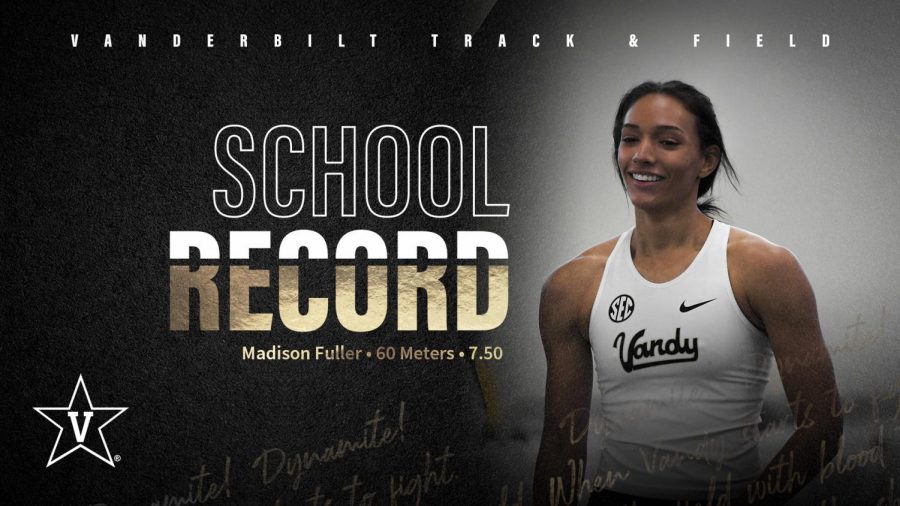 Sophomore sprinter Madison Fuller has been at her best this year. In the indoor season, she competed in all four meets and excelled.

Fuller set a Vanderbilt record in the 60 meters at the Music City Challenge in February. Her time of 7.50 seconds edged the time teammate Haley Bishop set weeks earlier by 0.01 seconds.

In a sport where a fraction of a second matters, every detail counts. That’s what Fuller appreciates most about sprinting.

“It’s very easy to break down the aspects of sprinting, which I love,” Fuller says. “I love asking questions, and my coaches know that.”

After the outdoor season was cancelled last year due to COVID-19, Fuller trained hard to be ready for her sophomore season.

“I wanted to work on a lot of the little technicalities that make up sprinting, especially with such a short race as the 100 meters where every step counts,” Fuller says. “I’ve been working on my reaction time and working on the little aspects like the knee drive to push as hard as I can.”

Fuller was the only sprinter on the team last year, but she was joined by Bishop this season.

“I’m really grateful for the relationship that Madison and I have,” Bishop says of Fuller. “She just honestly pushes me to be even better than before, and I feel like I push her, too.”

Fuller agreed that the relationship makes each runner better.

“I missed having a training partner,” Fuller says. “Haley and I push each other, and we also have that fun camaraderie. I think I speak for both of us that we want the best for each other and no matter the end of every race, we’re happy for each other’s achievements. I’ve loved every minute of getting to train with her so far.”

Fuller is preparing for her first outdoor season since her senior year of high school, and she’s adding another event to her repertoire. She ran the 4×400-meter relay in the indoor season and holds the seventh-fastest time in the event in Vanderbilt history as a member of the relay, but she’s adding the 400-meter race as a solo event for the outdoor season.

“It’s a little bit more strategy than the 100 and 200 meters when you obviously just go out and run your hardest,” Fuller says. “In my opinion, at 400 meters and above, having that speed and endurance to push you through that last 200 meters of the race is necessary.”

Her workouts have become longer and focused on building strength to prepare for the 400 meters. The technical aspects of getting off the block quickly matter less in a longer race, and Fuller is balancing the precise skills of the shorter sprints with the strategy of the 400 meters race.

Striking a balance is nothing new to Fuller, who grew up balancing her schedule between multiple sports and horseback riding. She played soccer and basketball before picking up track in eighth grade. Fuller played on a club travel team for basketball but transitioned to track full-time in the summer before high school. Horseback riding has stuck through with her switch to track.

“I know it’s cheesy that I’m a horse girl, but my teammates make fun of me,” Fuller jokes.

Her mother has always been a horse lover, and she introduced Fuller to horseback riding. Fuller jumped in shows when she was younger and enjoys riding in the summers now. She is also currently training a baby horse.

But riding will have to wait until after Vanderbilt’s outdoor track season, which runs throughout the spring and culminates with the NCAA championships in June.