THORNTON: Write-ins without warrant and misogynoir without merit

The principle of running for the sole sake of addition, as opposed to good addition, needs to be evaluated. 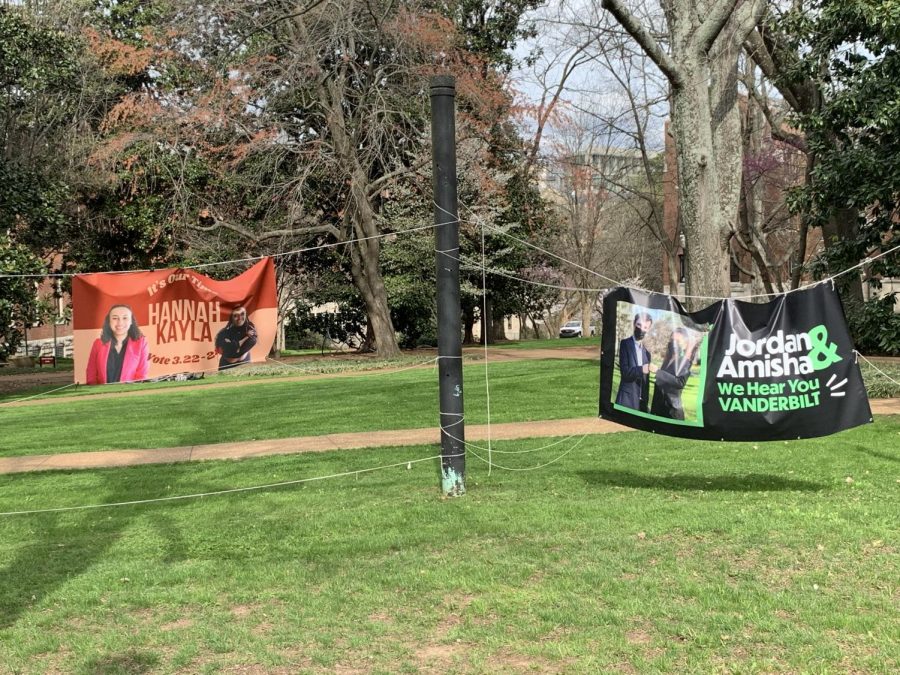 Let’s get real for a second.

If a group of Black students had sloppily thrown together a last-minute, ill-prepared campaign with an underdeveloped platform that lacked originality, solely on the basis that we wanted a second option, against a ticket with an already extensive platform addressing diverse student needs, and not on the basis that we believed our platform to be better, we would be called lazy and unprofessional.

Late Monday night, March 22, juniors Grant Bowlds and Lauren Harmon emerged as a write-in ticket for the ongoing Vanderbilt Student Government (VSG) presidential elections, after the withdrawal of presidential candidate Jordan Gould. As opposed to actually believing that they had a better platform and campaign initiatives, they chose to run merely to give students a “choice of representation.” In reference to the Bruns/Prowell ticket, Grant Bowlds even voiced in the campaign GroupMe, “All the work Hannah and Kayla are doing is great, I just want to provide another option for students to have their voices heard.”

Despite voicing approval of their work, giving Hannah Bruns and Kayla Prowell an “easy win” was out of the question.

The unpreparedness of the Bowlds/Harmon platform showed through. It included points such as VandyRide expansion, previously included in Gould and Amisha Mittal’s platform, that were less thought out and limited. They allowed students to text them and voice their opinions and questions about their campaign, but ignored questions as to whether they “understood the major issues and shortcomings of their campaign,” simply stating that they have “lives outside of the campaign.” Newsflash, we all do.

It’s notable that the grievances with the VSG election are largely not with Hannah and Kayla, but are with the fact that a deserving platform will have an “easy win.”

“It’s not a race if no one else is running,” a supporter of the write-in Grant and Lauren ticket wrote in the campaign Groupme, with many supporters expressing similar sentiments, especially their discontent with a “shoo-in” candidate.

However, I must ask, if you see nothing wrong with the Bruns/Prowell platform or their ideas, what is the obsession with making the campaign harder for them? Why is a “hard win” more valid, especially when the candidates in question already have the support of various organizations on campus committed to the goal of diversity and inclusion?

Bowlds and Harmon have now halted their pursuit of receiving official write-in approval, after accumulating over 150 signatures, out of the 250 necessary. However, other last-minute write-in tickets like the Eric Lewis/Tingyu Zhang ticket continue to campaign in Groupme’s and on Instagram accounts.
Despite the Bowlds/Harmon campaign end, the principle of running for the sole sake of addition, as opposed to good addition, needs to be evaluated.
Now let’s stop being real and take a moment to pretend.

Pretend that Jordan never dropped out. Pretend that his fraternity’s alleged racism went ignored. Pretend that instead Hannah and Kayla dropped out amid the allegations of negative campaigning and “weaponizing their identities” as Black women. These are just a few examples of mistreatment the two have endured throughout their campaign, which has made this anything but an “easy race,” something it will undoubtedly be again called by some if they win. Pretend that the leading ticket was championed by someone who is white, a man and is Greek-affiliated. Would there be as much pushback against a “shoo-in” race?

It would be ignorant to assume that the ongoing Abolish IFCPH Greek Life movement (AGL) has not influenced the election. The turnout at the March 17 VSG Senate meeting on the possible reallocation of Greek housing was huge. Most students in attendance voiced concerns against Greek Life and the space it takes up on campus. Coupled with the increasing support the movement has garnered, to act as though the fate of Greek Life was not a factor in the sudden Bowlds/Harmon campaign screams of being under a rock for the last two weeks. While AGL and Greek Life is not acknowledged on the Bruns/Prowell ticket, it’s very interesting that the Bowlds/Harmon ticket included its existence, with Bowlds being heavily involved in Vanderbilt’s Sigma chapter of Pi Kappa Alpha (PIKE) fraternity, previously serving as Vice President of the chapter in 2020. Both tickets had points regarding campus collaboration, transparency, environmentalism and campus safety, among others (with a stark divergence in specificity and originality), but the biggest notable difference was Greek Life’s presence on the Bowlds/Harmon platform.

While they declined to comment on their involvement in Greek Life in a recent Hustler article, it is not far-fetched to wonder if their write-in campaign would’ve come into fruition had the “shoo-in” candidate been a part of Greek Life.

The events of this VSG election, especially the vilification of Hannah and Kayla, are in line with the undermining often (over)qualified marginalized students face on this campus, especially already racially or ethnically marginalized women and femmes. I know I’m going to be accused of it: of weaponizing my identity. Of playing a misdefined version of “identity politics.” Of playing the “minority card.” But when you really step back, get real and imagine if the roles were reversed, would all of this still be happening?

While I support the Bruns/Prowell ticket, I am not a campaign member and while I don’t consider anything I have written slanderous, my words should not be affiliated with nor reflect badly on Hannah Bruns and Kayla Prowell.