The Commodores built an early lead but were unable to hang on late. 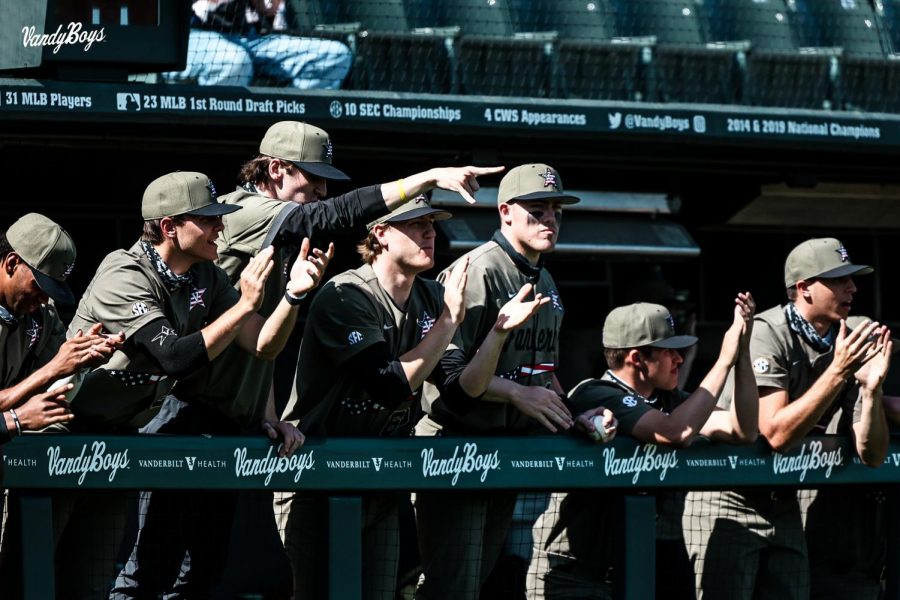 Vanderbilt baseball loses the third of a three-game series to South Carolina on March 21. (Twitter/@VandyBoys)

Following a series-clinching win on Saturday afternoon with Jack Leiter’s historic no-hitter, the No. 2 ranked Vanderbilt Commodores fell to the No. 16 South Carolina Gamecocks 6-5 on Sunday afternoon at Hawkins Field. The Commodores started strong, but the Gamecocks pulled away late, as they scored six of the game’s final seven runs.

“We don’t always have success during the course of the weekend, and some of these weekends can be tough. As a player, you just have to rebound. There’s not much else you can do,” Vanderbilt Head Coach Tim Corbin said.

Vanderbilt started the game with sophomore Thomas Schultz at the mound. Schultz started off strong and was cushioned with an early lead. In the top of the first, he retired all three of South Carolina’s batters with relative ease, notching two strikeouts. Schultz was helped out by his teammates in the bottom of the inning, as freshman outfielder Enrique Bradfield Jr. first got on base with a leadoff walk. Bradfield Jr. stole second, stole third and then was driven home by junior Dominic Keegan’s RBI single. The next batter, junior Tate Kolwyck, reached on a fielder’s choice play that left Keegan out at second. With only one out and Kolwyck on first, up came sophomore CJ Rodriguez, who sent a screaming home run to left field, making the score 3-0.

Schultz struck out two more batters in the top of the second, getting out of the stress-free inning quickly. The Commodores had no offensive production in the bottom of the second. However, another quick trip to the mound for Schultz in the top of the third followed by another RBI from Rodriguez — a single up the middle that drove in Keegan — left the Commodores with a comfortable 4-0 lead after three.

After 11-straight innings without allowing a man on base, the tide for the Commodores finally turned. South Carolina opened the fourth inning with back-to-back solo shots: first by junior Brady Allen to left field and then by sophomore Braylen Wimmer to center field. Schultz finished the inning with some help from his defense after giving up two runs and three hits, with the Commodores up 4-2.

To start the bottom of the fourth, junior Isaiah Thomas struck out looking. However, next up for the Commodores was senior Cooper Davis — Davis was walked, which prompted the Gamecocks to make a pitching change and replace Julian Bosnic with Brett Kerry. The first batter Kerry faced, senior Jayson Gonzalez, smoked a triple to right field, bringing Davis to home plate and increasing the Commodore lead to 5-2.

Sophomore Brennan Milone started the fifth inning with a single for the Gamecocks, prompting Vanderbilt to make a pitching change and replace Schultz with junior Ethan Smith. With a man on first, Smith walked two batters, loading the bases. South Carolina scored on an RBI groundout from Allen that turned into a double play at first and second. With two outs, Wimmer singled to bring the runner at third home. Smith made it out of the inning with the score now 5-4 in favor of the Commodores.

From the bottom of the fifth through the bottom of the sixth, both teams were left in check, and not much action occurred. In the top of the seventh, with the score still 5-4, the Commodores made a pitching change, replacing Smith with sophomore Nick Maldonado. Maldonado notched two strikeouts and forced a groundout to end the inning with the Commodores still up one.

In the bottom of the seventh, the Commodores couldn’t get any offense going. Heading into the eighth, the South Carolina bench was fired up, as they felt the momentum start to swing after keeping the Commodores off the board once again.

After South Carolina got runners on first and third in the top of the eighth, the Commodores made a pitching change and replaced Maldonado with junior Luke Murphy. Quickly after, Allen scored for the Gamecocks after tagging up on an RBI flyout from junior Wes Clarke. David Mendham then singled to right, loading the bases with only one out. Bradfield Jr. made a terrific diving catch for the Commodores for the second out of the inning, but South Carolina’s runner at third tagged up and scored. For the first time of the game, the Gamecocks took the lead, 6-5. Murphy was able to get through the rest of the inning unscathed, but the damage was done.

In the bottom of the eighth, Kolwyck made it to first base on a hard-fought, diving attempt but was later ruled out on an attempt to steal second, which ended the inning. To start the ninth inning, the Gamecocks got runners on first and third. Murphy, however,  kept South Carolina at bay and held their lead to one. Unfortunately for the Commodores, they were not able to get a spark on offense in the bottom of the ninth. Thomas singled and then stole second, but his teammates were unable to drive him home.

“Kerry pitched a hell of a game. They beat our bullpen when they needed to, and our bullpen isn’t easy to beat,” he said.

The Commodores’ loss makes them 15-3 on the year and 2-1 in conference play. They’ll face the Lipscomb Bison at Hawkins Field this Tuesday at 6:30 p.m. CT.