The Hustler sat down with students to field their thoughts on the tickets’ platforms, campaign violations and changes to the election timeline. 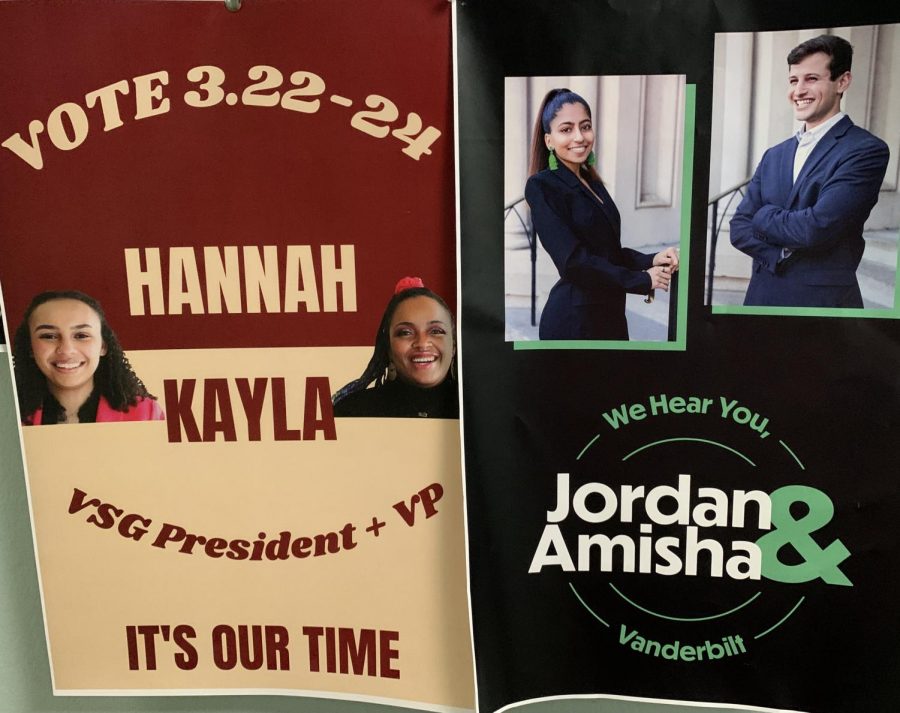 Amid the 2021 VSG presidential and vice presidential campaign season, students are working to make informed voting decisions and learn about each platform. Campaigning will resume on Monday, March 22 at 8 a.m. CDT, and students will cast their ballots for either the Hannah Bruns/Kayla Prowell ticket or the Jordan Gould/Amisha Mittal ticket by Wednesday, March 31.

Students shared their thoughts on the candidates’ platforms and recent developments in the election thus far.

He noted that he had first come into contact with Mittal when she reached out to get feedback on the first-year student experience for VSG earlier in the year, and, ultimately, it was their platform point aiming at improving the first-year experience that drew him to support their campaign.

“One thing [Jordan and Amisha] are focusing on is planning events specifically for [the Class of 2024] so that we can build that community,” Johnson said.

He said that this focus was the most pressing point for him, given the cancellation of most in-person events and an overall lack of community this year. He also noted the divide between those living on Commons and main campus.

“[First-year students] are pretty much all living in isolation right now, and it doesn’t seem like admin is looking for any way to compensate us for what we’ve been through this whole year,” Johnson said.

Gabby Jones, first-year liaison for Vanderbilt’s NAACP chapter, has been following the election through Instagram and plans on voting. Since NAACP endorsed Bruns and Prowell, she was much more familiar with their platform at the start of campaigning.

One platform point in particular that drew Jones to the Bruns/Prowell ticket was their desire to add an additional cultural complement to the current AXLE requirements. She personally enjoyed learning about African and Caribbean heritage in her U.S. Immigration and Identity course and thinks similar courses would be a valuable experience for everyone.

“I feel like it’s really important that people take charge of their education and ingrain some type of AXLE requirement that would help them do that,” Jones said. “This is why I chose the College of Arts and Science instead of maybe choosing Engineering or Peabody, which would go to my business side, because AXLE requirements have done a pretty good job of helping me keep my education pretty liberal.”

Sophomore Emma Alexander, who said she is friends with Mittal, is in support of the Gould/Mittal ticket and noted how their platform addressed issues she hadn’t previously considered, like getting a more diverse faculty in the UCC.

“That would make so much sense that it would be hard to talk about issues with someone who is possibly perpetrating them,” Alexander said.

She also appreciated the practical considerations of the campaign such as providing free feminine hygiene products in all bathrooms on campus and free test preparation materials for the MCAT and LSAT.

Sophomore Tariq Bolden supports the Bruns/Prowell ticket but is not affiliated with the campaign. He said that he chose to support the campaign because he identified with the values of equity and inclusion. Bolden commented on student emotions following recent events involving “multiple legal challenges” under review by the VSG Elections Commission.

“This year, there’s a lot of drama and negative energy that’s taking away from the campaigns,” Bolden said. “Disseminating the truth from what’s not the truth is difficult for those who don’t know both sides of the spectrum.”

“Before all this happened I was in the middle, maybe still leaning towards Hannah and Kayla, but after seeing that statement from Jordan and Amisha, it was kind of weird that he was blaming Hannah and Kayla for robbing them of a clean and fair election,” Jones stated.

She expressed frustration with the lack of a clear explanation regarding the violation and temporary suspension.

“I feel like there is a lot of shady stuff going on,” Jones said. “People in the [Hannah and Kayla’s supporters GroupMe] have been asking Hannah and Kayla what is going on. I don’t understand why they can’t tell us what the negative comments were.”

Jones had commented on Gould and Mittal’s Instagram post releasing their statement, expressing a desire for more unity in addressing what had happened. Comments have since been diasbled, and no prior comments can be viewed.

“Nothing slandering this statement at all! Thank you for realising this @jordanandamisha! However, I wished both parties released a statement in unity. With both parties signing off on the allegations,” Jones’s comment stated.

First-year Sriya Nemani expressed similar sentiments with Jones. While she is not affiliated with either campaign, Nemani supports the Bruns/Prowell ticket and commented on its recent allegations of negative campaigning.

“[Hannah and Kayla] can’t control someone outside of their campaign saying things on a social media platform,” Nemani said. “The best thing they can do is to conduct their behavior in a way that is not inflammatory, which I think they’ve done.”

Alexander commented on the effect the comments had on Mittal.

Sophomore Robby McCarthy, who was formerly affiliated with the Gould/Mittal ticket, emphasized his support for both campaigns and expressed hope for VSG to reunify at the close of the election.

“Both campaigns are very passionate—they want to help Vanderbilt,” McCarthy said. “Within VSG, there is a lot of division now, and I don’t think that was anyone’s intent.”

Johnson agrees that there is a need for more unity and ultimately views both tickets as potential for positive change.

“Both campaigns have a very good platform, honestly, so I feel like no matter who wins the campus will be in good hands,” Johnson said.

In regards to the controversy as a whole, Alexander stressed the importance of considering the impact words can have on the candidates.

“I think there are a lot of good points in talking about a candidate as a whole, but when that becomes targeting people or speaking bad on their character when those claims aren’t founded or lumping people together, I feel like it can be too aggressive,” Alexander said. “We need to remember these are people that have feelings and emotions and saying terrible things about their character because you don’t like their platforms is just not a great thing to do at any point in time.”

Regarding campaign accountability, Bolden commented on the Election Commission’s clarification of Legal Order 2021-001, which states that campaigns must make it clear that “they do not condone negative campaigning” and must promptly disavow such behavior upon notice.

“I don’t think it’s fair to put a policing order on [either campaign] to silence people who speak negatively about other people,” Bolden said. “At the end of the day, I can’t be held accountable for anyone’s actions but my own—we should all just be the best versions of ourselves, only speak the truth and try not to buy into lies or fictitious testimonies.”

Jones noted she was disappointed by the Election Commission’s decision to extend the election period until March 31.

“Why are we pushing this back a week?” Jones asked. “It’s just opening up too many wounds. I feel like we should just vote and get it over with right now.”

Johnson, however, felt the decision to postpone voting was ultimately the right decision.

“It allows people more time to make a decision and more time to vote, so it’s just better all around honestly,” Johnson said.

Alexander hopes the pause will help refocus the election on each tickets’ platform rather than the recent controversy.

“I think that giving it some cooling down time and maybe some time without any press is probably good for all sides, to let things cool off and give everyone a second to breath and recollect themselves, so it can get back to the issues and the platforms, which is an important place to be judging the campaign from,” Alexander said.