With half a year to go until Lea’s Commodores take the field, his coaching staff has been hard at work optimizing player development and installing a new scheme. 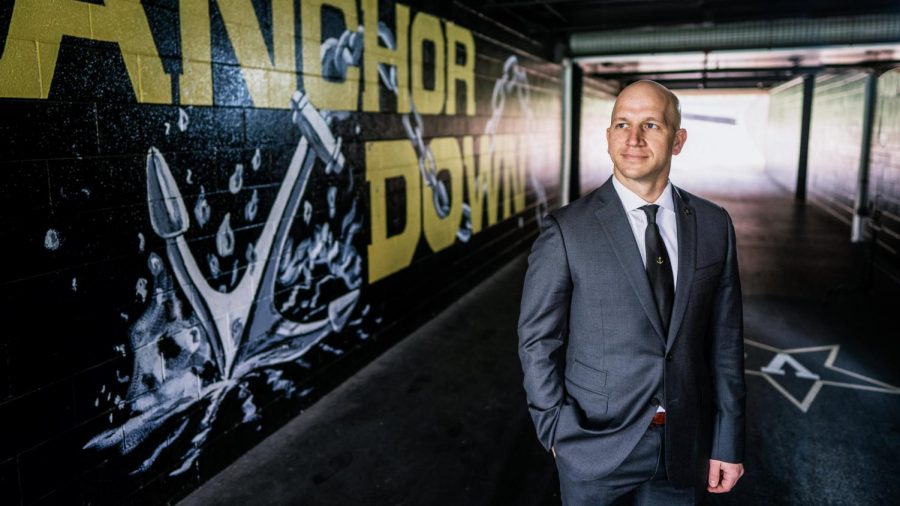 In 24 weeks, the Vanderbilt Commodores will face off against the East Tennessee Buccaneers in what will be Vanderbilt head football coach Clark Lea’s first game as a coach in Nashville. Until then, he and his staff are tasked with installing his scheme, going through practice drills and navigating the team’s moving personnel parts.

In Friday morning’s press conference, Lea addressed the media and talked about his coaching staff’s broad goals for the team as it adjusts from former Vanderbilt head football coach Derek Mason’s scheme to Lea’s.

“My focus right now is on our energy, enthusiasm [and] transitions,” Lea said. “Attention to detail—I want to make sure we don’t lose the work we put into this point to start on that foundation… Practice one, they were learning the drills we were doing. Practice two, there was a little more comfort in that.”

Lea also delved into his big-picture coaching philosophy as the team progresses through the spring.

“[We’re] trying to train them to clear the static and focus on what they have to do… to not allow themselves to be distracted by all the other inputs,” he said. “‘Where am I going? How am I being coached? What are the fundamentals we’re working on? What is my alignment?’ That can slow you down… Let’s make sure that we are on our marks when it comes to the engagement, the enthusiasm, the energy, because most times in college football, if that’s right, if you have the right spirit, you’re going to be in a good competitive position.”

He had a special aside for his approach to development, especially for the defense.

“For me, it’s way more how we do things than it is who is doing them,” Lea said. “This is a continuum; it’s a progression line… My experience in college football has been that no one is ever finished developing or finished growing. We will get through 15 practices, we’ll get through our spring game, and we’ll have a feel for what the trajectory is of each player. But hopefully, we have the best developmental system in the summer. We lean on those systems to compound the learning, compound the fundamental development of each player.”

Lea’s scheme positioned his Notre Dame defense to rank among the top in the country last season, which largely led the team to the College Football Playoffs. His next goal: replicate and build on the success at Vanderbilt. On Friday, he went through his plan for the scheme’s installation.

“I expect to get through a pretty healthy amount of install, particularly with situations we’re going to be addressing through the spring,” Lea said. “If we need to pull back a little bit [in the summer] to make sure that we’re just hitting our fundamental marks, that to me is as important as anything: where our fundamental base [and] technical base [are] out of spring, so that we can compound on that through the summer… We’ll have the entire package in by the end of [spring].”

Lea also touched on the excitement and buzzing frenzy behind the scenes at the McGugin Center.

“This has the feel of a startup. Everyone’s in the hallway and passing the phone around and just energized around Vanderbilt football,” he said. “It’s a very natural thing too; it’s not something that we have to force.”