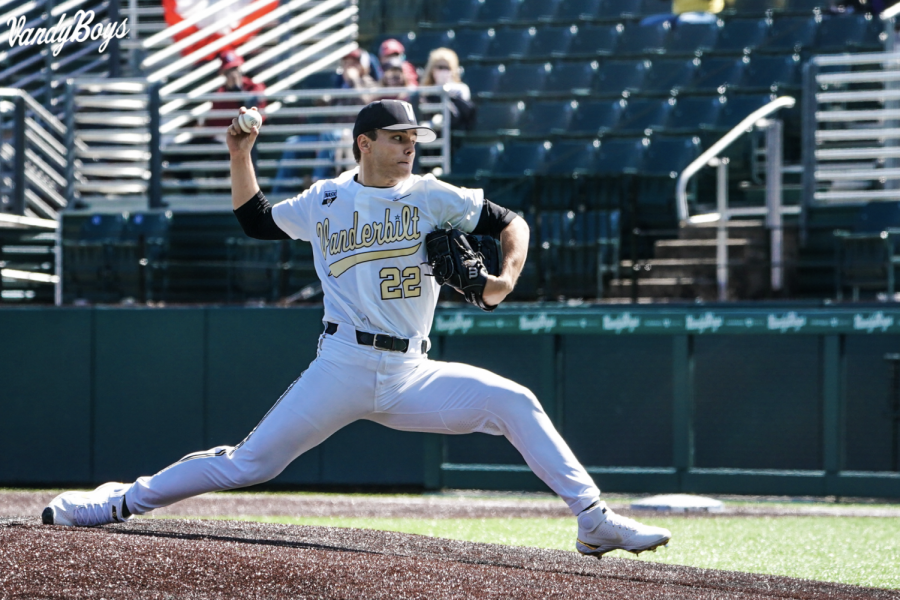 Jack Leiter in his complete-game no-hitter against South Carolina on March 20 2019. (Twitter/@VandyBoys)

Jack. Leiter. That’s all that needs to be said about this one.

Leiter pitched Vanderbilt’s first no-hitter since Kumar Rocker against the Duke Blue Devils in the 2019 College Baseball Super Regional. The no-hitter is also the fifth in program history, and first regular-season no-no since 1971.

Vanderbilt rolled out the second of its two-headed monster at the top of the rotation, with Leiter taking the mound for his fifth start of the season and first career SEC start. Like Rocker the night prior, Leiter dominated early and never looked back. Utilizing a mix of his trademark pace along with overpowering fastballs—most of which clocked in over 95 mph—Leiter registered nine strikeouts in his first four innings of work, including striking out the side in the second.

In a historic performance, Leiter confused Gamecock hitters time and time again. He appeared to gain strength and confidence as the innings progressed, inducing weak contact and piling up strikeouts. The righty recorded 16 strikeouts over the course of nine no-hit innings. His only blemish on the day was a walk surrendered to the first batter of the game and his 120 pitches were the most of any start this season.

Although his offspeed pitches weren’t locating as well as he liked in the early innings, he still managed to use the fastball to keep hitters off balance.

“The offspeed pitch wasn’t there at the beginning. I couldn’t find a feel with the zone [in the beginning],” Leiter said.

However, as the game went on, Corbin knew he wasn’t going to take Leiter out.

“When he got into the eighth, we gave him a little bit of direction and he was attacking the zone,” Corbin said.

Vanderbilt’s offense complemented the historic pitching with clutch runs when they were needed most.

It was the Commodores that struck first to break the scoreless tie, setting the stage for Leiter’s dominance. In the top of the second, following a walk by CJ Rodriguez, Tate Kolywck sent a 2-0 pitch into the seats in left center for a home run for the first two Commodore runs of the game.

“Tate’s hit was big. You never know when you are going to get runs. South Carolina can really pitch. Hits in this series are very expensive. To get those two big knocks, you can never score enough runs against a good team like this,” Corbin said.

Gamecock starter Brannon Jordan was almost as impressive, if not for the two runs allowed. He used a combination of off-speed pitches to fool Commodore hitters despite a high number of deep counts worked. He finished the game with a final line of five innings pitched, two earned runs and nine strikeouts on 98 pitches thrown.

In the bottom of the fourth, Vanderbilt threatened to increase the lead after Isaiah Thomas smoked a liner off the left field wall but the Commodores could not capitalize. Despite walks to Rodriguez and Bradfield Jr. to load the bases, Jayson Gonzalez struck out swinging to end the inning.

Later, Vanderbilt again faced an opportunity with two outs and could not bring the runners home. An Isaiah Thomas single to right field followed by a Bradfield Jr. double into left field moved runners to second and third. Unfortunately for the Commodores, Gonzalez grounded to shortstop to end the inning.

Kolwyck added on two more insurance runs in the bottom of the eight, blasting another two-run homer into the left field seats. Bradfield Jr. then hit a sacrifice fly to bring in Thomas to give Vanderbilt its final run of the game.

Despite the timely scoring, when looking back on this game, the historic pitching performance of Leiter will always be remembered.

The VandyBoys win moved them to 15-2 on the year. They’ll face the Gamecocks in the final game of the series on Sunday, with first pitch scheduled for 1:00 p.m. CT.