The injuries could have hurt Davis’ morale, but he used them as an opportunity to develop his signature positivity. 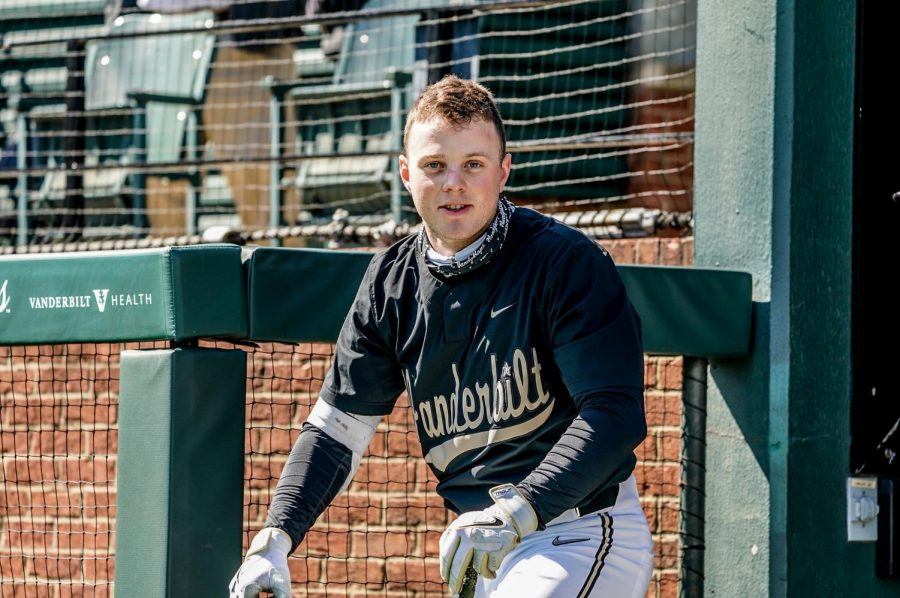 Cooper Davis in the dugout before a game. (Hustler Multimedia/TrumanMcDaniel)

Getting hurt in the first at-bat of his senior year was not the way left fielder Cooper Davis expected to kick off his final season as a Commodore.

He fouled off a pitch Feb. 22 against Wright State, and after making contact with his bat, the ball popped up towards his face. He would later be diagnosed with a broken nose.

“I was super lucky that there wasn’t any other damage besides the broken nose,” Davis says. “Any time you get hit in the face like that, there’s orbital bones and other issues like concussions.”

Davis returned to the field on March 5 against Illinois-Chicago and debuted a cage on his batting helmet. He says the cage is required for the first month-plus after his injury in order to make sure his nose has time to heal.

“Getting used to the cage honestly took a couple of days of taking batting practice with it,” Davis said. “I’m still trying to get used to it, but I think I’m pretty comfortable with it now.”

Davis has spent much of his Vanderbilt career working his way back from injury, and the broken nose was just the latest in a list of setbacks he has had to overcome.

He played in nine games as a freshman before he broke his wrist diving for a ball in pregame warmups in early May. He had a plate put in his wrist.

Davis also missed time late in the 2019 season with an undisclosed injury.

“The biggest thing I’ve learned going through injuries is just trying to focus on positive things and looking at my situation and how lucky I am to be playing at Vanderbilt,” Davis says. “If you look at the negatives when you’re always hurt and thinking ‘why is this always happening to me,’ you start feeling sorry for yourself. I think that’s a dark hole that athletes can fall into when they get injured.”

The positive attitude he developed while recovering from injuries has spread to the rest of the team, and head coach Tim Corbin is grateful for the impact Davis’ attitude has on the program.

On the field, his impact has been just as significant.

Davis has been the leadoff hitter for the past two seasons. He’s known more for his ability to get on base than his power, but he hit his first collegiate home run on March 9 versus Memphis.

“He’s an adept hitter, and he can move the ball to the middle of the field,” Corbin says. “He now is probably a little brainwashed after he hit a wind-aided home run to center field, and now he thinks he might have a little bit of power.”

Jokes aside, Davis’ bat is starting to heat up. After leading the team with 24 hits and putting together a 14-game streak of reaching base last season, he’s still catching up this year after a six-game absence due to the broken nose. His on-base percentage is .306 as of March 18, and he’s careful picking his pitches, as evidenced by his five walks in only eight games.

Unfazed by his tough start to the season, Davis is locked in on getting better one day at a time.

“Our biggest focus is just trying to stay in the moment, especially for me as a senior,” Davis says. “I’m running out of time playing college baseball. I’ve only got about three months left, so I’m trying not to look too far in the future and trying to take every day as it goes.”