The Commodores topped rival Kentucky for their fourth SEC victory this season. 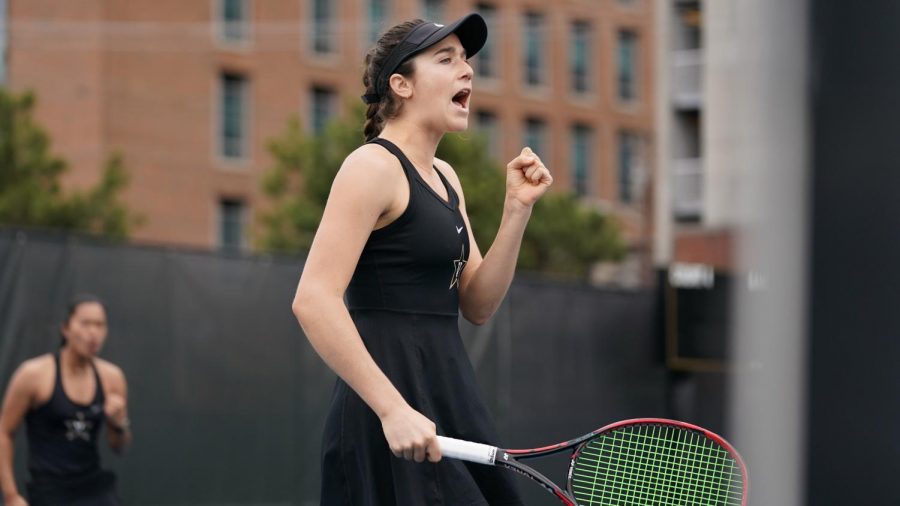 Emma Kurtz celebrates a point against Kentucky on March 14, 2021. (Twitter/@VandyWTennis)

Vanderbilt lost two of the three doubles matches before winning four out of the six singles matches in order to defeat the Wildcats.

After the match, head coach Aleke Tsoubanos said of her team:

“We put ourselves in a challenging situation and competed on all the courts really well.”

On Court Three of the doubles match, the Commodores cruised to a 6-0 victory by fifth-year Christina Rosca and freshman Anessa Lee without any sense of doubt.

This convincing victory carried out to the No. 1 court just as the hope for the Commodores looked bleak. Vanderbilt, down 5-2 with its backs against the wall, needed a spark. Unfortunately for the Commodores, the quick lead of the Kentucky Wildcats proved too much for the strong duo in Holly Staff and Anna Ross as Vanderbilt fell to Kentucky 6-4.

Meanwhile on Court Two, sophomore Marcella Cruz and fifth-year Emma Kurtz were also faced with a large deficit at 4-0. In the end, Kurtz’s serve was broken, and the Wildcats took the set, sealing them the doubles point. The dominant Commodore victory on Court Three was not enough as Kentucky’s two other doubles pairs  edged out Vanderbilt, and the Wildcats earned the doubles point.

Staff’s brilliant play at the tail end of her doubles match carried over to the No.3 singles match as she led Kentucky’s redshirt-senior Lesedi Jacobs 2-0. Just as Staff looked to take the first game, Jacobs responded. Staff and Jacobs traded leads at the beginning, but Jacobs’ momentum proved too much for Staff as two 6-4 victories led to another Kentucky point.

On Court Five, Cruz was hungry, confident and ready to finish the day as she won the first set and held  a 2-0 lead in the second set. Cruz ended up finding herself in double-deuce as she led 5-4. Kentucky’s Elizabeth Stevens fought back and took the second set. Cruz followed as she capped off the day with a 6-3 win, and the point went to Cruz.

In a riveting contest on Court Four, Lee’s serve beat Kentucky’s Carla Girbau to take the first game, and Lee took a 2-1 lead. Lee surged to win the first set 6-3. After Girbau went on a run to force a third set, Lee started the third set down 2-0, but she fought back to even it up at 3-3, cheered on by the rest of her teammates. With results elsewhere, it appeared likely that Lee’s match would be critical as she had a 5-4 lead in the final set. On the second try at match point, an error by Girbau secured the match for Lee, leaving the entire day in the hands of Emma Kurtz.

Trailing one set, Kurtz needed to lock in. Kurtz won a hard-fought second set, 7-5. Kurtz won the first three games of the decisive set accompanied by a shout of “Let’s go!”. Kurtz reached match point only seconds after Lee’s victory, and a forehand out of bounds by Molina secured a 4-3 comeback victory for Vanderbilt.

“[She was] not letting that second set go, and I think she began to play better,” Tsoubanos said of Kurtz.

The Commodores’ 4-3 victory over the Wildcats epitomized the grit and passion needed to remain a top-15 team. This victory over regional rival Kentucky is a momentum booster for the Commodores, as Vanderbilt gears up to host the Texas A&M Aggies on Saturday, March 20 at 12:00 p.m. CT.