Vanderbilt topped the Kennesaw State Owls due to the Commodores’ relentless attack and ball control. 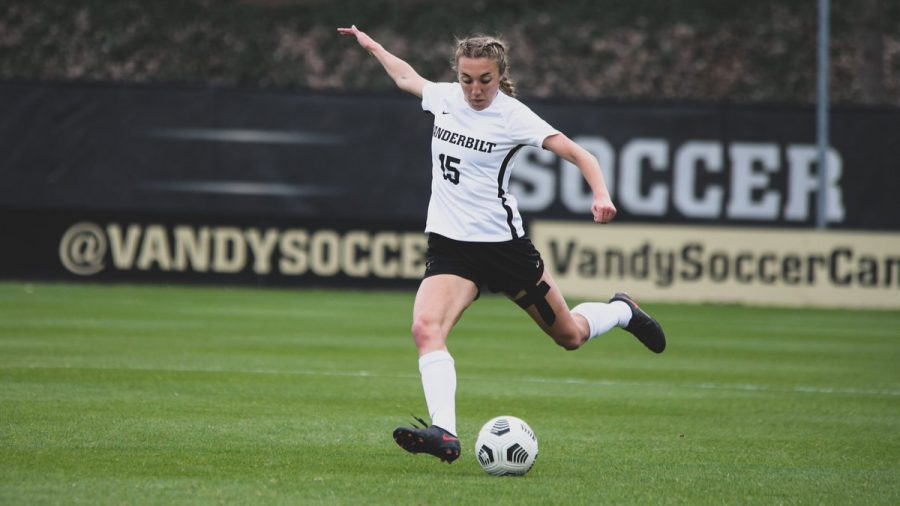 The 4th-ranked Vanderbilt Commodores added on to their success from the fall as they controlled the Kennesaw State Owls in a 3-1 victory in the two teams’ first-ever matchup.

Vanderbilt competed in two exhibition matches this spring, but the atmosphere at Vanderbilt felt different right as the whistle blew at 3:05 p.m. CT. The Commodores played in their first non-exhibition match since Nov. 22 when they topped Arkansas in the SEC Championship.

Right from the get-go, Vanderbilt controlled the tempo. The Commodores’ composure and patience with the ball set the tone for the game. In the first half, Vanderbilt’s attack was strong, but the team was not able to find the back of the net. The Commodores had nine looks at the goal, but never capitalized. Senior forward Haley Hopkins, the leading goal scorer for the Commodores, had four unsuccessful attempts at finding the net, but that did not discourage her and her teammates from continuing to attack.

The Kennesaw State Owls kept it a close game remained very much in the game due to the outstanding protection by redshirt-sophomore goalkeeper Dylan Pixton. On the other side, Vanderbilt senior goalkeeper Sarah Fuller was fortunate enough to not face any shots on goal in the first half because of the fierce back-end play. These key stops, such as the 50-50 balls and one-on-one matchups won by defenders Maya Antoine, Myra Konte, and Ella Shamburger were integral in Vanderbilt staying on the offensive end of the field.

A game the Commodores expected to be a tale of two halves was much of the same as they remained scoreless. Much of the confidence of the highly-favored Commodores seemed to evaporate. As the game went on, a Vanderbilt trap-game loss seemed to be in play.

For the Commodores, however, that narrative was not on their agenda. Midway in the second half, the game was still tied at 0-0, but Vanderbilt was due for a goal. The Owls’ one shot on goal paled in comparison to the Commodores’ 10 shots, but the game still stood at 0-0.

The Commodores’ ferocious pursuit at the net finally came successful.  Right as Vanderbilt seemed to enter panic-mode, the tides turned and Vanderbilt delivered. Senior Maddie Elwell assisted Madi Allen, who put Vanderbilt on the scoreboard and saved the day in the 65th minute.

The stout defense of the Kennesaw State Owls was slipping as the composure and relentless attack by the Commodores suddenly came into fruition. Nearly two minutes after Vanderbilt’s first goal, Elwell assisted speedy midfielder Raegan Kelley, who directed a header to the right side of the net. Minutes later, star forward Haley Hopkins executed an athletic push to goal as she put the Commodores in the driver seat off of Elwell’s third assist.  In just four minutes, Vanderbilt built a 3-0 lead over Kennesaw State.

With less than ten minutes remaining senior Kendall Hart scored for Kennesaw State, but it was too late for the Owls to come back.

After the win, head coach Darren Ambrose emphasized the impressive attack of the Commodores, but felt that there were too many missed opportunities. When asked about what changed from the first half to the second half, Coach Ambrose gave kudos to his players eventually capitalizing on the opportunities.

“We knew we had to continue what we were doing,” Ambrose said.”When you bang on the door that many times you eventually will expect one [a goal] to open…We are creating many chances, and at this level when you score three goals we know we have done alright.I just think we had too many technical mistakes that I would not have expected.”

The Commodores’ 3-1 win is the first official win of their spring season.  Vanderbilt returns to the pitch on March 21 with a cross-town meeting against Lipscomb University in an effort to build up momentum before the NCAA Tournament in May.