For the first time since 2016-17, Vanderbilt finds itself moving onto the next round of the SEC Tournament. 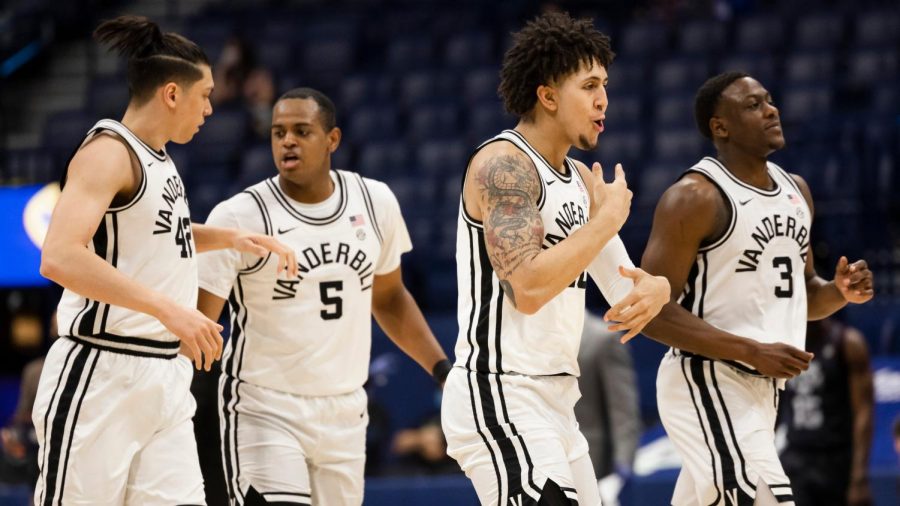 The Commodores aren’t done. Not yet.

Vanderbilt, the No. 12 seed in the 2021 SEC Tournament, played host to the No. 13 seed Texas A&M Aggies on Wednesday in a win-or-go-home matchup. And the Commodores gave head coach Jerry Stackhouse every reason to be excited, as they ran away with a 79-68 victory, keeping their season alive another day and notching their first SEC Tournament win since 2017.

“I’m super excited for our guys. Happy for them; happy for our fans,” Stackhouse said. “It’s been a long time coming…But we’re excited for the challenge [against Florida] tomorrow.”

Vanderbilt took a few minutes to get its bearings in Bridgestone Arena. The Aggies scored the game’s first basket in just 11 seconds off an Emanuel Miller layup, then took another 4-2 lead a minute later. But two minutes and 45 seconds into the game, a long-range three pointer from Scotty Pippen Jr. sparked a fire for the Commodores. They took a 5-4 lead and never looked back for the duration of the first half.

“Offensively, we were hitting shots,” Pippen Jr. said of Vanderbilt’s first-half performance. “Max, DJ, Wright—everyone got involved. I thought that just carried on for the win.”

It was a three-point barrage of sorts for Vanderbilt; despite streaky performances from deep this season, the Commodores shot a solid 38% in the first half and at one point made threes in four-straight possessions. Evans led the team with 12 first-half points, including two threes on four attempts, and DJ Harvey had eight first-half points and two threes of his own.

“My shot was falling. I thought I was a lot more aggressive. I felt more comfortable out there. Coaches have been telling me, the guys have been telling me, in order for us to reach our goal I’ve got to start playing the game that they know I’m capable of playing,” Harvey said of his season-high 17-point performance. “I couldn’t do it without them.”

The Commodores were successful from three-point range, but much of what allowed them to jump out to a ten-point halftime lead was an abysmal offensive showing from the Aggies. Texas A&M looked the part of a team that has played just two games since Jan. 30 due to COVID-19 postponements; it made its first three of the first half, then proceeded to miss 11 consecutive attempts.

The Aggies closed out the half shooting 8.3% from three-point range. That, coupled with eight first-half fouls and seven first-half turnovers allowed the Commodores to jump out to a 37-27 lead at the half.

The second half, however, was a much different story. Finally, Texas A&M’s three-point attempts started to fall, and Vanderbilt returned to its middle-of-the-conference shooting form.

“I thought it was important that we played through it because you knew they were going to make a run,” Stackhouse said. “I thought we did a good job of just weathering the storm.”

Aggies’ freshman guard Hassan Diarra kicked things off by making the team’s first two three-point shots of the half, and Vanderbilt responded with one three—off six attempts.

A few Aggie layups later, Vanderbilt’s lead had dissipated. The Commodores, once leading by as much as 13 in the first half, found themselves deadlocked in a 45-45 minute tie with 11:31 remaining.

Blow after blow, the two continued to trade baskets until the six-minute mark. Vanderbilt again turned on the jets, burying a couple threes to give it some much-needed insurance; only this time, the treys came from freshman guard Trey Thomas, who made three of four attempts.

When the game reached the two minute mark, Texas A&M began intentionally fouling, and Vanderbilt—after three long years—found itself with its first SEC Tournament victory since the 2016-17 season.

Next up, the Commodores will face the Florida Gators in the second round, a team Vanderbilt has lost to twice this season. They’ll return to Bridgestone Arena with tip-off scheduled for 1:30 p.m.

“Talent is the floor, but your character, your integrity [and] your work ethic—that’s the ceiling. And I think we’ve got guys that really exemplify all three of those things,” Stackhouse said. “Maybe you look at [Florida] top-to-bottom and yeah, they’re a more talented team than we are. But when you put that integrity, that character and that heart and that competitiveness to the forefront, I like our chances.”