Head basketball coach Jerry Stackhouse discussed the upcoming matchup against an Aggies team that is playing “differently” after a 30-plus day, COVID-and weather-induced hiatus. 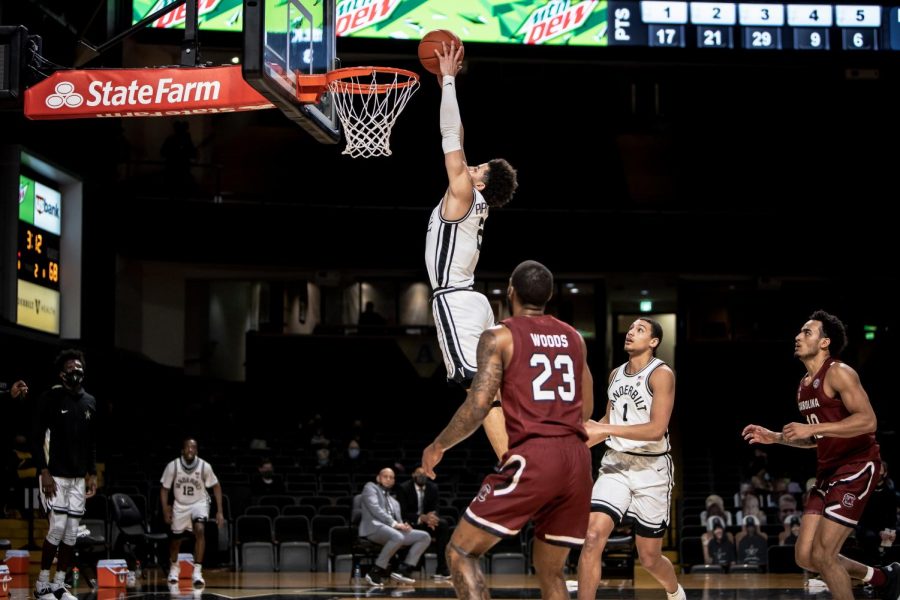 Vanderbilt’s regular season has officially come to a close, as the Commodores finished with an 8-15 overall record and a 3-13 Southeastern Conference (SEC) record in Jerry Stackhouse’s second season at the helm.

“Obviously, we didn’t have the success in the win column that we wanted, but I thought our team got better,” Stackhouse said in Tuesday’s press conference.

But in a season like no other, Vanderbilt’s SEC-worst 18.75% win-percentage is good for a 12 seed in the SEC Tournament, despite the conference having 14 teams. That’s because Auburn, which finished with a 6-11 conference record, is ineligible to participate in the postseason due to a self-imposed ban. Meanwhile, due to a plethora of COVID-19 postponements followed by a significant snowstorm, Texas A&M (2-8) has only played ten conference games.

As a result, No. 12 Vanderbilt will play its first round game against No. 13 Texas A&M in Bridgestone Arena on Wednesday.

“We’re really excited to start the second season. I think we’ve had a pretty interesting regular season, to say the least,” Stackhouse said. “Now, [the SEC Tournament] is a great opportunity to showcase who we are.”

Stackhouse certainly has a point—the regular season was an outlier, given that the Commodores were scheduled to play Texas A&M twice, but both games were postponed. Instead, the two teams will meet for the first time in the postseason, with Texas A&M having played just two games since Jan. 30.

While the Aggies have faced many regular season cancellations, the Commodores haven’t been dealt a easy hand, either. Stackhouse noted that his team is “not as whole” as they had hoped to be, having lost freshman guard Tyrin Lawrence and sophomore forward Dylan Disu to season-ending injuries. Injuries and illnesses have plagued the program all season, as Vanderbilt has had 12 of its 17 players miss games, totaling 58 missed games.

Come tournament time, while the Commodores may not have their leading-rebounder in Disu, Stackhouse has a plan for his starting lineup: prioritizing experience.

“We had a lot of different lineups over the course of the year, but I think going into the tournament, this is where your experience and your leadership should step up and hopefully help carry us,” Stackhouse said. “I’m looking to probably go with an older group to start, and just kind of see how things go from there.”

The Aggies are likely to take the floor against a veteran Commodore lineup. But for Vanderbilt, it’s much harder to know what to expect from Texas A&M, according to Stackhouse.

“Interesting matchup with Texas A&M [because] we haven’t seen them all year, so it’s not ideal. You’d like to have some tape of a team that you’re playing where you can go back and see things you didn’t do well or did do well against them, but we really don’t have a frame of reference from them other than teams we’ve seen them play as of late.”

Texas A&M’s only two contests in the past 38 days—a 63-57 loss to Mississippi State and an 87-80 loss to Arkansas— both came last week. Stackhouse said that there are some takeaways from those two narrow losses; notably, the fact that the Aggies are playing “differently than they were earlier in the year.”

“The last game against Arkansas had a lot of pace, and we hadn’t seen that much [of that] from them this year,” he said. “So we’ve got to be ready to play any type of style.”

Stackhouse emphasized the importance of film from Texas A&M’s last two matchups because the Aggies are “night and day” from the team they were to begin the season. After averaging 56.8 points per game in its first eight conference games of the season, head coach Buzz Williams’ team notched an 80-point outing in its most recent game—a total they had yet to reach in a 2021 conference game.

As the Commodores prepare to face a new-look Aggie team, Stackhouse says he sees it as an opportunity to compete, “more so than just the X’s and O’s.”

“I want to see us win the hustle points, win the deflections, win the 50-50 balls, win the rebounding. I think if we win the free throw game—if we’re able to find a way to come out and be ahead in those 40 minutes in [the aforementioned] categories,” he said, “It will give us a great chance to win the game.”

The Vanderbilt Commodores are set to face the Texas A&M Aggies in Bridgestone Arena at 6:00 p.m. CT on Wednesday, March 10. The winner will face Florida in the next round; the loser ends its season.

“I think, more than anything, we have to be us,” Stackhouse said. “When we get our open looks, we have to knock them down. Hopefully our guys are confident enough in the challenge to do so.”