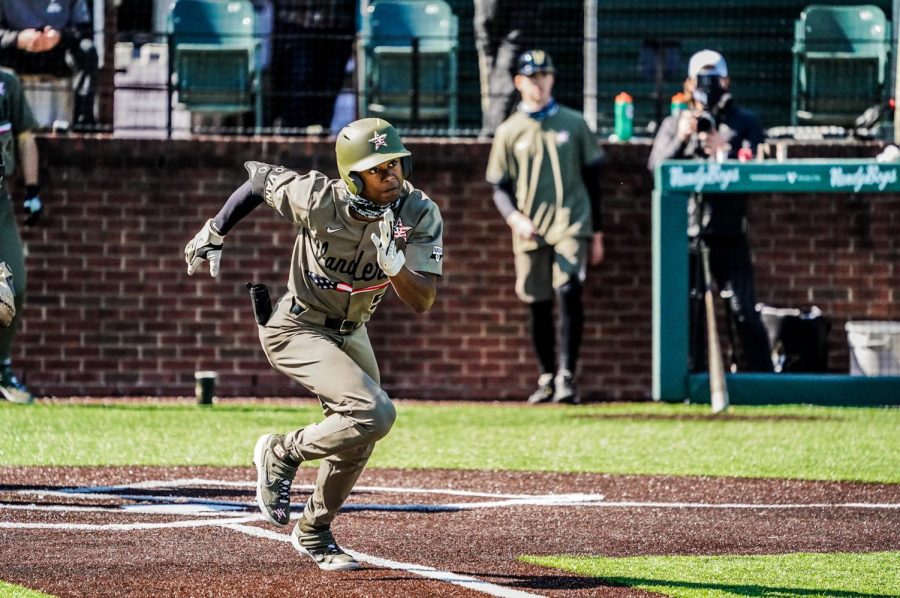 In a 4-2 win on Sunday, the Vanderbilt Commodores secured the series sweep against the University of Ilinois-Chicago Flames. In a game with less offense overall, Vanderbilt relied on its lights-out pitching, totaling 17 strikeouts and only 4 hits from the Flames.

In the top of the first, Illinois-Chicago put men on first and second base off of two walks from starting pitcher Jack Leiter. With the Flames quickly in a threatening position, the Commodores needed some strong defense to get out of the first inning.

Leiter gave them that and more.

Illinois-Chicago’s starting pitcher Ryan O’Reilly made the game competitive, keeping the Commodores quiet through three innings outside of a deep left field double from Spencer Jones.

Neither team had scored heading into the fourth inning and Leiter kept his momentum. The Flames went three up, three down, and Leiter closed out the top of the fourth with another strikeout against UIC’s Adam Weed.

The bottom of the fourth was not so quiet.

Following a walk from Carter Young, Dominic Keegan launched a double into left field, moving Young to third. Then, Parker Noland was forced out at first, but not without bringing Young home for Vanderbilt’s first run of the game. With Keegan on third, freshman Jack Bulger rocketed one over the left-center field fence, putting Vanderbilt up 3-0.

After a scoreless fifth inning, Leiter left the game in the top of the sixth with two men on base for the Flames, finishing the day with 11 strikeouts and only one hit allowed. He was replaced by sophomore Nick Maldonado, who gave up two runs off of infield hits but struck out two UIC batters to escape the sixth inning with the 3-2 lead.

In the bottom of the seventh, Noland brought Young home from third with a sacrifice fly to center field, giving the Commodores a little more insurance, increasing their lead to 4-2.

Thanks to four strikeouts in three solid innings from junior Ethan Smith and strong defense from Tate Kolwyck at second base, Vanderbilt kept the Flames scoreless and gave up only one hit in the seventh, eighth and ninth innings.

“[Ethan’s] a very versatile young man, and I was glad he got the opportunity to finish the game,” head coach Tim Corbin said. “He was very effective with his off-speed pitches, as well as his fastball. The attack was quick, and he had good pace. He’s a good, good competitor, so it was good to see him finish that game.

Vanderbilt gave future opponents a frightening glimpse of their offensive talent in their series with Illinois-Chicago, but their pitching was truly what carried them to wins on Saturday and Sunday.

The VandyBoys will continue their non-conference schedule against the Memphis Tigers on Tuesday at Hawkins Field.