A six-run third inning and dominant pitching propelled the Commodores past Illinois-Chicago in the series opener. 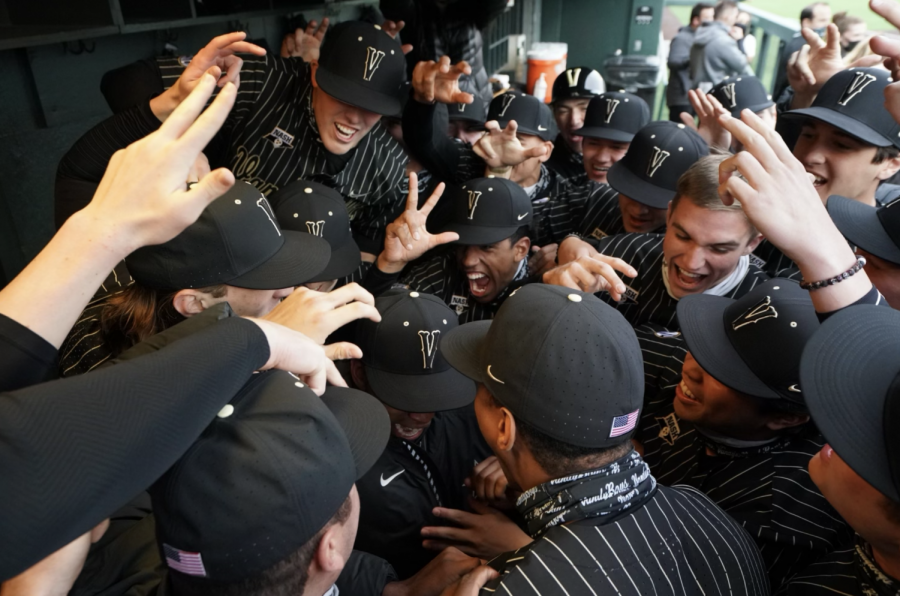 The VandyBoys celebrate in the dugout in their 15-0 victory over Illinois-Chicago on March 5. (Hustler Multimedia/Truman McDaniel)

Vanderbilt welcomed the University of Illinois-Chicago Flames to Hawkins Field with a complete 15-0 destruction in the first of a three-game series on Friday afternoon.

Chilly weather kept the bats cold for the Flames and Commodores until the third inning when the VandyBoys exploded to a 6-0 lead with five hits, two walks and an assist from a wild pitch.

“The guys played with a lot of maturity tonight,” Coach Tim Corbin said after the game. “Playing time is very hard to come by, and the young players showed their appreciation of every opportunity.”

Sophomore Thomas Schultz started on the bump for the Commodores and struck out two in the first inning, but needed 23 pitches to retire the side. He struggled to get out of the second inning as well, needing another 23 pitches. From there, he was able to settle down and find his spots, baiting Flames hitters into chasing breaking balls or forcing them to hit into double plays. He finished the day with eight strikeouts, no walks and only one hit after 88 pitches through five innings.

“I was really trying to shape my slider and focus on the offspeed. I worked on that in the bullpen but I found it this week, especially in the 0-2 count,” Schultz said of his performance after the game. “It feels good [to only give up one hit], but I have to give credit to those guys behind me. I couldn’t have done it without them.”

Vanderbilt got a big spark with senior left fielder Cooper Davis returning to the lineup. Davis, who took a foul ball to the face in the first game of the season, wore a cage on his batting helmet.

“It’s great to have Coop back in the lineup,” Corbin said. “He brings us great energy.”

Davis finished the game with an RBI and two walks.

The VandyBoys had a chance at an early lead in the bottom of the first but left the bases loaded after a double play and pop out.

In the bottom of the second, Enrique Bradfield Jr. got on base with an infield hit before stealing second and third base. Davis then walked and stole second himself, but Vanderbilt was again unable to scratch any runs across.

Vanderbilt struck first in the bottom of the third as Isaiah Thomas lined one down the third base line to bring in Dominic Keegan. Two more scored after Maxwell Romero Jr. cleared the bases with a double. Bradfield Jr. and Davis each added RBI singles before Carter Young notched another for the Commodores with a sacrifice fly, bringing the total to six runs for the inning.

The Commodores continued to build their lead with a two-run single from Young in the fifth.

Schultz was replaced by Chris McElvain to begin the sixth inning. McElvain walked the first batter he faced, but the Commodores turned a double play to keep the score at 8-0.

The Commodores seemed to benefit from the seventh inning stretch, as they stretched their lead to 10 thanks to two solo home runs. First, Young blasted a fastball to deep right field, and then Keegan launched the very next pitch out of the park.

In the eighth, Vanderbilt added five more runs off the bats of three freshmen. Calvin Hewett and Troy Laneve each scored two with doubles into right field before Gavin Casas drove in another.

The Commodore pitchers were dominant all game with the combination of Schultz, McElvain, Miles Garrett, Grayson Moore and Patrick Reilly pitching a two-hit shutout and striking out 12 Illinois-Chicago batters.

The VandyBoys return to action Saturday, March 5 against Illinois-Chicago at 2:00 p.m CST.