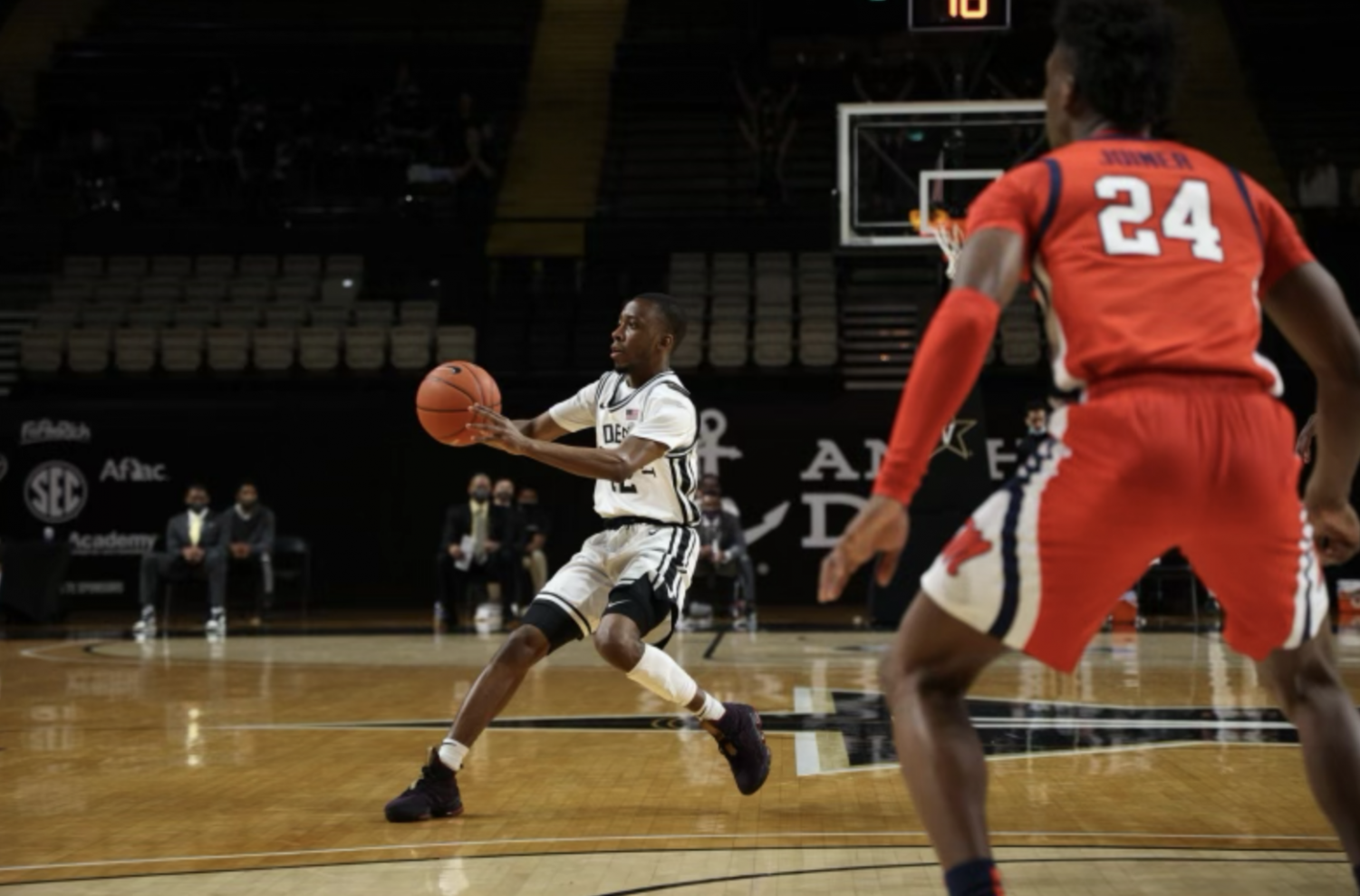 With its top two scorers, Scotty Pippen Jr. and Dylan Disu, sidelined with injuries, Vanderbilt was able to pull off a 75-70 upset over Ole Miss sandwiched between a hard-fought loss to Tennessee and a blowout loss at LSU.

Vanderbilt will be without Scotty Pippen Jr, Dylan Disu and Clevon Brown against the No. 25 Tennesse Volunteers.

The news officially broke about 40 minutes before tipoff in the rivalry game. Then, shortly after the game concluded, Jerry Stackhouse revealed that Disu would be having knee surgery on that Friday and that his season was over.

And then Pippen Jr., who is expected to return at some point this season, missed the Tennessee game and next two games as well with a bruised hip.

So three games without Pippen Jr. and Disu is three-straight blowout losses, right? Surely, the Commodores, who have struggled all season to get players besides the star duo to step up, can’t sustain the loss of the two players who at the time accounted for 48% of their total scoring right?

Sure, that did turn out to be what happened against LSU on Tuesday, as the Commodores put on a particularly ugly performance in the final contest of the three-game stretch. But it was far from the case in the first two games.

First, Vanderbilt played the NCAA tournament-bound Volunteers extremely close, trailing by just four at the final media timeout before ultimately coming up short. Then, in a display of toughness, heart and player development, the Commodores came away with an impressive 75-70 victory over the red-hot Ole Miss Rebels on Senior Day.

The win against the Rebels, during which five different Commodores scored in double figures, was a signal of the potential of the program under Stackhouse.

Any time there are injuries on a team, other players get a chance to step up. This was certainly the case for the Commodores without their two stars. While several different Commodores were impressive and made significant contributions, two freshmen especially stood out: Issac McBride and Trey Thomas.

With Pippen Jr. out, much of the primary ball handling duties fell on the backs of the two of them. Both players had some flashy moments in various points of the season, but both also played  inconsistent minutes and were unable to carve out clear roles for themselves.

Their performances in the last three games, however, proved just how valuable the freshmen duo will be both for the remainder of this season and over the next few years.

Despite their similar size and position, the two guards both bring different skillsets to the table. McBride has a silky-smooth jumper and an ability to effortlessly drive to the basket. Thomas, standing at just 5-foot-11, is tough as nails and is more than capable of getting a shot off over taller defenders.

And both can really shoot the three-ball.

In the two games against Tennessee and Ole Miss, Thomas and McBride averaged 14 and 12 points, respectively, while combining to make 14 of their 25 attempted threes.

The two also combined for just five turnovers over the past three games, as they showcased their abilities to effectively run the offense and not get rattled as main ball handlers.

Both guys made huge baskets at key times in the Ole Miss victory, never letting the moment get the best of them despite their inexperience.

Of course, there’s room for improvement. McBride recorded a total of two assists during the three games. Thomas wasn’t much better with just five. Their shot selection can sometimes be frustrating and neither are great defenders, though both have improved tremendously on that end of the floor.

Commodore fans and coaches alike should be thrilled with the potential that both McBride and Thomas have shown throughout the season. The two of them, alongside fellow freshmen Myles Stute, Tyrin Lawrence and Akeem Odusipe, make up a nucleus that maybe, just maybe, will be the key to getting the program back on track.

“They got a chance to be a really special group here in a few years if this group gets to stick together,” Stackhouse said. “Hopefully we’re one of those teams that gets to grow old together.”

Finding a way to win

The last Memorial Minutes column was appropriately titled “Learning how to win”. Vanderbilt has been competitive in the vast majority of its games this season, especially in the last month, and most of the time the Commodores have a chance to win at the end. The big plays, however, never seem to go their way.

Against Tennessee, it was the same story. The shorthanded Commodores went into the final media timeout down just four after mounting a big comeback. Max Evans had just thrown down a thunderous and-one dunk over Yves Pons, bringing all the momentum to the Vanderbilt sideline during the timeout.

Instead of playing off of that momentum, however, Vanderbilt came out extremely flat in the final 3:49. Jordan Wright missed the front-end of a one-and-one, Keon Johnson got loose for a huge dunk for the Volunteers and then the Commodores turned it over on three consecutive possessions.

An impressive feat considering the Commodores were facing a top-25 team without three starters, but, nonetheless, it was another game where they couldn’t make the big plays to win.

It gets exhausting watching from afar; I can’t even imagine how it feels as a member of that locker room.

But as frustrating as the continuous close losses are, there’s a hidden beauty in them. Because when a team, especially a young team, goes through those situations as many times as this team has, they learn valuable lesson after valuable lesson. And, ultimately, they learn how to win.

And that’s exactly what happened on Senior Day when Vanderbilt pulled off the improbable upset over Ole Miss.

At the 6:56 mark in that game, McBride buried a three and put Vanderbilt ahead 63-53. Time to mark this one down as a win? Not if you’ve watched any Vanderbilt basketball over the last four years.

At the 1:52 mark, McBride connected on yet another deep-ball, again putting the Commodores ahead by ten points, this time by a score of 72-62. Still not time to start celebrating? Nope.

Fast forward 74 seconds and the Rebels have made it a 72-70 game. Sounds about right. Here it comes again—another close game that is going to slip through Vanderbilt’s hands.

Well, not this time.

This time the Commodores earned their third SEC win of the season and their first in a close game setting.

After Devontae Shuler canned the three-ball that made it a two-point game, Ole Miss immediately fouled Clevon Brown, sending the fifth-year senior to the charity stripe on Senior Day.

Brown, a career 48% free throw shooter, stepped up to line and made one of two, keeping Ole Miss alive. The Rebels brought the ball up the court, and Vanderbilt played nearly perfect defense, forcing them into two tough, contested three-pointers before Brown ultimately grabbed the board and was fouled again. This time, the senior made both free throws.

It wasn’t pretty but Vanderbilt found a way to win. Stackhouse put it best after the game:

It’s just one win. There needs to be a lot more in the future. But, it’s refreshing and encouraging to see all those close losses finally culminate in a big-time victory.

To win an SEC game without your top two players, two players who are arguably both top-15 players in the conference, is extremely impressive.

To win that game against a team that had won five of its six games (with three of those wins coming against ranked opponents), a team that absolutely needed to win that game to keep its NCAA tournament hopes alive, is even more impressive.

That’s why, in my opinion, this is unquestionably the best win of Stackhouse’s short time as Vanderbilt’s head coach.

To beat a bubble team despite an enormous talent gap on the floor is incredible, and Stackhouse deserves big props.

Stackhouse has faced a decent amount of criticism this season (and much of it has been valid), but this win shows the potential that the program has under him.

He puts his players in the best positions possible for them to succeed and instills a great deal of confidence in them even through all of the tough losses. Thomas and McBride definitely did not look like freshman point guards out there against Ole Miss. DJ Harvey, who’s had a really rough season, goes out and makes multiple big shots early in the game. Jordan Wright did a little bit of everything like he always does. And Max Evans has grown leaps and bounds as a scorer throughout his two years under Stackhouse.

“When you don’t have success, it could be easy to be like ‘man it’s just not working’ but our guys don’t have that attitude,” Stackhouse said after the Ole Miss victory. “They look me in the eye, they believe me. And they trust that if they keep doing what [we tell them] to do, then we’re gonna have some success and I think that today was a good sign of that.”

On Saturday, Stackhouse showcased his ability to do more with less and, in doing so, delivered his strongest statement yet of why he’s the right man for this job.

Sure, there are still major questions surrounding recruiting. Many of his lineup decisions remain puzzling at best. Why did walk-on Isaiah Rice start against LSU? Why did McBride, who’s far and away the team’s best pure scorer with Pippen Jr. and Disu sidelined, only play 16 minutes in the Tennessee loss?

But, Stackhouse has his guys truly believing that they can win every game they play, no matter how big the talent deficit is. And the massive leaps in production that players have shown under him is a testament to his ability to develop players even in trying circumstances.

The Commodores had absolutely no business winning the game against Ole Miss without Disu and Pippen Jr., but they did.

Vanderbilt fans, give Stackhouse his credit for this one and look forward to what he has to offer the program in the next few years.