Monstrous performances from Maxwell Romero Jr. and Dominic Keegan, who logged seven and six RBIs, respectively, put an exclamation point on the series. 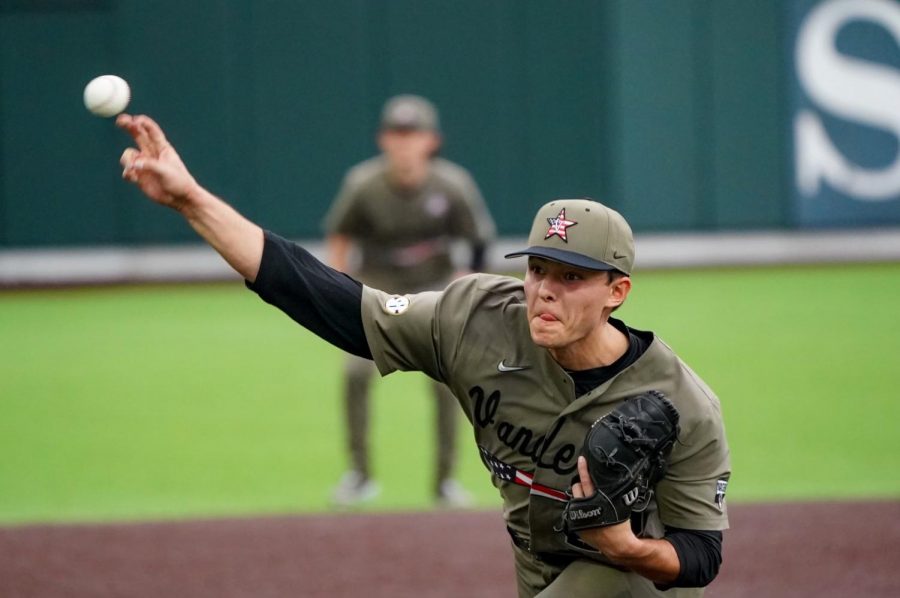 Jack Leiter gets the start and records a win over Georgia State on Feb. 28. (Hustler Multimedia/Truman McDaniel)

Not a bad Sunday for the VandyBoys.

What started with an emphatic, 12-2 victory over Georgia State in the first leg of a doubleheader concluded with another huge win—this one, by a final score of 17-6—improving the Commodores’ record to 6-1 on the season.

“We left a lot of money on the table,” head coach Tim Corbin said after his team’s outpour led to a season-best 17 runs. “Pretty good response to [Friday’s loss] by taking the last three games [of the series.]”

Vanderbilt’s performance Sunday afternoon was in large part thanks to the dominant pitching of sophomore pitcher Jack Leiter, who shined in his second start of the season. It may have taken Leiter 93 pitches to get through five innings, but he still dominated the Panthers’ lineup and finished with seven strikeouts and no earned runs, allowing just three hits and four walks.

Though Leiter continued his hot start to the 2021 season, during which he has logged 15 strikeouts, four walks, four hits and zero earned runs in ten innings pitched, he was far from the story of the day. Instead, it was junior first baseman Dominic Keegan and sophomore catcher Maxwell Romero Jr. who stole the show.

“I thought we made some pretty good contact with two strikes,” Corbin said. “The two doubles early, then of course, Dominic [Keegan] and Max [Romero] going to the middle of the field with two strikes. That was pretty good. Max obviously had a pretty good day. But offensively, we’ve got a long way to go before we can think about scoring runs off the pitching that we’re going to see moving forward.”

Keegan’s week started with a double and a home run against Western Kentucky on Wednesday, then a home run against Georgia State on Saturday. He entered Sunday’s doubleheader with a team-best seven RBIs and a .600 batting average, and he showed no signs of slowing down.

After Carter Young got things started for Vanderbilt with an RBI double in the bottom of the third, Keegan one-upped his teammate with a two-RBI double, giving the VandyBoys a 3-0 lead after three frames.

Next, in the fourth inning, Romero Jr.—starting in place of CJ Rodriguez, who was given a game of rest after playing the doubleheader’s first leg—launched a solo home run, good for his first collegiate hit and a 4-0 lead. But as has been the case all week, when a handful of walks loaded the bases later in the fourth, Keegan just couldn’t be denied some action in the rally: he launched a grand slam to straightaway center field, extending Vanderbilt’s lead to 8-0. Keegan finished the day with two hits, a walk and six RBIs, and he was eventually replaced by freshman Gavin Casas.

The VandyBoys were held scoreless in the fifth. But rest assured, their day was not over.

In the sixth inning, when freshman Nelson Berkwich made his collegiate debut in relief of Leiter, allowing one earned run off a single, Vanderbilt responded to the tune of four runs—three of them courtesy of Romero Jr., whose second-career hit was a base-clearing double with three men on. Then, senior third baseman Jayson Gonzalez was hit by a pitch with the bases loaded, plating one more and growing the lead to 12-1.

17-year-old freshman Christian Little made his second-career appearance in the seventh, ending Berkwich’s day after one earned run in one inning, and he ran into some trouble of his own: he allowed two solo home runs on the inning, but Vanderbilt again gave its pitchers some extra confidence in the bottom of the frame. And guess who?

Max Hogan drove in one on a fielder’s choice, then Romero—again—logged his third career hit, his second career home run, and drove in three more runs. After entering the game without a hit, Romero left with three of them, two being home runs, and a whopping seven RBIs. The Commodore lead had grown to 16-3 after seven frames.

Senior lefty Hugh Fisher, in his second appearance since undergoing Tommy John surgery, came in to relieve Little in the eighth and recorded the game’s only one, two, three inning, to which Vanderbilt responded with one more run courtesy of C.J. Pittaro, a freshman pinch hitter, who tapped an RBI groundout and extended the lead to 17-3.

Though Fisher had no trouble in the eighth, he struggled a bit in the ninth, perhaps due to the pouring ran that started on a whim. After loading the bases, Fisher surrendered a pair of singles and a walk, cutting the lead to 17-6, the final score.

While the VandyBoys may sit at 6-1, outscoring opponents 62-19, Corbin seems far from complacent.

“We’re young,” Corbin said, when asked what he’s learned of his team through two weeks of play. “We’re just inexperienced, and we’ve got a long way to go.”

The VandyBoys will take a few days off before returning to Hawkins Field on March 5 for a three-game series against Illinois-Chicago.