Vanderbilt soccer put in a strong performance against DePaul, on the back of three first-half goals and a great defensive showing. 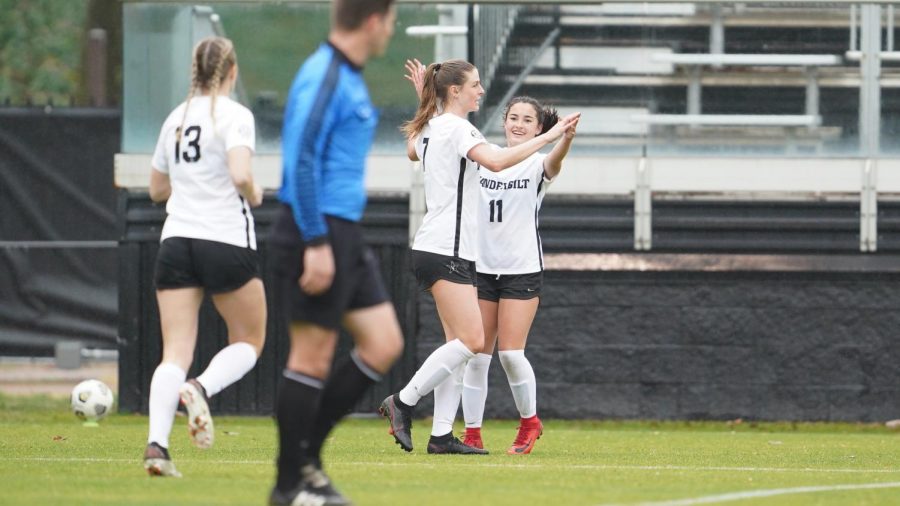 Vanderbilt soccer won the second game of their spring season on Saturday versus DePaul, with a final score of 3-0. Coming off of a 4-0 win at Middle Tennessee State in their opener on February 22nd, the Commodores continued their strong play to start the spring season. The Commodores scored three goals in the first half, two from star forward Haley Hopkins and one from Raegan Kelley, and retained control of the game throughout the second half.

The action started early for the Commodores, with Marin Boyle putting a shot on net in the first minute of the game. Vanderbilt dominated possession in the opening minutes and created chances in the attacking third. Three offsides calls on Vanderbilt within the first eight minutes slowed Vanderbilt’s attack, but pressure was certainly being applied on DePaul’s back line.

“We’re a team who likes to possess the ball and I think we were able to handle the pressure DePaul put us under in the first half,” Vanderbilt head coach Darren Ambrose said of his team’s play. “We looked extremely comfortable moving the ball which allowed us to break their pressure.”

DePaul responded with attacking movements into the Vanderbilt half, but the Commodores’ back line handled it with apparent ease.Vanderbilt continued to apply pressure and broke through in the 14th minute with a goal by Haley Hopkins to go up 1-0. Hopkins won possession in the box between three DePaul defenders and scored with a clinical finish to give the Commodores the lead early.

“Put her in key moments where she’s under a lot of pressure and her composure and focus are unique,” Ambrose said of Hopkins after her two-goal performance. “Her mentality is unlike anyone else.”

Following Hopkins’ goal, the game began to open up for the Commodores. Just four minutes later, in the 18th minute, Hopkins found Kelley with a beautiful through pass behind the DePaul defense. Hopkins won possession in the middle of the attacking third and slid a pass past two DePaul defenders to Kelley, who buried the ball into the bottom left corner. Kelley’s score put the Commodores up 2-0 within the first twenty minutes.

After a few Vanderbilt starters subbed out, including goalkeeper Sarah Fuller, the Commodores extended their lead to 3-0 in the 29th minute after Ashtyn Fink found Hopkins for her second goal of the game, giving Vanderbilt control of the match in the first half. DePaul looked to answer with attacks of their own, mainly targeting forward Morgan Turner, but the Vanderbilt defense held strong and the Commodores went into halftime with a 3-0 lead.

As the sides returned from the locker room, DePaul looked to apply pressure on the Vanderbilt back line. Within the first five minutes, attacking plays were orchestrated by DePaul forwards Morgan Turner and Kristin Boos, but the Commodore defense was able to hold strong. DePaul mounted two strong attacks at the 55th minute, resulting in three consecutive corner kicks. The last of these resulted in a header on goal by Bina Saipi, which was held on to by Vanderbilt’s substitute keeper Kate Devine.

DePaul continued to push players forward as the second half progressed and registered another shot on goal in the 64th minute. Forward Kristin Boos was skillfully able to win possession at the top of the box, but her ensuing shot attempt to the bottom left corner was dealt with by the Vanderbilt keeper. Two minutes later, in the 66th minute, Boos won possession again in the box but was dispossessed with a great tackle by Vanderbilt midfielder Alea Hyatt.

Vanderbilt began to attack more aggressively as the half went on, with two successive crosses into the box by Madison Elwell around the 72nd minute. A following attack resulted in Haley Hopkins being found by Tina Bruni in the box, but a great save was made by DePaul keeper Mollie Eriksson on Hopkins’ shot attempt to the bottom left corner.

In the 79th minute, following a miscommunication by Vanderbilt’s back line, DePaul midfielder Bina Saipi won possession and put a powerful shot on net from roughly 10 yards out. Vanderbilt’s third substitute keeper Sophie Guilmette made an acrobatic save to keep the clean sheet for the Commodores.

Vanderbilt continued to apply pressure into the late stages of the game, with two successive crosses coming from Alea Hyatt and Amber Nguyen in the 87th minute. Both did not find their targets in the box and were handled well by DePaul keeper Mollie Eriksson. Those plays concluded the action for the afternoon, and the match ended with a final score of Vanderbilt 3-0 over Depaul.

“We played reasonably well… but the second half showed how far we have to go to be the team we are capable of being. We did not take a game we were dominant in and keep our foot on the gas… we lost a bit of our focus and became a bit sluggish. We know this and will finish better moving forward.”

Vanderbilt, now 2-0 in the spring,  will look to build on their early-spring momentum next weekend. The Commodores will face their biggest test to-date on March 7, as they welcome Racing Louisville FC, a professional club in the NWSL, to Nashville for an exhibition.