After losing to Georgia State on Friday, the VandyBoys rebounded on Saturday with a 5-4 victory. 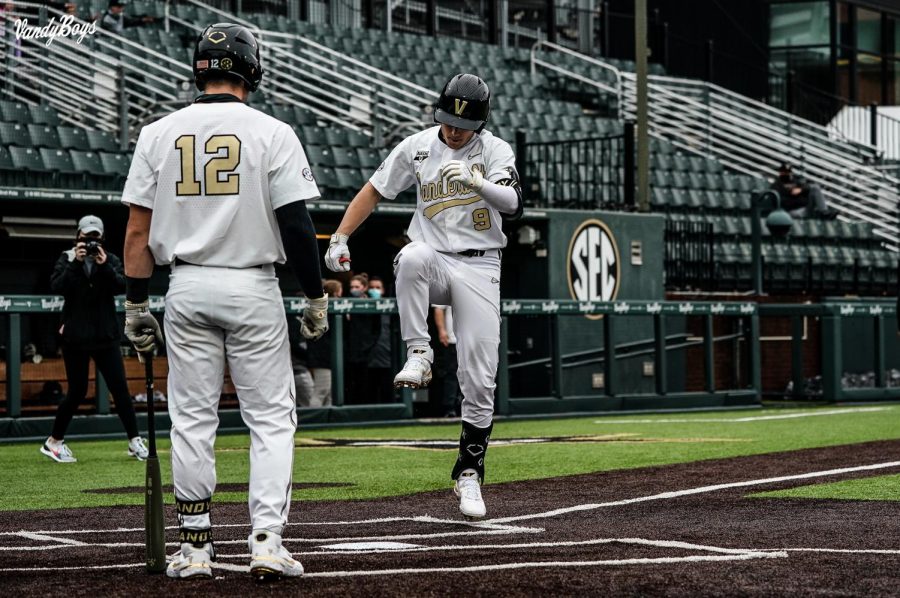 Following its first loss of the season on Friday, Vanderbilt baseball hosted Georgia State again on Saturday afternoon. Led by a solid, seven-strikeout outing from sophomore pitcher Sam Hliboki and home runs from junior first baseman Dominic Keegan and sophomore shortstop Carter Young, the VandyBoys ultimately got back in the win column with a 5-4 victory.

“I thought we responded right away, immediately, to start the game,” head coach Tim Corbin said after the win. “I thought we swung the bat a little bit better as the day went on in the sixth, seventh and eighth. We got some more barrels, so that was encouraging. But it was tough baseball.”

The Commodores got off to a hot start at Hawkins Field, as Hliboki worked his way through the first with ease, and Keegan launched his two-run shot in the bottom of the frame.

“He certainly has some offensive ability, and he’s got some strength in his bat, too,” Corbin said of Keegan. “He’s versatile in the order. He can play the short game, and he can hit the ball to both gaps.

Vanderbilt never looked back after jumping out to an early, 2-0 lead, and they padded the margin in the bottom of the second. After CJ Rodriguez and Tate Kolwyck drew walks, Enrique Bradfield Jr. hit a single to load up the bases with no outs. Two of the next three Vanderbilt bats, senior third baseman Jayson Gonzalez and Young, drove in a run apiece with sacrifice flies, increasing the VandyBoys’ lead to 4-0.

Hliboki had his first couple of setbacks of the game in the third and fourth innings. In the third, following two straight strikeouts, Hliboki allowed a solo home run over the right field fence to Georgia State’s second baseman DeAngelo Abboud, which cut Vanderbilt’s lead to 4-1. It ended up being Hliboki’s only earned run of the outing, though that didn’t always look to be the case: in the top of the fourth, Hliboki loaded up the bases with one out, but back-to-back strikeouts got Hliboki out of the jam. His 68-pitch outing had come to a close following his strong work in the fourth, as he finished with seven strikeouts and no walks, allowing one earned run off four hits.

“Sam [Hliboki] did a heck of a job getting out of that fourth inning,” Corbin said. “That was a touchy situation, especially when he went 2-0 on Pierce and had to come all the way back and land a breaking ball, too.”

Sophomore Chris McElvain relieved Hliboki in the top of the fifth, working through the fifth and sixth without allowing a run. However, McElvain faced some trouble in the seventh: a bunt attempt—and a subsequent errant throw to first from Gonzalez—brought one more Panther baserunner home. The bunt was ruled a single despite the off-target throw, so McElvain was charged with an earned run. Later that inning, Georgia State laid down another bunt attempt, which McElvain proceeded to bobble, driving in another run. After McElvain found his way into a jam and the lead had narrowed to just one run, Tim Corbin tapped freshman reliever Miles Garrett to work his way out of the inning. Garrett allowed one more Panther baserunner to score off a sacrifice groundout, so Vanderbilt and Georgia State went to the bottom of the seventh tied at four.

Vanderbilt had lost its lead—for a mere few minutes. In the bottom of the seventh inning, a much-needed solo home run from Young gave Vanderbilt another lead, albeit a narrow one. The VandyBoys’ 5-4 lead ended up sticking for the duration of the contest, as junior Luke Murphy took the mound in the top of the eighth and converted on a two-inning save, continuing his hot streak to start the season.

“He got a quick first inning, so we wanted to keep him rolling,” Corbin said of his decision to let Luke Murphy go for a two-inning save. “The thing that he does is he charges the glove. He gets the ball to the glove. I think if they beat him, they’re going to have to earn their way on. … I thought he was the right guy at the right time.”

The VandyBoys (4-1) will face Georgia State two more times tomorrow, in a doubleheader that starts at 12:00 p.m. CST.