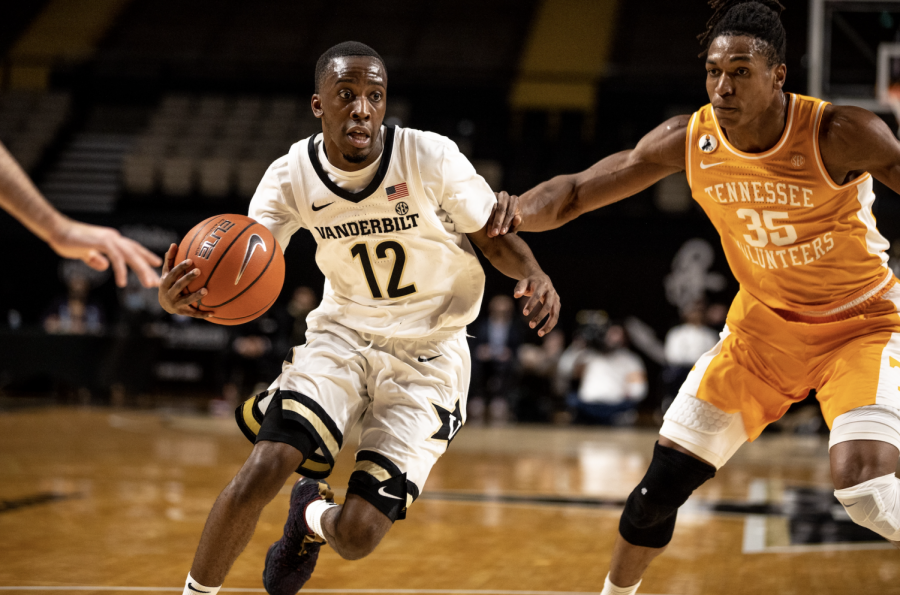 Trey Thomas drives to the basket against Tennessee on Feb. 24. (Hustler Multimedia/Hunter Long)

In a game in which they were missing three key starters, the Vanderbilt Commodores fell 70-58 to the No. 25 Tennessee Volunteers.

“The guys that played—they competed,” Coach Jerry Stackhouse said after the game. “We were a little under-manned [and] had some lineups out there that we hadn’t really used much this year, but I thought those guys played their butts off and gave themselves a chance to make a play or two at the end.”

Scotty Pippen Jr. (23.6 PPG, 5.2 APG), Dylan Disu (15 PPG, 9.2 RPG) and Clevon Brown (3.5 PPG, 2.6 RPG) were all unable to suit up for the game due to injuries. As a result, Stackhouse inserted Issac McBride, Braelee Albert and Quentin Millora-Brown into the starting lineup alongside usual starters Max Evans and Jordan Wright. That starting unit averaged a combined 23.6 points per game entering the contest.

After the game, Stackhouse revealed that Disu would be having season-ending knee surgery on Friday to clean up some meniscus-related damage.

Pippen Jr., who has been dealing with a hip flexor, will be further evaluated tomorrow when he gets an MRI.

Vanderbilt hung tough early in the contest, jumping out to a 9-7 lead at the first media timeout. The halfcourt offense struggled to generate clean looks, but the Commodore defense was effective in forcing the Volunteers into some low-percentage shots, leading to a couple of easy baskets in transition.

Coming out of the media timeout, Tennessee immediately went on a 10-0 run keyed by a pair of three-pointers by Victor Bailey Jr. It appeared as if that might be the point where the Volunteers took off and dominated the severely undermanned Commodores, but Vanderbilt stuck around.

The Commodores went on an 11-0 run of their own to retake the lead 20-17. Trey Thomas was the key during this spurt as the 5-foot-11 freshman came off the bench to knock down three triples, the last of which came over the outstretched hands of 6-foot-10 Drew Pember as the shot clock was dwindling.

Vanderbilt was unable to sustain its momentum, however, as the Commodores were outscored 15-2 to end the half and the Volunteers went into the locker room with a 32-22 lead. The Commodores turned it over 4 times in that span and made just 1 of their final 9 field goal attempts.

Both teams struggled with turnovers and three-point shooting in the first half. Vanderbilt turned the ball over 11 times and shot 29% from deep, while Tennessee had 10 turnovers and shot just 23% from downtown. The difference in the half came in the paint where the Commodores were outscored 16-6.

The Commodores started to heat up on offense in the opening ten minutes of the second half, knocking down five early triples, three of which came from Evans. Unfortunately for Vanderbilt, however, Tennessee also got into more of an offensive rhythm as Bailey Jr. scored ten quick points. Despite the improved offensive play, Vanderbilt still trailed 50-39 at the ten-minute mark.

McBride, who didn’t start the second half, got the Commodores within 52-45 at the under-eight media timeout after draining two tough three-pointers in a row. A couple of possessions later, McBride got a tough floater in the middle of the lane to go and Thomas followed that up with a deep three to bring the game to 56-50. Evans added to the run when he flushed home a one-handed jam while getting fouled by Yves Pon, but he was unable to convert at the line for the three-point play. The final media timeout came with the Commodores trailing by just four points, 56-52.

Tennessee scored the next four points, however, including a vicious dunk by Keon Johnson and Vanderbilt could never get within anything less than six points for the rest of the game.

“We had enough,” Stackhouse said. “We showed it; we made some plays here and there. We had enough guys in the locker room to get it done.”

Thomas led the Commodores with 14 points, and Evans and McBride added 13 and 11, respectively. Bailey Jr. finished with 21 points for Tennessee, while Jaden Springer went for 20.

“[That was a] real hard game we played,” Evans said. “[I’m] proud of all the guys for stepping up. From the bench to the starters, everyone had a bigger role to play with some of the guys out. I’m just proud of the way we fought this game.”