Vanderbilt certainly looked the part of a top-25 team on Wednesday, as the Commodores handled Central Michigan at home. 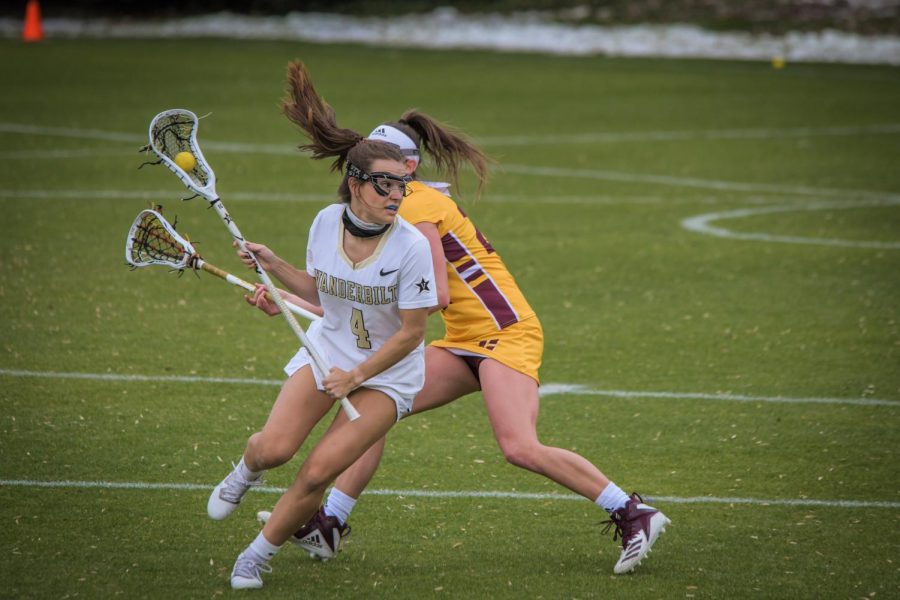 Griffin Gearhardt cuts to the cage against Central Michigan. (Twitter/@VandyLacrosse)

Following an upset victory over No. 24 Colorado this past Sunday, Vanderbilt Commodores—now ranked No. 25 in the country—built on their success, as they handed the Central Michigan Chippewas their first loss of the season. The Commodores won their first outdoor home competition 16-10, paced by five goals from Elizabeth Scarrone, three from Maddie Souza and three from Mikela McCauley.

This battle started off with the Commodores breezing to a 5-0 lead within the first 12 minutes of the game. The convincing start was led by senior attacker Gabby Fornia scoring the first goal of the game within three minutes. Fornia’s senior counterpart, Scarrone, added 2 goals shortly thereafter, only for the sophomore midfielder from Texas, Mikela McCauley, to add on two more goals. The Commodores at first looked too powerful for the unranked Chippewas. But just when it looked like nothing could save the Chippewas, a timeout by Central Michigan’s coach Sara Tisdale provided a momentum shift the Chippewas desperately needed.

This timeout provided a spark for Central Michigan to crawl back into the game. A game that looked to be a demoralizing dent on Central Michigan turned into a competitive game. Vanderbilt’s early five-score lead wasn’t recaptured until the very end, as Vanderbilt found itself in a tie game early in the second half. The resilience of Central Michigan was seen through the excellent defensive stops that kept Vanderbilt scoreless for the final 16 minutes of the first half.

Following the lethargic end to the first half, Vanderbilt’s offense rekindled its aggressive mentality in the second. Central Michigan tied the game at six early in the half, but Scarrone responded with her third goal of the game, giving Vanderbilt a narrow 7-6 lead. For the next ten minutes, the teams exchanged punches, tying at seven, eight and nine goals apiece, before the Commodores finally begun to pull away with 15 minutes left in the game.

Vanderbilt jumped out to a 10-9 lead and never looked back. The Commodore defense, led by standout goalie Paige Gunning, helped Vanderbilt maintain its power and regain the lead as the game closed. In the last fifteen minutes, Vanderbilt displayed composure, finishing the game on a dominant 6-1 run.

The Commodores’ 16-10 win moves their record to 2-1, providing some much-needed momentum for their next matchup: a Sunday morning tilt with North Carolina, the No. 1 team in the nation. For the Commodores to win, they must keep their foot on the gas and maintain the same energy they brought at the start and end of the game against Central Michigan.