The Commodores will play host to the rival Volunteers for the second game of the annual series. 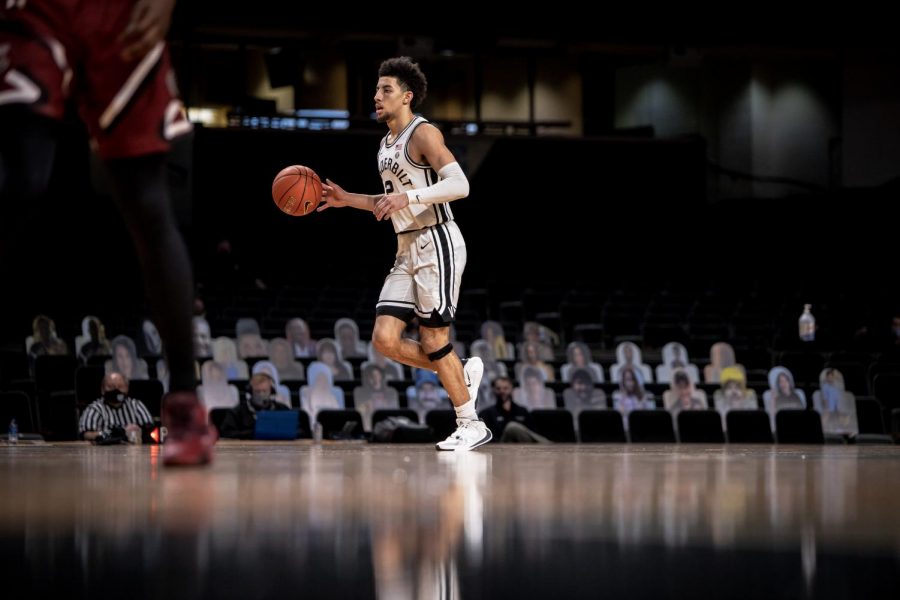 The rival Tennessee Volunteers will make the in-state trek Wednesday to battle the Vanderbilt Commodores at 8 p.m. CST at Memorial Gymnasium. Vanderbilt comes into the contest at 6-12 (2-10) on its 2020-21 campaign, while the Volunteers sport a 15-6 (8-6) mark.

This will be the second of two scheduled matchups between the Commodores and Volunteers;  the first, an 81-61 loss in Knoxville for Jerry Stackhouse and crew, took place on Jan. 16. This matchup was originally scheduled on Jan. 12 but was postponed due to COVID-19 issues within the Vanderbilt program. Tennessee has won seven straight contests over Vanderbilt, who has not beat the Volunteers since Feb. 2017.

Both teams enter Wednesday night’s tilt having won just one of their last three games. For Vanderbilt, it was a statement win at Mississippi State followed by two extremely close losses to Kentucky and Alabama. For Tennessee, on the other hand, it has been two 13-plus point losses sandwiching a 20-point win over South Carolina.

Along those lines, consistency has been a central issue for the Volunteers throughout SEC play. Coach Rick Barnes’ squad hasn’t been able to string together three consecutive wins since Jan. 6 through the Jan. 21. That’s puzzling for a squad that was ranked as high as 7th in the country at one point and was a popular preseason pick for regular season Southeastern Conference (SEC) Champions.

As has become the norm in Knoxville, the Volunteers feature one of the best defenses in the country (fifth in KenPom defensive efficiency). The reason behind the group’s inconsistency, however, has been on the other end of the court, where the Volunteer’s rate 73rd in offensive efficiency, per KenPom. That Tennessee offense has been particularly tepid in losses this season: the Volunteers are averaging just 57 points per game in their six losses. The Volunteers shot just 32 percent from the field in their last loss, a 15-point drubbing in Knoxville at the hands of the Kentucky Wildcats.

Unlike its in-state rival, Vanderbilt has not distinguished itself on the defensive end of the floor this season. However the effort and scheme on that end of the floor has certainly improved lately, most notably in the Commodores 20-point win over Mississippi State in which they held the Bulldogs to 51 points on their home floor. A major piece in that improvement has been the resurgence of senior center Clevon Brown. Brown was a thorn in the side of Mississippi State all afternoon tallying a number of blocks and effectively trapping the Bulldog guards to create turnovers. However, as has been the case much of the past two seasons, Brown has struggled to stay on the floor since then, suffering an injury against Kentucky that limited him in that contest and held him out of the matchup with Alabama.

Stackhouse seemingly indicated that Brown will be a game time decision during this week’s press conference.

Stackhouse: “We’ve got some guys banged up, so we’re taking it easy with those guys.”

He says he isn’t sure who will be available for tomorrow’s contest, and it will likely be a game-time decision. He hopes to get some answers to that in practice today. pic.twitter.com/KbvuMnDjfq

Brown’s availability is always critical to the Commodores success, however it may be even more so against a Volunteer team that has given Stackhouse as much trouble as any SEC opponent  over the last two years. Brown’s rim protection and ability to give Vanderbilt another option on offense would be a massive boost for the Commodores.

Finding that additional option on offense will be key for Vanderbilt, who had just four players score above three points in its last contest in Knoxville (Dylan Disu-19, Scotty Pippen Jr.-18, Jordan Wright-9 and DJ Harvey 9). Since then, Brown and fellow senior Max Evans have pitched in on the offensive end at times; however, the Commodores get into trouble when the trio of Disu, Pippen and Wright aren’t getting much help. Evans in particular has scored 20 or more points in both of Vanderbilt’s SEC wins this season, and will be an X-factor for the Commodores as always.

While asking Evans to ignite the Vanderbilt offense may be easier said than done against a Tennessee team that gives up just 62.7 points per game, other teams have found cracks in the Volunteer defense this year. Case in point: Tennessee has been outrebounded in four of their six losses this season. If Brown plays and pairs with reigning SEC player of the week Dylan Disu (9.2 RPG), this actually may be a point of strength for the Commodores, who held their own on the glass last time out against Tennessee and have found success in SEC play when they rebound well.

Defensively, the Commodores will need to try to limit the freshman backcourt duo of Jaden Springer and Keon Johnson. Springer in particular has been emblematic of Tennessee’s offensive struggles—last week, he scored 16 points in a win over South Carolina then followed it up with a 2-point clunker against Kentucky. To begin the month of February, he scored 2 points in a loss against Ole Miss, followed by a 23 and 30 point performance in back-to-back wins.

In terms of the big picture, Vanderbilt will be looking to right the ship after seemingly turning a corner in their win against Mississippi State, only to lose their next two games by four points each over the last week. Tennessee, on the other hand, has been free falling in bracket predictions, and is now a projected 6 seed, according to ESPN’s Joe Lunardi. For Stackhouse and Vanderbilt, getting a chance to further dent the Volunteers’ resume has to be exciting, especially given the trouble Rick Barnes has given Stackhouse over the last two years. If the Commodores can get some help offensively from their seniors against the Volunteers stout defense, control the glass on both ends and limit Tennessee’s athletic freshmen, they may just have a chance to pull off the upset.