Vanderbilt baseball cruised to a 14-1 victory in the first game of their doubleheader with Wright State. 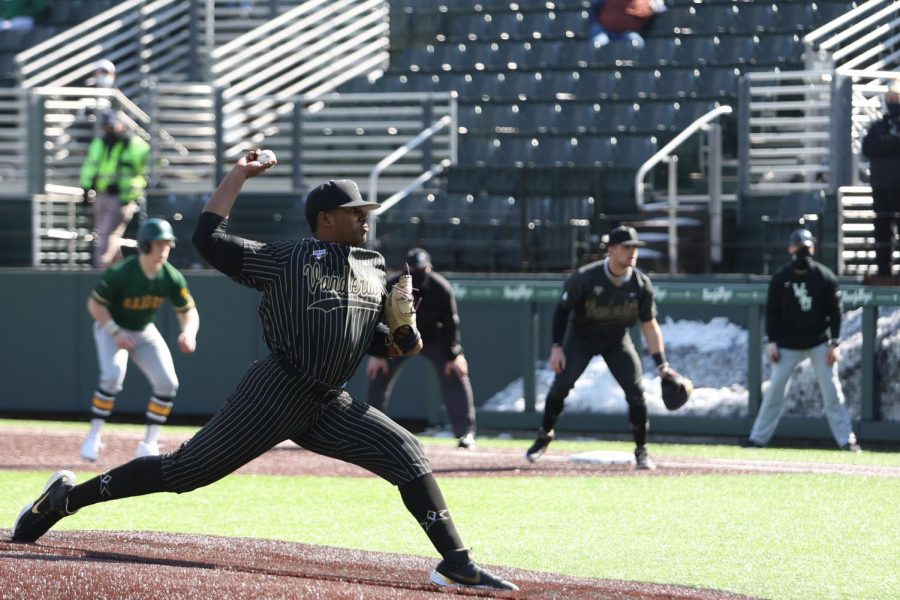 Opening weekend may not have gone as planned for Vanderbilt baseball, as its three-game series with Wright State—set to kick-off on Friday—was instead postponed to a Monday doubleheader due to inclement weather. But surely, the first leg of the doubleheader, a 14-1 VandyBoys victory, was everything they had expected.

Head coach Tim Corbin gave Kumar Rocker the nod for the first game of the season, and the junior ace did not disappoint. In four innings, Rocker turned in one hit, eight strikeouts and one walk en route to a scoreless outing and a win.

Fittingly, Rocker started his season off by striking out three-straight Wright State Raiders in the top of the first. Vanderbilt’s offense, however, did not get off to as hot of a start. At the bottom of the first, a scary scene dampened the mood for the VandyBoys.

Senior left fielder Cooper Davis, the Commodores’ leadoff hitter, started his season with a foul ball off the top of his helmet, nearly clipping his own face. Two pitches later, he did just that—a foul ball ricocheted off his face, leaving him bloodied and ending his day before he could finish his first at-bat. He was replaced by freshman Jack Bulger, who went 0-4 in his Vanderbilt debut.

As the day went on, Rocker never had any trouble with the Raiders. And in the bottom of the second, he received some run support to solidify his win.

Parker Noland kicked off the inning with a single to left-center, and subsequent doubles from Tate Kolwyck and Domonic Keegan drove in two runs. Vanderbilt jumped out to a 2-0 lead after two frames, and the Commodores never once looked back.

They padded their lead again in the fourth, as Isaiah Thomas hit a moonshot over the left field wall to go up 4-0.

Thomas’ solo home run was Vanderbilt’s first of the year, but he wasn’t the only Commodore to go yard. In the bottom of the fifth, Jayson Gonzalez knocked a high-flying shot of his own over the center field fence, driving in Enrique Bradfield Jr. and extending the lead to 5-0.

While the offense kept cruising, sophomore pitcher Sam Hliboki had a minor scare on the mound when he came into relieve Rocker in the fifth. He loaded the bases in two consecutive innings—the first time, with no outs and two baserunners courtesy of Rocker, and the second time with two outs—but pitched his way out of both jams. Hliboki managed to emerge through two innings surrendering just one hit, one walk, two strikeouts and no earned runs.

The offense continued its scoring ways in the sixth and seventh innings. Dominic Keegan drove in a run off of a fielder’s choice and Gonzalez brought another home on a hit-by-pitch, capping off their lead at 7-0 through six frames. Ultimately, Vanderbilt stranded the bases loaded in the sixth, as Bulger grounded into a double play. But they came back in the seventh with a Noland RBI double, again extending the lead—this time, to 8-0.

Chris McElvain was the next pitcher out of Vanderbilt’s bullpen, and he proceeded to work through the Raiders with ease in the seventh. But McElvain in the eighth allowed the first run of the year, as an RBI double for Wright State put them on the board. Vanderbilt’s lead turned to 8-1 after McElvain’s mishap, but McElvain kept the Raiders to one by pitching a scoreless ninth inning.

The VandyBoys offense continued to plague Wright State’s pitching in the eighth. After leading off the inning with a triple, Keegan was driven in by Bradfield Jr.’s single to right. A subsequent hit-by-pitch and walk had gifted Vanderbilt with another one-out, bases loaded scenario, after which Wright State plunked C.J. Rodriguez and brought another run home. Thomas, innings after his solo shot, wasn’t finished: he proceeded to single to center field, scoring two more, then Kolwyck added another two RBIs of his own with a double to right center. Vanderbilt’s six-run eighth inning extended the lead to 14-1, where it stuck for the remainder of the contest.

Vanderbilt will look to make it a two-game sweep this afternoon, as they will face Wright State once more.