Vanderbilt falls to Kentucky in another heartbreaker

Despite a career-high 29 points and 16 rebounds from Dylan Disu, the Commodores came up short against the Wildcats in a game that Kentucky led from start-to-finish. 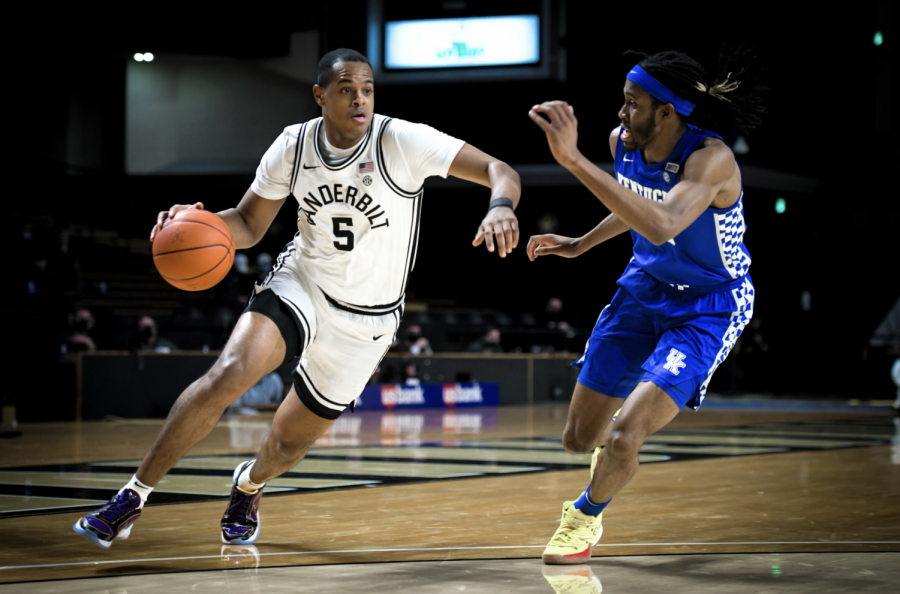 DJ Harvey drives to the basket in Vanderbilt's 82-78 loss to the Kentucky Wildcats on Feb. 17, 2020. (Hustler Multimedia/Truman McDaniel)

In yet another heartbreaking loss at the hands of the Kentucky Wildcats, the Vanderbilt Commodores were defeated 82-78. With less than a minute remaining, Jordan Wright had a chance to give Vanderbilt a one-point lead with a pair of free throws, but both attempts rimmed out.

The Commodores quickly fell behind 10-0 thanks to a pair of three-point makes from Brandon Boston Jr. and Davion Mintz. Vanderbilt countered with a three-point play from Dylan Disu and a tough, contested layup by Max Evans, but Kentucky exploded from there, jumping out to a 25-8 lead as Boston Jr. added another five points.

The Commodore offense was stagnant for much of the first half, relying on isolation drives that predominantly resulted in turnovers or contested shots. Scotty Pippen Jr. especially struggled to get going against Kentucky’s defense, turning the ball over four times in the first ten minutes of action.

Vanderbilt was finally able to cut into the Wildcat lead late in the first half thanks to multiple defensive stops and some energized play by Disu. With 1:08 remaining in the half, DJ Harvey sank two free throws to make it a 35-27 game. The Commodores, however, were unable to keep their composure to end the half.

First, Mintz was left wide-open behind the arc and promptly buried a three. On the next possession, Devin Askew forced Pippen Jr. into his fifth turnover of the half. In an act of frustration, Pippen Jr. then shoved Mintz out of bounds to stop the fast break. A flagrant-one penalty was called, and the Wildcats turned it into a four-point possession. Issac McBride stopped the bleeding with a three-pointer on the right-wing to make it a 42-30 game at halftime, but the last sixty seconds proved to be extremely costly for the Commodores.

Disu had perhaps the best half of his already impressive season, pouring in 17 points on 6-12 shooting and adding eight rebounds. Unfortunately for Disu, however, he had no help around him in that first period. No other Commodore scored more than four points, and the SEC’s second-leading scorer, Pippen Jr., was held scoreless through the first twenty minutes.

Despite the poor end to the first half, Vanderbilt came out of the gates hot to start the second as Clevon Brown, who was bothered with what appeared to be a small knee injury throughout the first period, got going. Brown scored a quick eight points, six of them coming off of dunks, forcing Coach John Calipari to call a timeout with the score 44-40.

The Commodores were able to tie it at 46 apiece, as Disu split his free throw attempts after Kentucky was called for a technical four for having six men on the court. But Stackhouse went with a small lineup from there, playing Disu at the center, and Kentucky took advantage of Vanderbilt’s lack of size on the interior. The Wildcats grabbed multiple offensive rebounds that led straight to several second-chance buckets, stretching their lead to 60-53.

Disu, Pippen Jr. and Jordan Wright all made several key baskets throughout the last few minutes, but Vanderbilt was unable to come up with stops on the defensive end. Things got interesting in the last ninety seconds of play, however, as Vanderbilt was able to create some key turnovers.

With 1:16 remaining, Disu converted an and-one, making it a 74-71 game. Pippen Jr. then stole the ball from Mintz leading to another Disu lay-up to bring it to a one-point game. On the ensuing possession, Wright drew a huge charge on Keion Brooks Jr. as he attempted a monstrous dunk. A scrambling possession for the Commodore on the offensive ended in Wright drawing a foul with a chance to give the Commodores a one-point lead with 33 seconds remaining. Instead, Wright missed both free throws.

Vanderbilt attempted to play the foul game to give themselves a chance, but, unlike the Commodores, Kentucky didn’t waste their chances at the charity stripe. The Wildcats did not miss from the line in crunch time, finishing the game shooting an insane 24-25. Down three with 19 seconds remaining, Stackhouse drew up a nice set out of a timeout that gave Disu a great look from three, but it was off-target.

“We fought back and had it in striking distance,” Stackhouse said. “Our defense really settled in in the second half. We were able to get some stops. [We] put the press on them a little bit and forced them into some turnovers, but just came up a little short at the end.”

Disu finished with a career high in both points and rebounds with 29 and 16, respectively, but it was not enough as the Commodores came up short in yet another close game. After a scoreless first half, Pippen Jr. finished with 21 points but on an inefficient 5-19 shooting.

“Dylan was awesome. He played great, he scored well for us,” Stackhouse said. “Scotty was still able to get his. [But] that’s really the difference. They had five guys in double figures. I think if we get another guy in double figures, we win the game. Simple as that.”