Dining services closed and a dining tent collapsed as students and staff handle heavy precipitation and more than two inches of snow. 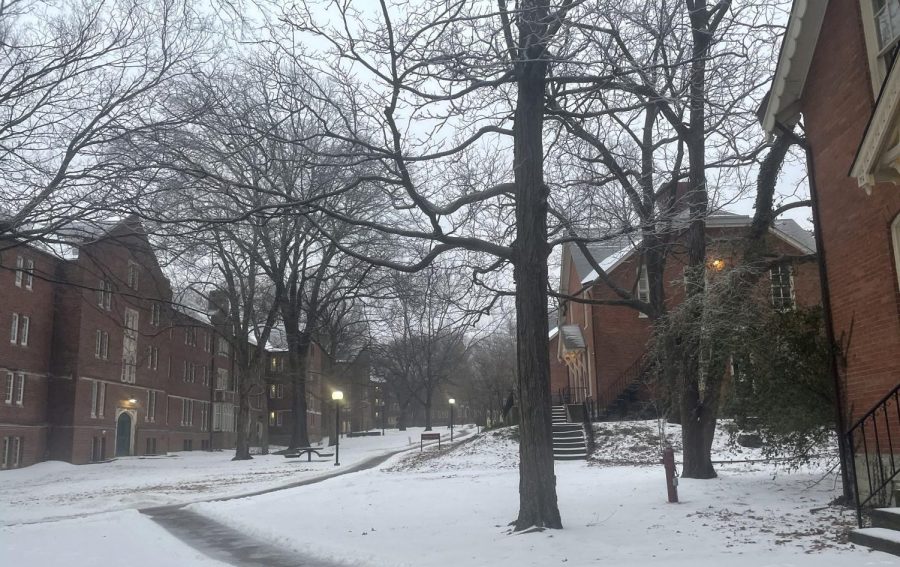 A path behind McGill Hall is covered in snow. (Hustler Staff/Jessica Barker)

Remember the excitement surrounding the anticipation of a snow day? You would wake up to flurries outside your window and know that in addition to the frosted tree tops and icy roads, time would be frozen as well: today’s homework would become tomorrow’s as snow meant cancelled classes. Unfortunately, the only thing more harsh than the current weather conditions is the reality that Zoom has made snow days a thing of the past.

In preparation, the Dean of Students Office sent an email to students at approximately 6:15 p.m. CST on Feb. 14, notifying them that services including mail, VandyRide and Campus Dining would be subject to reduced or suspended hours.

The Dean of Students Office sent a follow-up email at 9:12 a.m. CST today notifying students that the COVID-19 testing center would be closed. As of 5 p.m. CST, students were instructed to forgo their COVID-19 tests if they regularly test on Mondays and Tuesdays.

The last time Vanderbilt cancelled classes was in January 2016 after receiving eight inches of snow. This time, Vanderbilt left it up to faculty to make the decision of whether to continue in-person classes.

Around 1 p.m. CST, students noticed that one of the dining tents on Commons had collapsed. Vanderbilt University Police Department (VUPD) public relations has not responded to immediate requests for comment.

First-year Julian Delgado was planning on going to the Recreation Center early in the morning, but received an email that his appointment to use the equipment was cancelled due to the weather. As a Floridian, he said that the snow was new to him, and he appreciated the Vanderbilt staff’s efforts.

“I can always work out in my room,” Delgado said. “[The] Rec is kind of a bonus. Regardless, I was surprised at how smoothly the dining halls were running. I heard the workers talking about having to stay open all day without any breaks. I really appreciate that they are working so hard for us.”

Some students including sophomore Jack Yarnall expressed disappointment in the lack of communication from administration offered.

“There’s only word of mouth saying what will be closed,” Yarnall said. “Everyone is on their own—if you have class, you have class. There is no real general response.”

Yarnall also noted that he would have liked to have classes cancelled given the surrounding circumstances.

“It’s a cold day. It’s fun and exciting, but we’re still cooped up, doing work and we are already mentally exhausted. It would have been nice to take the day off, especially with the lack of breaks in general this semester,” Yarnall said.