Coach Stackhouse stayed optimistic looking back on Vanderbilt’s loss to the Bulldogs and touched on some untold storylines of the contest. 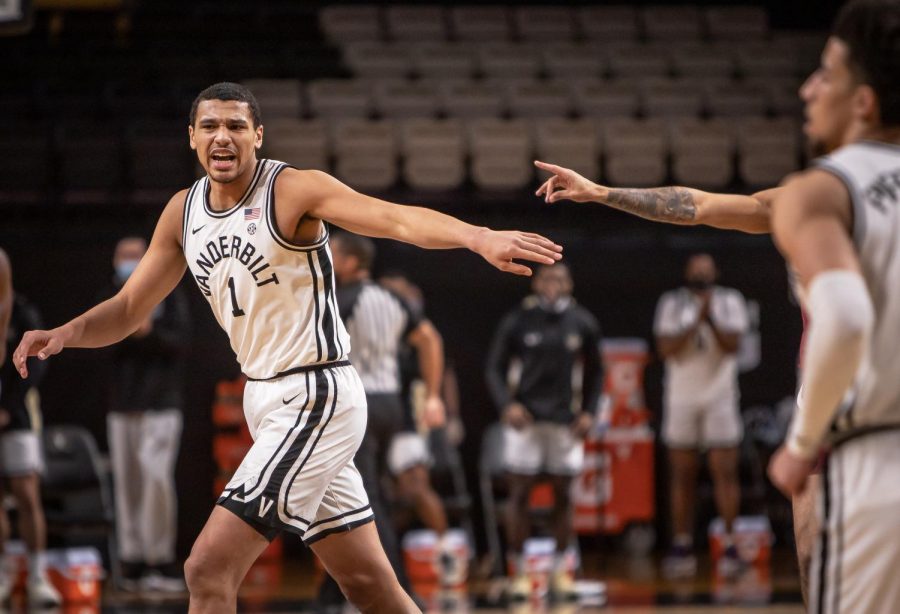 Head coach Jerry Stackhouse was interviewed on ESPN’s The Commodore Hour on Feb.8 and had a lot to say about the Commodore’s most recent loss to the Georgia bulldogs. They lost 73-70 last Saturday, but with every noted area where Vanderbilt needs to improve, Stackhouse also took away a positive from the game.

“We did a lot of good things,” Stackhouse said. “But we gotta learn how to win those games. I think that’s one of those things where we’re playing more consistently now and giving ourselves a chance to be in the games here late because we’re executing both sides of the ball pretty well—still not as well as we would like, but we’ve given ourselves a chance.”

Stackhouse’s team has played better in recent games, thanks in part to a few players coming off the inactive list (due to both injury and COVID-19). The team bested South Carolina 93-81 on Jan. 30, but then had their Texas A&M game cancelled due to COVID-19 complications, something that has become a regularity for all of Vanderbilt sports this year.

The Commodores then battled hard against the Bulldogs, even fighting to a tie with less than a minute to play and having a potential go-ahead possession with just 15 seconds left. All the same, they would end up short, losing late by just three points and reminding Vanderbilt fans of last year’s close loss to Georgia.

Stackhouse continued to shed some light on other problems the team had, while also touching on their overall strong defensive performance.

“[It’s about] just being a little sharper there at the end, making sure [we remember the] things that we talked about: going to the basket, gathering off two [feet], and not launching, which gives ourselves an opportunity to get the benefit of the doubt more so than not,” Stackhouse said. “But we also did some things as far as being active defensively, that were some positive signs of where we want to go.”

Vanderbilt forced 21 turnovers, scoring 29 points on those extra possessions, compared to just 13 of their own giveaways. However, it was hard to stop Sahvir Wheeler and PJ Horne, who combined for 30 in the game with Horne going four-for-five from beyond the arc.

Forward Dylan Disu was also a guest on the show and echoed Coach Stackhouse’s thoughts defensively.

“Some of our execution wasn’t really that great defensively, but somehow we still forced that many turnovers, which was really good. I think it helped us turn onto offense really quickly,” Disu said.

Disu continued to compliment his teammates’ encouragement this season, noting their enthusiastic support from the bench.

“I think the benches are doing a really good job as of late,” Disu said. “Everyone’s standing up cheering, chanting defense and talking.”

Stackhouse also took some time to compliment the play of Jordan Wright, who put up 12 points, 5 rebounds, and 3 assists in the Georgia game.

“He’s probably one of the few guys that we can just say individually, defensively, can guard his man,” Stackhouse said. “He’s the most amazing competitor.”

He also highlighted one of the game’s unseen highlights. It was late in the contest, and Trey Thomas had just missed a couple of shots, but instead of leaving Thomas to stew in his own frustration, Disu, a sophomore, looked the part of an upperclassman, encouraging him to shoot the ball more.

“I think probably one of my favorite moments of that game,” Stackhouse said. “These guys are pulling for each other, and afterwards, he [Trey] came right out there and made that next one.”

The Commodores will face off tomorrow in Memorial Gymnasium against Auburn at 7:30 p.m. CST and will look to continue their streak of improved play, but this time earning a win in the process. Stackhouse shared his thoughts on the Tigers and his hopes for the matchup.

“Obviously they’re a team that kind of goes as Sharif Cooper goes—he has the ball a lot, a lot of usage with them. And he’s a great, great passer. He can shoot it, and he can score at the basket, so we got our hands full with him,” Stackhouse said. “They’re one of the best shot blocking teams in the country, so we have to go in and have a plan as we attack the basket.” Stackhouse said. “They’ve struggled a little bit here late, but we are definitely aware that they’re a team that can cause a ton of problems for us in different areas. But if we’re sound, and we stick to our principles and our coverages, then I feel like we’ll be fine.”