Jerry Stackhouse spoke to the media Friday morning prior to Saturday’s matchup against the Georgia Bulldogs. 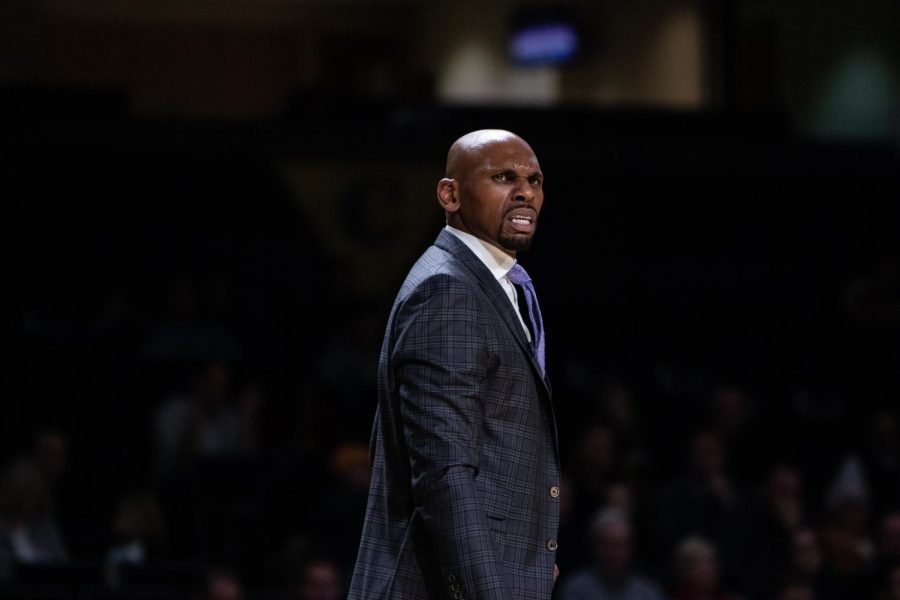 After a 93-81 victory against the South Carolina Gamecocks, Vanderbilt was prevented from carrying their momentum forward due to Texas A&M’s COVID-19 issues. The quiet week for the men’s basketball team allowed the players to recover and gave head coach Jerry Stackhouse time to prepare his squad for Saturday’s challenge against the 11-6 Georgia Bulldogs.

In his opening remarks Friday, Stackhouse shared his team’s excitement to get back on the court, calling the cancellation a “blessing in disguise.” He referenced the benefits of extra time off for the rehabilitation of Scotty Pippen Jr. and Dylan Disu, who were both dealing with minor injuries.

“All guys are available this weekend, probably for the first time this year, ” Stackhouse said with respect to the health of the team.

Not only did the time off allow for more rest, Stackhouse mentioned that Thursday was a “spirited practice” for the team, and that he may have to take it “back down a little bit today to get ready for tomorrow.”

Coming off of the win against South Carolina, Stackhouse discussed the process of maintaining energy within the team.

“Well, I think that’s the easy part. The hard part is after a tough loss, to try to get that again. I think they are excited to play, to get back on the court, and to have some success,” he said. “Our guys believe in what we’re doing, and it just helps to see the fruits of your labor.”

Stackhouse then shared his vision for the team as they fight their way out of a 5-8 start to the season.

“We have short-term goals, and that is to get back to .500, not thinking about the Southeastern Conference (SEC) tournament or anything other than these small increments.”

The upcoming matchup with Georgia brings to mind last year’s heartbreaking loss to the Bulldogs, which Stackhouse mentioned as a similar task and a source of motivation.

“We are facing the same issues with this team, with their speed getting downhill, along with pulling the trigger on five-out alignments, which put a lot of stress on your rotations, so we have to be sharp. We know that we owe them. I think the guys definitely remember the game,” Stackhouse said.

Stackhouse then spoke to the fundamentals that will be required for paying back their debt.

“But we just have to come out and do the things we’ve been doing and do them on a possession by possession basis,” Stackhouse said. “We need to be as perfect as we can be on the defensive end, and it seems elementary, but it’s the way we need to look at it.”

“If we would’ve found that [the cancellation] out before we played, I would have had one less loss in the loss column,” Stackhouse joked. Speaking further on the 2020 SEC tournament, he said, “Last year, we were playing pretty good basketball. We were excited to go into the tournament, and then it came to a screeching halt. So this year there is going to be a lot of uncertainty around this tournament as well.”

Mentioning the concerns about safety with an SEC tournament in 2021, Stackhouse discussed Vanderbilt’s administration and its approach to COVID-19 and player safety.

“Our administration is unbelievable, with tougher protocols to keep everybody safe from it,” Stackhouse said. “With our student-athletes, we are just making sure that if anybody does contract the disease, that we ramp up the heart stuff and the MRIs, and doing those types of things.”

He then gave some perspective and light to the complicated world of sports amidst a pandemic.

“No matter how careful you are, how much you are doing, it [COVID-19] is a ghost. You can’t see it, but it can affect you at a moment’s notice. That’s why I have a lot of respect for being where we are right now and hopefully we can stay that way.”

Circumstances willing, Coach Stackhouse and Commodores will face off with the Bulldogs on Saturday at 5 p.m. CST, hoping to avenge last year’s loss and win their second SEC game this season.