Commodores travel to Georgia in hopes of mounting a win streak

Vanderbilt looks to make it two in a row in SEC play and avenge last year’s stunner against the Georgia Bulldogs. 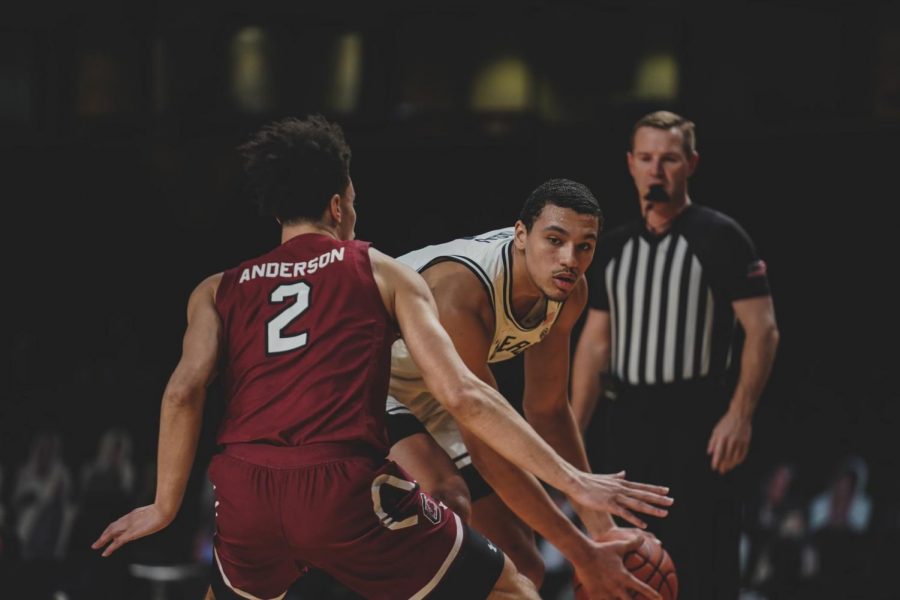 Vanderbilt will head to Athens, Georgia, this weekend for a Saturday night (5:00 p.m. CST) matchup with the Georgia Bulldogs. The Commodores come into the matchup at 5-8 (1-6) overall, while Georgia sports an 11-6 (4-6) record.

The Commodores will look to avenge last year’s heartbreaking loss against the Bulldogs in Memorial Gymnasium and also win back-to-back Southeastern Conference (SEC) games for the first time since March of 2020, following their 93-81 drubbing of South Carolina last Saturday.

Georgia comes into Saturday’s matchup as a bit of an unknown: the Bulldogs won their first seven games of the season (with the most notable win over Cincinnati), then lost four-straight to start SEC play and now have won four of their last six, most recently over star point guard Sharife Cooper and Auburn.

Still, this is not a team on par with the caliber that Vanderbilt has faced throughout its SEC slate. Georgia has lost four games by double digits in conference play—by ten to Mississippi State, by 30 to Arkansas, by 18 in its first contest against Auburn and by 24 to South Carolina. Of Georgia’s four SEC wins, two have come against Ole Miss, which is just 9-8 on the year.

After losing guard Anthony Edwards from last year’s roster to the draft , Georgia head coach Tom Crean’s 2021 squad is headed by a fellow member of the 2019 Bulldog recruiting class: point guard Sahvir Wheeler. Wheeler leads the team in both points (13.5) and assists (7.4) per game. Wheeler, along with freshman guard K.D. Johnson (13.1 ppg) and sophomore forward Toumani Camara (12.7 ppg), have headed an efficient offense for the Bulldogs thus far:

Defensive rotations are a big focus for Dores tomorrow.

The Bulldogs are ranked 71st in adjusted offense per KenPom, which is eighth in the conference, while playing with one of the fastest tempos in the league. If there’s one area of weakness in this Georgia offense, it’s that the Bulldogs shoot just 32.3% from deep, which is tenth in the SEC. Vanderbilt should prioritize keeping the lane clogged Saturday in hopes that percentage stays true.

Where Georgia struggles is on the other end of the floor: the Bulldogs give up 75.4 points per game (12th in the SEC) and rank 122nd in adjusted defense per KenPom. They also block just 2.3 shots per game, which ranks 13th in the conference.

As for Jerry Stackhouse and co., the Commodores will look to build off their inspired performance against South Carolina last weekend. Vanderbilt dominated that contest from start-to-finish thanks to improved defensive effort, emphasis on easy buckets in transition and a third wheel in Max Evans (who scored a season-high 29 points) to help out Scotty Pippen Jr. and Dylan Disu on offense.

The key for Vanderbilt Saturday will be to continue being aggressive on both ends of the floor—against the Gamecocks, Vanderbilt got to the free throw line 27 times and also forced 16 turnovers from Frank Martin’s crew. In that contest, that aggressiveness allowed Vanderbilt to dictate the style of the game, which will be important on the road in Athens as Georgia fouls at the fifth-highest rate in the SEC.

Another big determinant of the outcome on Saturday will be the rebounding battle. Size versus  skill will be a matchup to watch in this one: Georgia doesn’t feature a player taller than 6-foot-9 on their roster, and yet the Bulldogs are second in the SEC in offensive rebounds per game. The leader in offensive rebounds, though, is South Carolina, who Vanderbilt shut down Saturday. The Commodores held a 38-31 advantage on the boards against South Carolina, including 12 offensive rebounds. That was a big factor in their success against a Gamecock team that prides itself on controlling the glass. Look for forward Dylan Disu and Vanderbilt’s tough-nosed guards Jordan Wright and Max Evans to be x-factors in this area.

Grabbing a road win at this juncture in the SEC slate would be huge for Stackhouse and Vanderbilt, and it is certainly attainable against an inconsistent Georgia team. The Bulldogs, who are 4-6 in SEC play and like to play fast and crash the offensive boards, mirror South Carolina in some respects, and Vanderbilt will need to take it to Georgia on Saturday night like they did against the Gamecocks in order to come out victorious and avenge last year’s heartbreak.