Vanderbilt head coach Clark Lea addressed the media on National Signing Day to discuss his incoming class, his coaching staff and how he believes Vanderbilt can turn itself into a recruiting power. 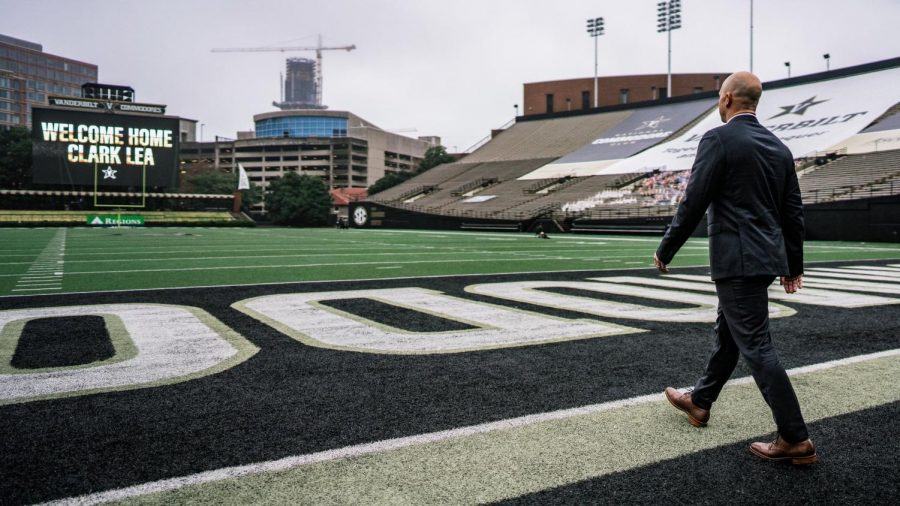 Head coach Clark Lea on Wednesday addressed the media after his first National Signing Day at Vanderbilt, a day he labeled a “ceremonious start” to the future of Commodore football.

While most of the recruits first verbally committed under former head coach Derek Mason, Lea and his staff managed to both retain a myriad of those previous commitments and add a few pieces of their own. By day’s end, Lea’s 23-person recruiting class ranked 49th in the nation on 247 Sports and 34th on Rivals, respectively.

According to Lea, the 23-person class is only half the story.

“Really, I feel like I’ve got an 80-man class already in the building,” he said in Wednesday’s press conference. “This is new to everyone.”

Lea was referring to the immense coaching turnover of late, which saw just one coach, Jovan Haye, and a couple staffers retained after Coach Mason’s firing. Since then, Lea has just about rounded out his staff with three new coordinators in Justin Lustig, David Raih and Jesse Minter, along with various other assistant coaches.

Lea spoke highly of Raih on Wednesday, explaining why he’s excited about the hire.

“Smart people figure stuff out. To me, I wanted to have a coordinator that was willing to look at what our strengths are, where the playmakers are and find creative ways to get them the ball in space,” he said. “I wanted someone who had experience in creating matchups and formational issues, shifts and motions to get one-on-ones that benefit us, and those are all things that David [has done].”

Lea said he wanted an “entrepreneurial spirit” in his offensive coordinator, adding that Raih provides just that. But Raih isn’t the only entrepreneurial mind on staff: with the addition of Barton Simmons as general manager and Smoke Dixon as director of scouting, Lea himself has created a new, unique branch on his staff—a branch that few other programs in the country can boast.

He noted that Simmons is still “growing” into his new role with the program, and pointed out that this role—and this department—can not only help Vanderbilt identify high talent and good fit, but also take some of the recruiting burden off the coaching staff.

“This is about how you insulate the recruiting process in two ways: you have to insulate it from subjective opinion,” Lea said, continuing, “And you have to take some of the decision-making away from the coaches and put it in this office that really focuses on the material that matters; That’s the character assessment, the feedback from the coaches, the fit here at Vanderbilt … and the raw material.”

Lea stressed the player’s fit as one of the most important characteristics in a recruit. He noted that Vanderbilt will challenge its student-athletes both on and off the field, and he hopes that the scouting staff—led by Simmons and Dixon—can help identify those traits.

Furthermore, Lea believes coaching at a university like Vanderbilt is an advantage, especially in the recruiting game.

“We have the ability here to recruit to a world-class university, recruit to a football program with a ton of energy behind it,” he said. “Once we have a chance to get this staff around prospective student-athletes, what we’re going to recognize is that there’s not a lot of better places to go, if I’m a player. That mindset and that mantra and that level of belief is going to deliver us a roster that we’re going to be really excited about.”