Vantea: The push to bring bubble tea to Vanderbilt 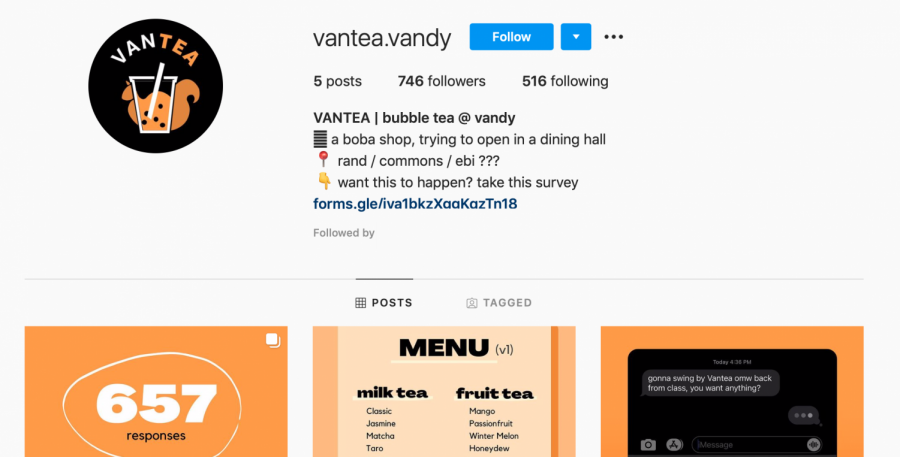 Vantea is a social media-backed initiative to open a student-run boba shop in a campus dining hall. Screenshot from @vantea.vandy (Hustler Staff/Marissa Tessier)

Bubble tea, a sweet Taiwanese beverage, is a trendy staple that serves as either a reminder of home or a facet of gastro-cultural opportunity for many Vandy students. With that being said, most boba shops anywhere near the Vanderbilt campus require at least a car ride to reach.

Senior Joshua Cho and first-year Lyndon Shi aim to address this deficit by garnering support to open a student-run boba shop in a campus dining hall through their latest social media-spurred initiative: Vantea.

As a first-year student, Shi was frustrated by the generic drink options available in the dining halls and wanted a more diverse selection.

“There’s a high demand for eastern cuisine that Vanderbilt has not been able to match up to. [Vantea] is a great opportunity to show different types of products and diversity within food choices,” Shi said.

In the past, boba tea was available on the Vanderbilt campus and could be purchased at the now-closed Bamboo Bistro, which was replaced by Suzie’s Coffee Shop. Since then, bubble tea has been difficult for students to obtain and financially exclusive, as many students have splurged to order it through delivery services off the Commodore card.

After launching the @vantea.vandy Instagram page, the duo released a survey asking students if they were interested in having bubble tea on campus. Per Cho, the survey has had over 650 responses with 98 percent of responders showing interest, confirming Cho and Shi’s belief in the demand for the beverage.

In addition to bringing boba tea to students, Cho and Shi wish to increase student entrepreneurship on the Vanderbilt campus and to serve as an inspiration for other students to pursue their own entrepreneurial efforts.

“Start up culture at Vanderbilt compared to other schools is pretty weak, and we think that having Vantea approved and publicly student-run would be great for Vanderbilt,” Cho said. “I feel like students would feel more supported by the university if this were approved.

Cho and Shi have been working alongside the Wond’ry to increase student entrepreneurship on campus and have gotten support from faculty members.

“If Vantea were to happen, it would be a symbol that Vanderbilt really cares about its students, and that our ideas are something worth investing in,” Shi said.

The team behind the movement knows that bubble tea is more than just a drink: it’s culturally important. By making it accessible to Commodores, Cho and Shi wish to spark cultural dialogue among students.

“I have a lot of friends who have never even heard of bubble tea because they’ve never seen it. But, if it was on campus, it would start a lot of conversations about [Asian culture],” Cho said.