Vanderbilt earned its first SEC win of the season thanks in large part to Max Evans' season-high 29 points and five threes. 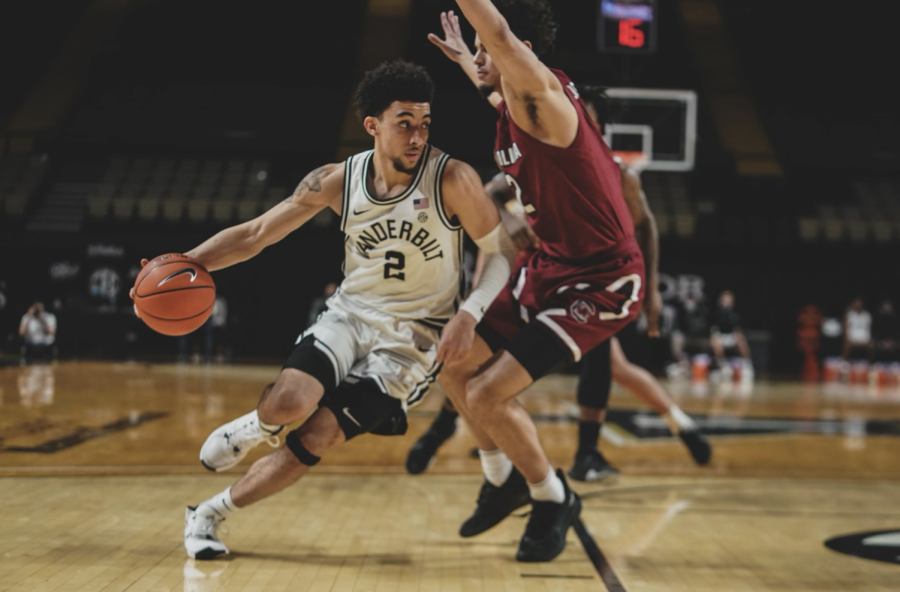 The Vanderbilt Commodores defeated the South Carolina Gamecocks 93-81, earning their first SEC win of the season.

Vanderbilt jumped out to a big lead early and, though the Gamecocks narrowed the margin, the Commodores never surrendered the lead.

“When us three get going, everyone else gets going, and that’s the recipe to win every game we play,” Evans said of the combined production between himself, Pippen Jr. and Disu.

The Commodores jumped out to a fast start thanks to hot outside shooting and some sloppy play by the Gamecocks. South Carolina turned it over three times in a span of three minutes leading to some easy Vanderbilt transition points and open threes. By the first media timeout, the Commodores were up 19-8 with Disu and Pippen Jr. combining for 15 points and three three-pointers.

The next few minutes were more of the same for the Gamecocks, as they turned it over two more times. Vanderbilt stretched its lead to 30-16 by the 12:07 mark thanks to 10-13 shooting from the field and 4-5 from three.

South Carolina didn’t go away quietly at first, however. The Gamecocks quickly got back into the game with a 14-0 run to make it 30-27, with eight of those points coming with both Pippen Jr. and Disu on the bench. A Max Evans three-ball ended the South Carolina run, and Pippen Jr. then found Ejike Obinna for wide-open dunks on back-to-back possessions to push the lead back to 37-31.

Vanderbilt really created its separation in the final 4:15 of the first half, taking advantage of five more Gamecock turnovers to go on a 15-3 run. The Commodores went into the locker room leading 52-37, getting 15 points apiece from Disu and Pippen Jr. and 15 more points off of South Carolina’s 11 first-half turnovers.

The Gamecocks were never able to make it a serious game in the second half, as the Commodores never allowed them to get within single digits and pushed their lead to as much as 25. Although the final score showed a 93-81 victory, the game was never that close as Vanderbilt held a firm 15-20 point lead for almost all of the second half.

Evans was the biggest story of the second half, as he added 18 more points and 4 three-pointers. His 29 total points were his highest of the season, as he has spent much of the year in a severe shooting slump. He finished the game shooting 9-15 from the field with five threes.

“When you get some easy opportunities, get a few lay-ups, it helps when you start shooting the three-ball,” Coach Stackhouse said. “I think Max was a big benefit of that. He was one of those guys getting out early in transition, getting a couple lay-ups, and then the basket got huge for him.”

The Commodores will be back in action on Feb. 3 when they battle Texas A&M on the road.