Q&A: Vanderbilt women’s basketball head coach Stephanie White speaks to the Hustler about her team’s decision to discontinue its season

Head coach Stephanie White details the challenges of playing in the COVID-19 pandemic and how the team came to a decision to cancel the remainder of its season. 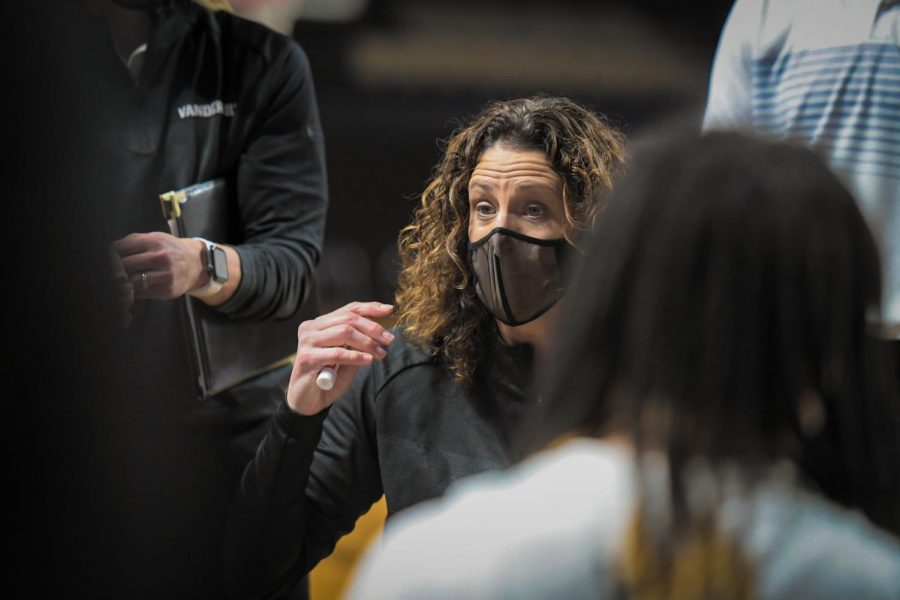 Head coach Stephanie White spoke with The Hustler over the phone to discuss the tough decision the women’s basketball team made to cancel the rest of its season due to health and safety concerns.

The team had to shut down twice due to positive COVID-19 cases and contact tracing that left the team below the SEC’s minimum available player threshold of seven players. Injuries and opt outs at the end of the season left the team with just seven healthy and available players to finish the last six weeks of the season. The Hustler created a timeline of the team’s roster troubles.

Was there ever a point earlier in the season when you thought that the roster would shrink to just seven healthy and available players?

No. We started the season off having to cancel or postpone our first three games because of COVID, but we were very optimistic about players coming back. And I think it became a realization when players weren’t coming back and that players that we had available either ended up opting out or had more significant injuries. The fear of long-term setbacks, as well as the overall health and safety concern, came into our players’ minds. We had conversations about it, and when they decided they wanted to shut it down, we were supportive. We look forward to working and getting healthy and being ready for next year.

Was there a team discussion about the safety of playing in a pandemic after sophomore guard Demi Washington was diagnosed with myocarditis after a case of COVID-19?

There’s been conversations about safety playing in a pandemic since the beginning. We’ve had multiple conversations with doctors on our calls as well as with our players discussing protocols. We’ve had quite a few conversations about that and quite a few conversations about what league minimum numbers were to play. It got to the point for us where the combination of opt outs and injuries just became too much. It’s one thing if you’re playing a couple of games with seven players in a rotation versus if you have seven players that make up your roster. And that’s where we were, and our players had a tough decision to make, but they approached it in a mature, responsible way, and we support them.

Can you talk a little more about how the decision to cancel the rest of the season was made?

Obviously players, just like students, have their conversations with each other. We’ve had multiple conversations about where we were as a team with health and safety, particularly every time that something changed and every time there were multiple teams or leagues that had shutdowns. We reevaluated with the help of our doctors and gave our student-athletes an opportunity to voice their concerns. Each time we had those conversations, we moved forward. I think the last bit with the injuries and shutting down another player—I mean, this became our seventh rotational player who was now shutting it down, and it took us down to seven players on our roster. And of those seven, a couple were pretty gimpy. After we played South Carolina, we had another injured player who was going to have to shut down for the rest of the year. And then playing at Kentucky, the players and staff sat down and had a really honest conversation. They gave us their feedback, and told us what they wanted to do.

Were there any leaders in the conversation with the student-athletes that led to the decision to discontinue the season?

Chelsie [Hall] and Jordyn [Cambridge] spoke on behalf of the team. Those two spoke the most, but everybody had opportunities to talk about their concerns and their thoughts. And then there were some people who still wanted to play. I think players still wanting to play, but also recognizing where they were as a team and getting a feel for the decision that they were going to make together, was tough. I’m proud of how they did it. I’m proud that they continued to push through. And I’m proud that they were united in their decision.

What was athletic director Candice Storey Lee’s reaction to the decision?

She’s supportive. Candice is all about student-athletes, the student-athlete experience and the health and safety of student-athletes. We’re in an unprecedented time. We are in the middle of a pandemic. We’re trying to play an indoor sport with a lot of contact in the middle of a pandemic. We’re physically able to to work out, and we’re able to get socialization through our sport. But the mental and emotional toll that it takes for student-athletes to be able to position themselves to participate in a sport and the mental and emotional toll it takes every time there’s a setback makes it tough. It’s tough. Candice knows that. Our staff knows that. The players are the ones who are sacrificing and experiencing that. We all fully support our student-athletes and their decision, and we’ll continue to work towards next year.

There were a few other women’s basketball programs, including Duke and Virginia, that also canceled the rest of their seasons. Have you talked to coaches of other teams who decided to cancel the remainder of their seasons?

Yeah, I’ve had some conversations. I know that our administration has had some conversations as well. At the end of the day, it’s not these coaches making decisions, it’s really players making decisions about their health and wellness. I think one of the great things about collegiate athletics and the collegiate experience in general is that young people are learning how to make life decisions and take ownership of life decisions. As coaches, we’re competitors and we want to play. But there are also a lot of us coaches who are parents and who understand that it’s not normal. We’re not in a normal situation. Nothing about what we’re doing right now is normal.

Looking ahead, what does your timeline look like, and when are you expecting injured players to return to practice?

I think it’s a situation now where we just want to make sure they’re 100 percent healthy and working their way back. My goal is that hopefully we can have as many people as healthy as possible by the end of the spring so that we can go into a full summer of workouts healthy and ready to go.

Will the team be doing any practices or conditioning during the spring when they would have been playing games?

We’ll go back to what offseason workouts are like, and we’ll get the players healthy that need to get healthy. We’ll really work on getting stronger and work on skill development.

What are some positives from the season that you’re taking with you to build the program’s future?

I think we’ve got a lot of positives. I think we have a foundation of players that once we can get them all on the floor together, have the ability to take that next step. With the people that we added, like Brylee Bartram and with our incoming freshmen that we have next year, I think we’re going to be more of the team that we want to be. We’re a team that fought and clawed without seven rotational players. The great thing is that young players who normally wouldn’t be in the rotation got a lot of game experience, and there’s no substitute for game experience.

Responses have been lightly edited for clarity and length.