Missing a few key players proved to be too much for the Commodores to overcome, as they were beaten soundly at home by the Arkansas Razorbacks. 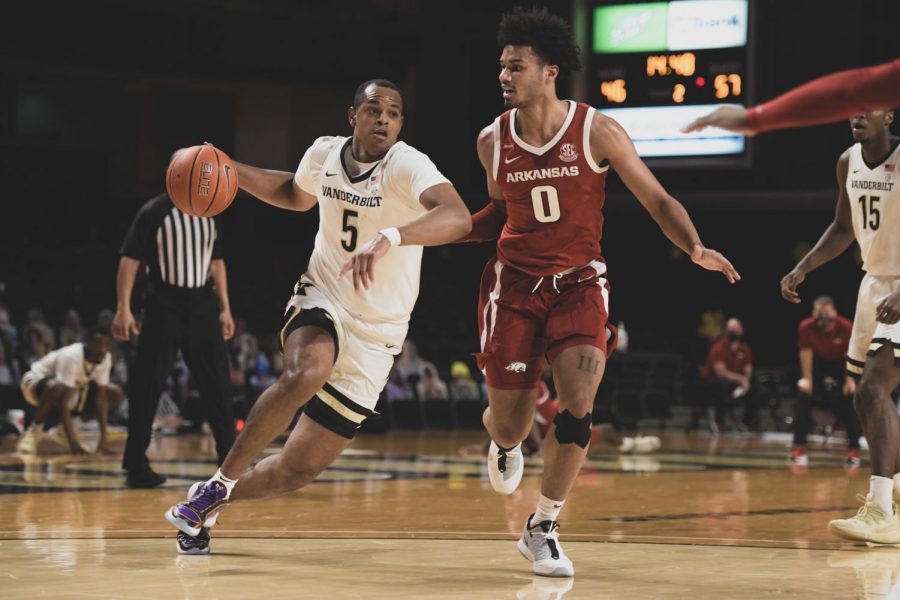 Missing key players has been the main storyline of Vanderbilt athletics from the start of the academic year, and with Dylan Disu, Quentin Millora-Brown and Akeem Odusipe all out for today’s game, short-handed play continued to cloud over Commodore fans’ heads—this time, haunting men’s basketball. Perhaps that makes the 92-71 loss to Arkansas slightly more palatable for Commodore Nation.

As students continue to trickle back into the Music City to return for a long second semester of classes, Vanderbilt men’s basketball returned to an empty Memorial Gymnasium after a week-long hiatus to take on the Arkansas Razorbacks. The game again tested Commodore fans; it seemed each time Vanderbilt got within a few points of the Razorbacks, Arkansas would make a few plays and pull further away.

The most telling aspect of the game was that Vanderbilt never held a lead. The Razorbacks were the first to strike and continued on a 9-0 run to open the game, and they never looked back. Vanderbilt did get within five a few times, but thanks to a late first-half push, the Razorbacks went into the locker room up ten and extended their lead from there. It was not the second half rally that Commodore fans would have hoped for—the team was generally unable to find a groove and continued to allow easy baskets from a defensive standpoint.

The Commodores played zone defense for much of the contest, and though stingy at times, it was completely porous at others, allowing consistent open looks and free driving lanes for the Arkansas offense. Meanwhile, the Razorback man-to-man defense was aided by some poor shot choice and inconsistent shooting, especially from beyond the arc, from the Commodores. Vanderbilt shot 44.8% overall, 68.4% from the line, and just 27.3% from three. The Commodores did lead in one category — turnovers. Unfortunately, Vanderbilt led the Razorbacks 16-11 here, highlighting the offensive issues that Stackhouse’s side had today.

Arkansas guards Jalen Tate and Moses Moody had particularly strong games for the Razorbacks, putting up 25-5-8 and 26-8-2 respectively. Tate also had the best +/- ratio for both teams at +22. Meanwhile, every Vanderbilt player that had upsides also had significant problems. DJ Harvey had a nice night shooting, going 3-6 beyond the arc on a team-high 30 minutes on the floor. On the flip side, he also had a -21 +/- and 3 turnovers. Harvey commented on the defensive issues after the game, stating that it’s more of an effort issue than an execution problem.

“We trusted the low man too much and were too open in the slot,” said Harvey.

The frustration from the game was evident in Coach Stackhouse’s press conference. He echoed Harvey’s comments relating to defensive issues, but added that it was a “focus issue” and was due to a “lack of attention to details.”

Stackhouse continued to say that the team’s play was simply not carrying over from practice to games, and that in the future, he is going to start playing guys who will come in and “accept that pressure.”

This will be a game to learn from and forget for the Commodores, as Disu and Odusipe will be back to play against Florida next Wednesday when Vanderbilt looks to bounce back and give the Gators their second home loss of the season.