A combination of injuries and opt-outs took out over half the team’s roster by mid-January. 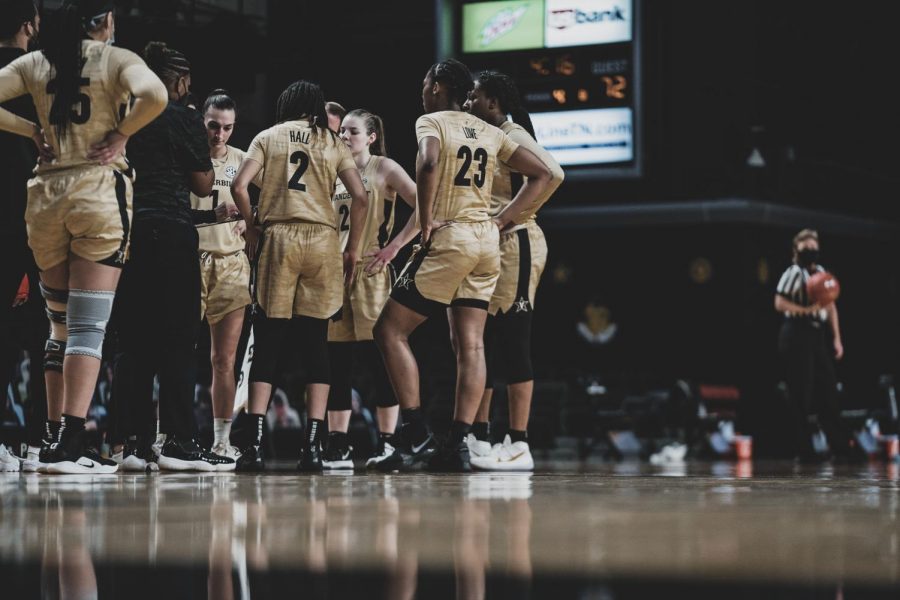 Vanderbilt women’s basketball began the summer with 15 players on its roster, and when it cancelled the rest of the season last Monday, just seven healthy players remained on the roster.

Vanderbilt returned to Nashville for team activities in early August. Junior guard Akira Levy opted out in the summer and later decided to transfer from Vanderbilt. Levy, a former transfer from Missouri, never played in a game for the Commodores.

Junior guard Jordyn Cambridge suffered a torn ACL in the final game of last season and faced a 10-to-12 month recovery timeline starting last March. In a best-case scenario, Cambridge would have been available to play in February for limited minutes.

Guard Kiara Pearl and forwards Kaylon Smith and Kyndall Golden were also unavailable to practice. Golden was recovering from a torn ACL. Smith was feeling the effects of a lingering injury from last season. Pearl’s injury was not disclosed, but she was not expected to play during the season.

Sophomore guard Brylee Bartram, a transfer from Florida, was ineligible to compete for Vanderbilt at the time due to NCAA transfer regulations requiring non-graduate transfers to sit out a year at their new school. Vanderbilt submitted a waiver for her to be immediately eligible, but the NCAA had not yet ruled on the waiver at the time.

The team began to prepare for its season without senior forward Autumn Newby, who opted out of the season before preseason practice.

Bartram’s waiver was still pending, and Vanderbilt planned to play without her for the 2020-21 season.

The four injured players from the summer were unable to return to practice.

The matchup with Tennessee Tech, scheduled for Nov. 25, was cancelled due to a positive COVID-19 test and contact tracing that left Vanderbilt below the seven-player minimum that is required by the SEC to play basketball.

Sophomore guard Demi Washington initially tested negative in contact tracing, but she later tested positive for COVID-19. In an interview with The Athletic, Washington stated that Vanderbilt required a cardiac MRI on top of the SEC’s requirements of an echogram, echocardiogram and blood work for all athletes who test positive for COVID-19 to return to play. The MRI revealed that Washington had myocarditis, mostly likely as a result of her COVID-19 case. Washington was ruled out for the rest of the season.

The next two scheduled games against Middle Tennessee and Texas Tech were also cancelled.

Seven players are available at the end of the shutdown.

Dec. 4, 2020 – Brylee Bartram’s eligibility waiver is approved by the NCAA

Bartram was ruled eligible to play in the 2020-21 season by the NCAA, and she avoided having to sit out the season.

Dec. 5, 2020 – Vanderbilt faces Arkansas-Little Rock in its first game of the season

Vanderbilt had enough players to face Arkansas-Little Rock, but its eight-player rotation was rusty coming off a two-week shutdown. The Commodores lost 82-74.

Golden made her first appearance of the year in a 97-58 win over Gardner-Webb. Her return, even with limited minutes, was welcomed by the team. Vanderbilt had played the previous four games with eight players.

Vanderbilt Athletics announced that the women’s basketball team’s final non-conference game of the year was cancelled due to “circumstances surrounding COVID-19.”

Vanderbilt announced that its games against Florida, Mississippi State and Missouri were postponed. COVID positives and contact tracing left Vanderbilt under the seven-player minimum to compete in an SEC game.

The program was shut down for two weeks for the second time in just over a month.

In early January, junior forward Brinae Alexander opted out of the rest of the season. Alexander averaged 11.8 points and five rebounds per game in five games earlier in the season.

Kiara Pearl, who had not returned from injury all year, also opted out in early January.

Eight players are available at the end of the shutdown.

Graduate transfer guard Enna Pehadzic had been suffering from a lingering lower body injury all season, and after the loss to South Carolina on Jan. 14, her injury had progressed to the point where she was unable to continue playing. She was ruled out for the remainder of the season and did not play in the team’s 80-73 loss to Kentucky.

The seven players who made up Vanderbilt’s rotation against the Wildcats were Chambers, Love, Bowman, Hall, Bartram, LaChance and Golden.

Seven players are available for the next six weeks of the season.

With Cambridge, Smith and Pehadzic hurt, four opt-outs and Demi Washington’s case of myocarditis, Vanderbilt faced finishing the season with seven players, and a single injury or a positive COVID test and contact tracing would have pushed the team below the SEC minimum of seven players.

As a result, the women’s basketball team came to a decision as a team not to continue its season for health and safety reasons.

The team finished the season with a 4-4 overall record and an 0-3 record in conference play.