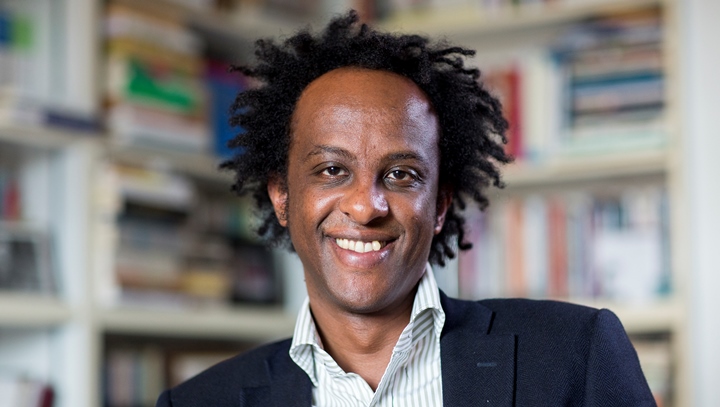 The event was hosted by Chancellor Daniel Diermeier and featured a vigil, keynote speech by Dinaw Mengestu and moderated Q&A. Ristina Gooden, a Master of Divinity student and president of the Divinity School’s Student Government Association, opened the event with the meaning of vigil and highlighted the importance of justice amid the pandemic.

“Let us be reminded that even in our sheltering-in-place, the work of justice still must be done,” Gooden said. “May we not be found guilty of what Dr. King called sleeping through a revolution.”

Dr. Andre Churchwell, Vice Chancellor for Equity, Diversity and Inclusion and Chief Diversity Officer, introduced Diermeier. This is Diermeier’s first MLK event at Vanderbilt, and this year, he introduced MLK day as a paid holiday for university staff. Prior to the designation, classes were cancelled to encourage participation by students and faculty, but staff had to coordinate attendance at MLK events with their supervisors. During the event, Diermeier talked about improving inclusivity at the national level as well as within the Vanderbilt community.

“We do not simply look at America’s past—we ask ourselves where we are now and what we can do moving forward to ensure that Dr. King’s vision will be realized in our nation and around the world,” Diermeier said. “We must not lose sight of the imperative to continue our work for a more inclusive Vanderbilt and more just society.”

Chancellor Diermeier then introduced keynote speaker Dinaw Mengestu. Mengestu is an Ethiopian-American author, journalist and professor of creative writing. He immigrated to the U.S. from Ethiopia with his family at the age of two, and his books provide depictions of the immigrant experience in America. Mengestu was named a MacArthur fellow in 2012, among other honors.

Mengestu began his talk by providing his insight into the events of the past two weeks in the context of MLK’s legacy. Per Mengestu, nothing has changed in our country in a dramatic or unseen way in the past two weeks, and what is evident now has always been evident to the world—the mistrust and the bigotry.

“The only difference now is that it is not masquerading as something else,” Mengestu said. “The man in the Viking hat was not in costume anymore than the man carrying the Confederate flag through the halls of the Capitol. Both were, in that moment, exactly who they always claimed and said to be. The only difference now was that they had stripped themselves of the veneer of good, law-abiding citizens concerned with the integrity of a constitution.”

Mengestu then reflected upon his own personal experiences as an immigrant in America. He started by explaining how exceptionalism is one of the reasons that his parents, like countless other immigrants, came to America.

“America, to them, was exceptional, not because it was perfect,” Mengestu said. “They had never experienced American racism first-hand and had followed the course of the civil rights movement with a mixture of awe and horror. They came anyway, roughly a decade after MLK had been murdered, because they suspected that it was still possible to recreate the very thing they were going to lose in exile—a home, or some version of it.”

Mengestu also reflected on his experiences as the only Black family who had stepped into the southern Baptist church in his town. His parents learned the rituals and language of a new American faith and, in turn, the members of the church learned what it was like to have them in their midst.

Mengestu later found out that the pastor had made calls to the members of the church to make sure that they treated his family kindly. No one at the church would have said they were racist, and most would be offended if it were suggested that they were racist because they were good people who did good things, per Mengestu.

“People had to be compelled or perhaps even threatened into decency,” Mengestu said. “Which of course makes for a much less heart-warming story of an immigrant family finding their home in America. Any ideas they may have had about the superiority of one color, country, ethnicity or nationality over another were marginal in light of that goodness.”

“What happened this summer after the loss of so many Black lives was this brief flickering recognition that institutional violence, which in any other country would have been branded as state-sponsored violence, wasn’t a myth,” Mengestu said.

“The so-called American Dream is little more than a catalog of things you can buy,” Mengestu said. “Of course there are no white picket fences or two-car garages in Dr. King’s dream. It’s a dream of equity—of justice—and it is that dream that compels every immigrant, migrant and refugee to come here.”

Mengestu shifted his talk to American exceptionalism and immigration policies at the beginning of 2017. Mengestu said that the southern border wall along with general discriminatory policies against immigrants were intended for those on the American side of the border.

“The primary function is to make America small again, diminish its potential and possibility and continue to define it along racial, ethnic and religious lines,” Mengestu said.

Mengestu ended his keynote with the words of Dr. King.

Mengestu’s keynote talk was followed by a Q&A moderated by Karla M. McKanders, Clinic Professor of Law and Associate Director of the Immigration Clinic at Vanderbilt. McKanders has focused on the intersection of immigration law and social justice in her scholarship.

During the Q&A session, Mengestu provided his advice to students who want to speak up and share their beliefs in a productive way to become a catalyst for change. Per Mengestu it is important for students to recognize the complexity of injustices and view them under a more complicated light.

“My sense for them is to look really closely at the injustices that are immediately around us to try to understand the layered ways in which they operate,” Mengestu said. “That we look at the present moment and break it down by pulling apart the different layers and understand it not just as an experience that is happening now, but as a historical experience. We need to figure out how we weave a more complicated narrative of any injustice that we see right now.”