After a nearly two-week hiatus due to COVID-19, the Commodores will take the court again this Sunday against Mississippi Valley State. 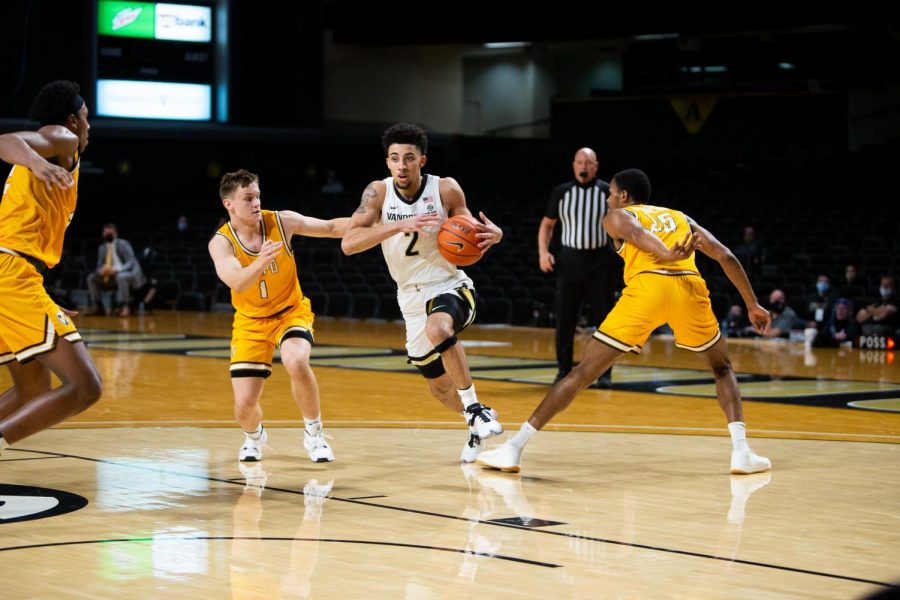 After just one game, the Commodores were forced to withdraw from the Legends Classic at Mohegan Sun, and just a week later, games against SMU and NC Central were cancelled as well.

Thanks to numerous high-profile storylines on West End, Commodore basketball was moved to the back burner of Vanderbilt athletics. But Stackhouse’s group will return this Sunday to face Mississippi Valley State after their two-week hiatus.

Despite a perfect 1-0 record resulting from their opening night victory over Valparaiso, Vanderbilt was forced into quarantine following an underwhelming performance on Nov. 27. The 77-71 win exposed the potential weaknesses of this team and left a sour taste for Commodore forwards DJ Harvey and Dylan Disu, who struggled to find any rhythm in their season debuts.

The cancellation of four non-conference contests has put a squeeze on the Commodores’ schedule. With just four games remaining before their Southeastern Conference (SEC) opener on Dec. 30 against the 3-0 Florida Gators, Vanderbilt has to take advantage of every opportunity they are given to improve.
A sloppy win
The Commodores looked like a team that had never taken the court together in their season opener, and the theme of the game was turnovers. Vanderbilt turned the ball over on nearly 26% of its possessions and tallied 19 total turnovers, more than any single game all of last season.

These turnovers were the result of a team that looked sluggish. Cuts weren’t crisp. Screens were mistimed. The ball continuously got stuck on the wings with little off-ball movement. A combination of careless inbounds passes, sloppy dribble moves and silly off-balance offensive fouls also helped Valparaiso score 20 points off Commodore turnovers.

Many of these pitfalls will be corrected with time. Stackhouse’s system relies on incredible attention to detail. The timing of screens and the precision with which plays are run enable them to be successful. And as his team continues becoming more comfortable with this system, they will find more consistent success.

Five of the Commodores’ turnovers came from Scotty Pippen Jr. Nonetheless, he was the clear catalyst behind the Vanderbilt offense, racking up 25 points, four assists and three steals. The most impressive aspect of Pippen Jr.’s performance was his ability to create shots for others.

Without the downhill presence of Saben Lee, both Pippen Jr. and Max Evans will be charged with helping the Commodore offense play from the inside out. By getting feet in the paint, Pippen Jr. and Evans were able to collapse the Valparaiso defense and kick to open shooters.

But those shooters did not find much success in the Commodores season opener. The team shot just 40% from the field, and Disu and Harvey shot a combined 5-14 on the night.

Throughout the preseason, Stackhouse proclaimed Disu and Harvey as the Commodores’ leading offensive options alongside Pippen Jr., but both looked far too passive against the Crusaders. Harvey is a player who can create his own shot from just about anywhere on the floor but failed to do so in his Commodore debut. He consistently looked flat-footed and came up short on a number of three-point tries.

Stackhouse played over ten lineups against Valparaiso, a common trend for a coach with several new players, especially against a mid-major opponent. Unfortunately, with the changes to Vanderbilt’s schedule, Stackhouse will not have much time to experiment with lineups. It will be important for him to round out a consistent rotation before SEC play arrives.

One of his biggest rotation decisions will come in the frontcourt. Transfer Quentin Millora-Brown started in his first game as a Commodore, while fifth-year senior Clevon Brown was the second player off the bench.

Millora-Brown, Brown and Ejike Obinna split duties at the center position almost evenly, with all three playing about 12 minutes. None of the Commodores’ centers stood out against Valparaiso, each doing a few good things in limited action.
COVID-19 Implications
Sixteen days in between games is not ideal for a young team. Relying on multiple transfers and freshmen to contribute meaningful minutes demands significant game action to develop chemistry, and unfortunately, the Commodores will not exactly have that luxury.

With a current maximum of five non-conference games before their SEC slate, there is very little time for Stackhouse’s team to make the adjustments it will need to be ready for the Florida Gators on Dec. 30.

However, the Commodores have three things going for them as they prepare to return from their time off. First, they will be facing a Mississippi Valley State team that lost to Arkansas by 80 points just two weeks ago. Yes, 80. The Delta Devils also rank dead last in Division-I according to KenPom.com.

Second, programs around the country, especially in the SEC, have had their own struggles with COVID-19 and cancellations. Eight other SEC programs have had at least one cancellation, while Tennessee, Ole Miss and Florida have missed multiple contests.

And third, there is a chance freshman guard Tyrin Lawrance may be back in the near future. The former three-star recruit has been battling a groin injury throughout the preseason but would add a much-needed gear to the Commodores backcourt. With an extremely quick first step and knack for getting to the rim, Lawrence would add a burst of speed to Stackhouse’s lineups.
It just means –
It has not been a football-caliber start for the men’s basketball teams of the SEC. After having only two ranked teams in the preseason AP top 25, Tennessee remains the sole representative for the conference, having played just a single game.

Record-wise, head coach Eric Musselman and the Arkansas Razorbacks have set the pace, jumping out to 5-0, beating five mid-major teams by an average margin of 36 points. Despite losing an All-SEC backcourt featuring Mason Jones and Isaiah Joe, the Razorbacks have retooled and are led by dynamic freshman guard Moses Moody.

Kentucky has not only been the largest disappointment in the SEC but also in the country thus far. With just a 1-3 record that includes an ugly 17-point thumping at the hands of a 2-2 Georgia Tech team, Coach Calipari has been unable to blend his roster that is full of young talent and transfers.

Preseason All-SEC selections Olivier Sarr and Brandon Boston Jr. have shown flashes of their potential but have been unable to play a winning brand of basketball early in the season. Calipari’s team also continues to struggle from beyond the arc, where they are shooting an abysmal 17-66 (25%) in four games.

There is no doubt the Wildcats still have incredible talent, but it may take them most of this season to hit their stride. The Commodores will travel to Lexington for their second SEC game on Jan. 5. Facing Kentucky earlier in the season may actually be a good break for Vanderbilt as Calipari and the Wildcats continue searching for answers.