The Hustler Sports 30 crew is joined by Sarah Fuller to talk soccer, football and more. 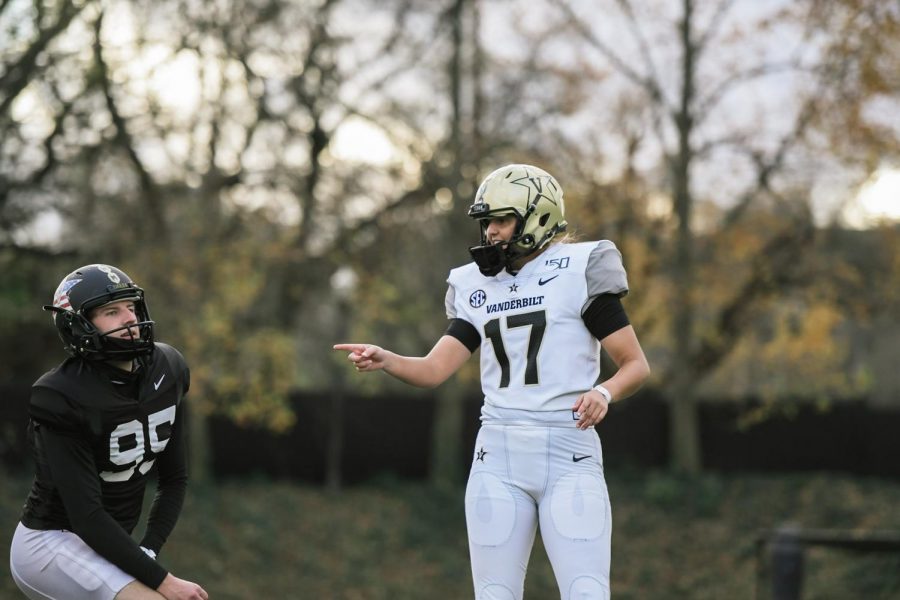 Sarah Fuller practicing with the Vanderbilt Commodores ahead of Saturday's contest with Missouri. (Hustler Multimedia/Truman McDaniel)

On this week’s episode of the Hustler Sports 30, Simon, Betsy Goodfriend, Alyssa Muir and Justin Hershey are joined by Sarah Fuller to discuss everything from soccer season, to her experience walking on—and playing—in last week’s football game and a potential kicking competition brewing on West End.

2:21 — Justin asks Sarah how she stayed ready throughout the soccer season, despite not being named the starting keeper when the season began.

4:40 — Alyssa asks Sarah about Darren Ambrose, who has been a very outspoken supporter of her football endeavors, and how he prepared her for her football debut against Missouri.

5:46 — Betsy asks how she prepared for Missouri, knowing she was the only active kicker traveling to Columbia.

6:30 — Alyssa asks what her debut meant to her and what some of the coolest reactions have been.

8:40 — Simon asks about her critics and whether she ever felt unwelcome as a member of the football team.

9:48 — Betsy asks how Sarah stays focused despite the national spotlight.

11:00 — Simon asks Sarah how she sees herself competing or splitting duties with Ryley Guay if he is able to play come Saturday.

11:57 — Simon wraps up the interview by asking Sarah how she’s improved since she first starting kicking a week ago.

14:00 — The crew recaps Vanderbilt soccer’s SEC Tournament title and how important the win was for the program.

19:40 — One game through the season, the hosts break down Vanderbilt basketball’s sloppy win over Valparaiso in the season opener.

25:40 — The hosts discuss whether or not it’s realistic to think the SEC basketball season will go as planned.