The Hustler will continue to update this story with news on Fuller and her debut. 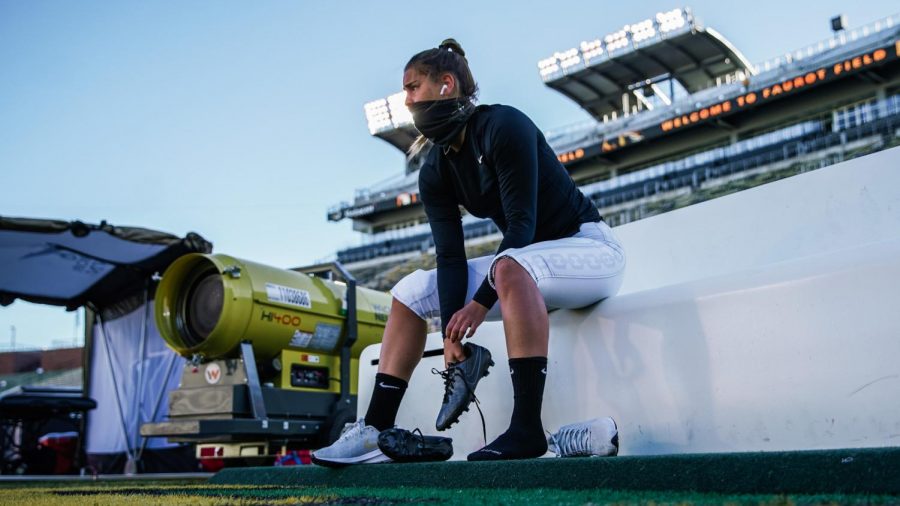 Sarah Fuller laces up her cleats prior to Vanderbilt's Nov. 28 contest at Missouri. (Vanderbilt Athletics)

Editor’s Note: The Hustler reported on Nov. 24 that Sarah Fuller, Vanderbilt soccer’s starting goalkeeper, practiced with the football team as a kicker. Fuller then confirmed in a Nov. 27 tweet that she was dressing for Saturday’s contest against Missouri. Last updated on Saturday, Nov. 28.

Sarah Fuller, Vanderbilt soccer’s starting goalkeeper, became the first woman to log a snap in a Power Five football game on Nov. 28 as the Vanderbilt Commodores faced the Missouri Tigers.

Fuller, a senior goalkeeper from Wylie, Texas, made her first start for the soccer team against South Carolina on Oct. 11, 2020 and held the starting position through the Commodores’ SEC Tournament title on Nov. 2. The Hustler reported on Nov. 24 that Fuller practiced with the football team as a kicker, and she made her first appearance in the second half as she kicked off to the Tigers.

After the offense failed to get within field goal range in the first half, all eyes were on Fuller and the Commodore special teams unit to start the third quarter. Vanderbilt received possession to start the game, so the Commodores would eventually have to kickoff to start the second half—the only question was whether they would use Fuller as their kicker.

In the end, Mason did opt to roll out Fuller on the ensuing kickoff, making her the first woman to log a snap in a Power Five football game. Fuller booted the ball 30 yards to the opposing 35, and the Missouri Tigers did not return the kick.

Sarah Fuller is the first woman to log a snap in a Power Five football game.

Her second half kickoff travels to the opposing 35 with no return.

Fuller did not make another appearance following her second half kickoff.