2020 has been a rollercoaster for the Vanderbilt Commodores, who finished the regular season just 4-4. But four straight decisive wins earned them their first SEC Tournament title since 1994. 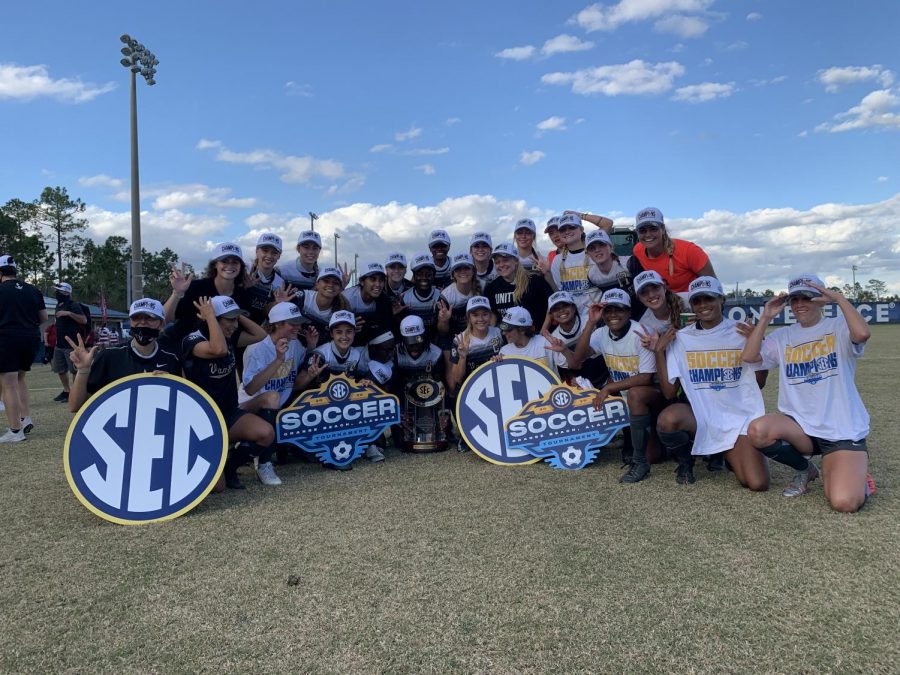 But everything in between Vanderbilt soccer’s opening day, come-from-behind, 3-2 win over Kentucky on Sept. 20 and its Southeastern Conference (SEC) Tournament Championship on Sunday afternoon—no one could have written that script. And that’s what makes Vanderbilt’s 3-1 win over Arkansas, the program’s first SEC Tournament title since 1994, so special.

Once upon a time, well before Vanderbilt was labeled the seventh seed in the 14-team SEC tournament field, placing them firmly in the middle of the conference, essentially writing them in as the mediocre team they look nothing like, they entered the season with high expectations.

And at the outlook of the season, the conference agreed. The Commodores were ranked fourth of 14 teams in the preseason SEC preseason coaches poll, trailing only Arkansas, South Carolina and Texas A&M. They deserved to be that high, if not higher, coming off an SEC Eastern Division title in 2019, an SEC Regular Season championship in 2018 and stringing together a 43-16-5 record in the past three years.

Under the tutelage of head coach Darren Ambrose, the Commodores have reached new heights. But in the 2020 regular season, they reached a new low.

After the win over Kentucky, Vanderbilt lost and lost and lost to Tennessee and Missouri and South Carolina. Even after they rebounded with three-straight wins, their regular season concluded in heartbreaking fashion: a 2-1 overtime loss to Ole Miss, their fourth overtime game in eight total matchups, at home, on senior night.

Their 4-4 record gave them a seventh seed in the SEC Tournament, but they rallied. Despite only winning four regular season games, they won four more—consecutively—over tenth-seeded Mississippi State, second-seeded Tennessee, third-seeded Texas A&M and finally, top-ranked Arkansas in the SEC tournament.

Fittingly, Sunday’s championship matchup, much like Vanderbilt’s season, served the Commodores plenty of adversity. On a sunny, mid-November day in Orange Beach, Alabama, Vanderbilt took the field in a 3-5-2, the same starting lineup it has used throughout the SEC Tournament, and Arkansas in a 3-4-3.

Before the Commodores could even break formation, they conceded.

46 seconds through the contest, in the game’s first minute, Arkansas had a great look on-goal—and while the first shot was deflected, the second, courtesy of Kayla McKeon, was hardly even contested.

One minute, one goal. It's the Arkansas Razorbacks taking an early lead courtesy of Kayla McKeon.

Vanderbilt could have rolled over and accepted defeat after the early Razorback goal. But to this Vanderbilt team, adversity is nothing.

Minutes later, senior forward Haley Hopkins, the heart and soul of the Commodore offense, the leader who, since her freshman campaign in 2018, has propelled Vanderbilt in times of desperate need, did it again. Working out wide of the box, Hopkins put a move on a Razorback defender, running parallel to the goal, and drew a foul inside the box.

Haley Hopkins puts a quick move on the Arkansas defender and draws a foul. Kimya Raietparvar will take the penalty.

For the second time this tournament, sophomore Kimya Raietparvar stepped up for the penalty kick and put it away with ease. Vanderbilt, in the third minute, had equalized the score at one apiece.

The early burst of scoring didn’t end with Raietparvar. The Commodores were far from finished—in the fifth minute, senior midfielder Leila Azari sent a perfectly-timed cross into the box, and junior midfielder Raegan Kelley headed the ball home for her third goal in as many tournament games.

Leila Azari sends a perfect cross to Raegan Kelley, who puts it away to give Vanderbilt its first lead of the contest. Kelley has three goals in the past three games.

From thereon out, Vanderbilt’s 2-1 lead would prove to be enough. The Commodores nearly conceded once more in the first half, but it was Raietparvar, again, who came to save the day.

A mental lapse in their own third saw the Commodores gift Arkansas with a perfect chance to equalize in the 30th minute. With goalkeeper Sarah Fuller out of position, the Razorback attacker merely had to beat the feet of Raietparvar.

But Raietparvar’s split at the line saved Vanderbilt from any further damage.

Vanderbilt gifts Arkansas with a perfect opportunity due to a mental lapse in their own third, but Kimya Raietparvar saves the day.

Raietparvar now has a goal off the PK, and another goal saved.

A fitting way to go out, sure. But in the 54th minute, freshman midfielder Abi Brighton for the second time in a week delivered the dagger. Her first, which ranked third in the SportsCenter top-ten, could hardly hold a candle to this one.

After a rebound went back outside the box, Brighton launched a rifle of a shot back at the goal. The shot beat the goalkeeper and went bar-down for her second goal of the tournament, second goal of her career and certainly, second time on the SportsCenter top-ten.

🗣️ Rebound Bosh
🗣️ Back out to Allen
🗣️ BAAAAANG

Are you kidding me Abi Brighton?! Her second career goal is ANOTHER @SportsCenter #SCTop10 nominee.

By then, all Vanderbilt needed to do was hold onto its 3-1 lead.

That wasn’t a problem for the Commodores, who time and time again have turned pressure into diamonds, adversity into opportunity and underdog status into best-in-show designation.