The seventh-seeded Vanderbilt Commodores continued their historic run toward the SEC Championship on Thursday with a 3-1 victory over the third seeded Texas A&M Aggies. 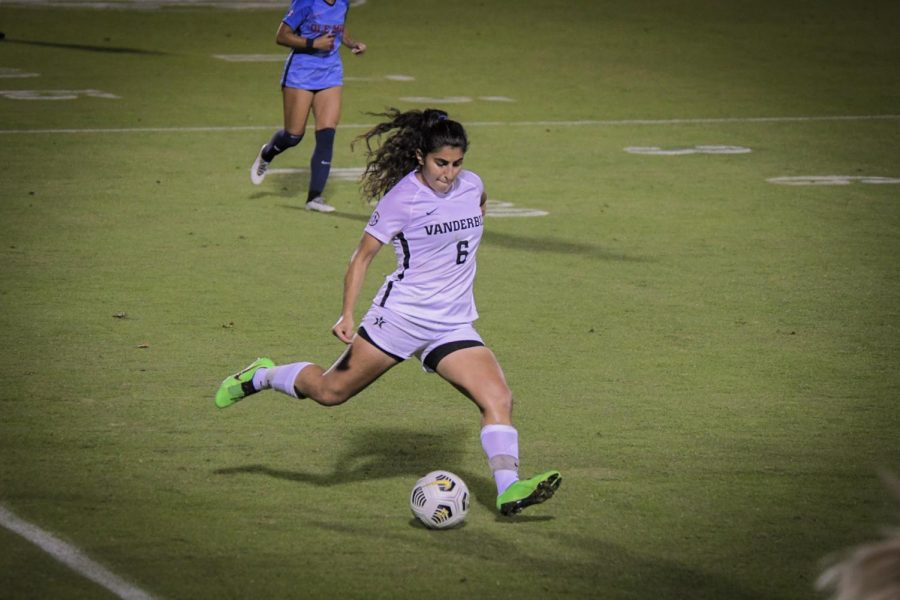 In a three game run that has featured dominant play across the board from Darren Ambrose’s team, the Commodores have outscored their opponents 11-3 and Thursday was no different.

Despite not scoring in either of her team’s SEC victories, Haley Hopkins led the Commodores to victory thanks to two dynamic goals and a constant barrage of shots on the Texas A&M net.

For the third straight game, the Commodores got on the board first. They were certainly the aggressor early and registered three shots on goal in just the first half, with two coming off the foot of SEC legend Hopkins.

After a slow first 23 minutes, Hopkins ignited the Vanderbilt sideline with her first goal of the 2020 SEC tournament. She took it nearly half the field herself, made a final move on an Aggie defender, and fired it to the left corner of the net with her explosive right foot.

Haley Hopkins takes it the distance!!! The senior goes half the field and puts it in the back corner of the net to give the Commodores the lead.

As expected, the Aggies did not go away. Despite numerous impressive defensive plays from the Commodores’ backline, Texas A&M midfielder Kate Colvin scored her first career goal with 12 minutes remaining in the first half. After Vanderbilt’s Kimya Raietparvar tripped fighting Colvin for the ball, the Aggies’ freshman finished off the goal with a shot that barely eclipsed the outstretched hand of Commodore goalie Sarah Fuller.

The teams proceeded to trade possession down the stretch of the half. Despite two set pieces with four minutes remaining in the half off of an Aggie foul and hand ball, Vanderbilt was unable to capitalize heading into the halftime break.

The second half began much like the first did: with stout defense from both sides. With timely deflections and impressive clearances, SEC co-defensive players of the year Jimena Lopez and Karlina Sample made their presences felt early in the half for the Aggies.

The Commodores continued adding to their shot tally that totaled 12 on the evening, but failed to find the net off numerous shots from Hopkins and Abi Brighton.

The Aggies endured plenty of sloppy plays that helped keep the Commodores in the game down the stretch. Between multiple yellow cards and a critical offsides penalty that cost them a goal, the teams remained tied at one with just fifteen minutes remaining. Then, Haley Hopkins did it again.

Off a beautiful feed from Azari, Hopkins added to her storied SEC career with her second goal of the game. With a header off a cross, Hopkins buried it to give the Commodores the lead they needed to close out the Texas A&M Aggies.

SEC LEGEND Haley Hopkins once again!!! A beautiful header off of a feed from Leila Azari gives the Commodores the lead!

But to top things off, four minutes later, Raegan Kelley added to the Commodores lead. Off of a messy corner kick, Kelley stuffed the Commodores third goal of the game in the bottom left corner of the net. And for the first time all year, the Texas A&M Aggies surrendered three goals in a game.

ANOTHER ONE! Raegan Kelley off of the messy corner kick gives the Commodores insurance. For the first time all year, Texas A&M has surrendered three goals.

After three explosive victories, the Commodores have earned the right to face the number one seeded Arkansas Razorbacks in the SEC championship on Sunday at 1 pm looking for their first SEC Tournament Championship since 1994.