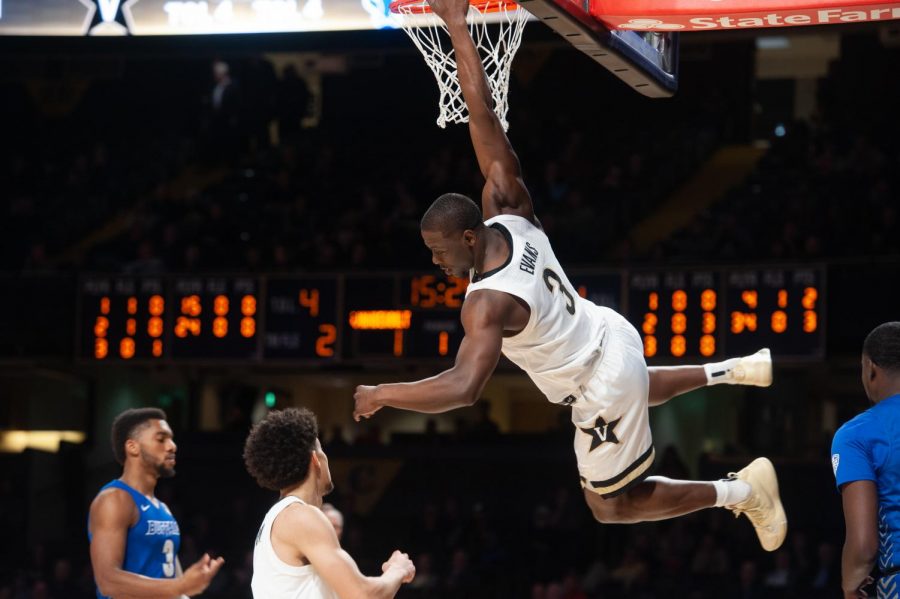 Maxwell Evans hangs on the rim after a dunk against Buffalo in 2019. (Hustler Multimedia/Brent Szklaruk)

Jerry Stackhouse enters his second season as Vanderbilt Men’s Basketball’s head coach looking to build on the progress his first recruiting class showed towards the end of last season. After an 0-8 start in conference play, Vanderbilt beat 18th-ranked LSU and closed regular season play with consecutive wins over Alabama and South Carolina. Though the losses of Aaron Nesmith and Saben Lee leave this year’s team without their top two scorers from last season, Scotty Pippen Jr., Dylan Disu and Jordan Wright all played significant roles and improved as freshmen last season. Coupled with the debuts of transfers DJ Harvey and Issac McBride, Vanderbilt should have more depth this season than in prior seasons, when injuries to Darius Garland and Aaron Nesmith ruined Vanderbilt’s hopes in the SEC.

Coach Stackhouse and the Commodores are looking to end their two-year streak of finishing last in the SEC, which had not previously happened in program history. Vanderbilt released their full schedule for this season earlier this week, and here are some key facets of the schedule.

The format for Vanderbilt’s conference schedule is the same as any normal season this year. Vanderbilt will play each of the other 13 SEC teams once, and also will play an additional game against Tennessee, Florida, and Kentucky. Tennessee and Kentucky are two of the top teams in the SEC, which means Vanderbilt will have a tougher schedule than most of their SEC counterparts. A potential competitive disadvantage might exist for Vanderbilt if fans are not allowed to attend home games at Memorial Gym, which is the current attendance plan for the start of the season.

UConn finished 5th in the American Athletic Conference with a 19-12 record during Dan Hurley’s second year as head coach. Like Vanderbilt, UConn lost its top scorer from last season in Christian Vital. As a result, this will be an early test for both teams as they sort out who will be their scoring leaders in the new season. For Vanderbilt, this game should show how prepared they are to face the strong competition that they will meet in conference play later in the season. During a press conference last week, Coach Stackhouse initially said UConn had pulled out of the Legends Classic, but then said they had not officially pulled out. As of November 19th, this game is still scheduled, but it could be cancelled due to COVID-19 related problems.

Vanderbilt did not catch any breaks with the start of their SEC play, including their second game in Lexington. Like all years, Kentucky Coach John Calipari has a strong recruiting class, as five-star prospects Brandon Boston Jr. and Terrence Clark headline the No. 1recruiting class in the country. This will likely be the most talented team that Vanderbilt faces during the season, so remaining competitive in this game would bring a lot of hope for how they should fare in the SEC. There have been some seasons when Coach Calipari’s teams have gotten off to rocky starts as their coaching staff tries to coalesce so much individual talent, so Vanderbilt might benefit from catching them at the beginning of the SEC slate.

While Stackhouse has shown promise as a recruiter—he already has commits from four-star prospect Gabe Dorsey and three-star prospect Peyton Daniels for the class of 2021—Vanderbilt will not be able to seriously compete with Tennessee and Kentucky until it is able to recruit top in-state talent. Head coach Rick Barnes has rebuilt Tennessee’s program, going 105-64 in his five seasons there. Barnes’ fourth-ranked recruiting class includes five-star prospect and Tennessee native Keon Johnson. For Coach Stackhouse to really compete within the SEC, a prospect like Johnson is the kind of high schooler that he needs to beat out Rick Barnes for. In order to do so, beating Tennessee, especially at home when Coach Stackhouse will likely have his top recruits in attendance, is part of changing the narrative of Vanderbilt in the eyes of recruits.

As mentioned, Vanderbilt’s opening slate of SEC competition is not favorable with their first five games being Florida, at Kentucky, home against Mississippi State, atMissouri and  at Tennessee. As a result, a key stretch for the Commodores will be their five games immediately following this tough start. From Jan. 20-Feb. 3, Vanderbilt plays Texas A&M twice, hosts Arkansas and South Carolina, then travels to Florida. This is the easiest stretch of their SEC schedule, and it will be imperative for them to take advantage in order to rebound after what will likely be a 2-3 or 1-4 start within conference play to begin the season. Gaining momentum against these weaker opponents could vault Vanderbilt towards the top of the SEC standings as it enters the second half of the season.