Vanderbilt women’s basketball is trending in the right direction. Here’s a look at what their 2020-21 schedule presents. 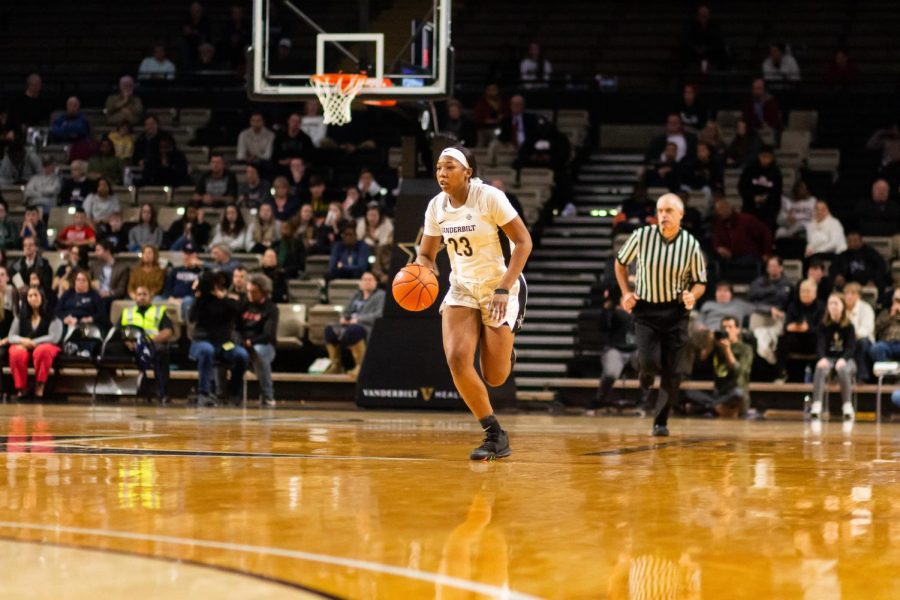 Koi Love takes the ball up the court against UConn in 2019. (Hustler Multimedia)

In the 2019-2020 season, Vanderbilt women’s basketball finished with an overall record of 14-16 (4-12 in SEC play). Although this is not the best record, Commodore fans can be hopeful seeing that the team is trending upward.

Coming off of the 7-24 record of the 2018-2019 season, the women showed significant improvement. For most of last season, the team missed the scoring and elite playmaking skills of forward Brinae Alexander, but still managed to finish with a positive record; a record significantly better than the 2018-2019 season. The improvement, and compensation for the loss of Alexander, was due to the work of center Mariella Fasoula and star freshman Koi Love.

However, the 2019-2020 season followed the similar trend as the past season : after the Commodores thrived with a 10-4 record in the non-conference, they managed just 4-12 in the SEC . Due to the presence of the COVID-19 pandemic, this pattern is likely to be exacerbated. Rather than a 30-game slate this season, there are only 25 contests, a decrease mostly  from non-conference play. This means that the Commodores will have fewer easy-win games and more challenges.

With the departure of Fasoula, there are only two seniors on the team. However, the outlook of the upcoming season is not all grim.  The Commodores return Alexander off injury, Jordyn Cambridge will continue to be a defensive and play-making force at point guard, and a star-studded sophomore class that will build off the experience that they gained from freshman year. The Commodores also added 6-foot-6 freshman, Emily Bowman, out of Huntsville, Alabama who will look to fill the role that Fasoula left.

Overall, Vanderbilt women’s basketball is likely to continue their upward trajectory that they have shown since the 2018-2019, although it might not present itself through their overall record. This past week, the team released their 2020-2021 schedule in which, similar to last season, they have a fairly easy non-conference schedule, followed by multiple top-20 teams when SEC play begins.

Like last season, the Commodores will likely cruise through non-conference play. Of their eight non-conference games, only one of them is against another Power Five school: Texas Tech. However the Texas Tech women’s basketball has been mediocre in comparison to the rest of the Big 12. In fact, Vanderbilt is currently ranked higher nationally, by eight positions, than Texas Tech is. This game will probably be one of the few on the non-conference schedule that will  present a significant challenge to the Commodores, in addition to the season opener against Middle Tennessee State, who might not be a Power Five team, but is ranked 46th nationally.

However, this moderate non-conference schedule will give Coach Stephanie White the opportunity to give her heavily underclassmen team valuable experience playing at the college level before the transition to SEC play.

Although non-conference play will be moderate for the Commodores, conference play is where they will face a steeper challenge. Of the top 15 AP poll teams going into the season, four of them are in the SEC, the most of all Power Five conferences. With a slightly shorter conference season due to COVID-19, the Commodores might have some trouble maintaining the upward progress that they displayed last season. There are fewer non-conference games, so the season’s record will be heavily based on SEC performance. With the caliber of the SEC this year from top to bottom, this conference stretch of play will be a particularly difficult stretch for the Commodores in which Coach White will rely heavily on her experienced players.

As mentioned before, Vanderbilt’s most important and difficult games will come during SEC play. One game in particular, a Jan. 14 matchup with the University of South Carolina, is probably going to be their biggest and most interesting game.  Similar to last year’s home game versus UConn, South Carolina enters the season as not only the top team in the SEC, but also the top-ranked team in the country. Coming off an NCAA Championship in 2017, in addition to three Sweet 16 appearances, one Elite Eight, and one Final Four in the past five years, the University of South Carolina is a household name in women’s college basketball, and consistently one of the best teams in the country.

This game has the potential to be a very interesting one considering Vanderbilt’s growth over the past years. The Commodores have consistently trended upward and have the slight chance of being the newcomers who challenge Goliath.

Shortly thereafter, the Commodores will take on their in-state rival, the University of Tennessee, on Feb. 14th in Knoxville. This is an annual game that every year has the potential to become a classic game. The two universities are rivals in every sport, and although Tennessee had Vanderbilt in the past under Pat Summitt, the Commodores are now consistently keeping the games much more competitive. In last year’s season, the rivalry game was close until the final five minutes, in which Tennessee pulled away. However, with the experience from last year, this year the Commodores are far more likely to be able to hold on.

As stated, league play is likely to be the Commodores’ toughest challenge in the upcoming season. Furthermore, within this league play there is a specific two-week span in which the Commodores will face some very tough battles. From Jan. 17 to Feb. 1, the Commodores face Kentucky, Tennessee, Arkansas and Mississippi State consecutively. That is four of the top six teams in the conference within a 16-day period. This is likely to be a very difficult stretch for this Vanderbilt team, even with the star-studded sophomore and junior classes. Although this is going to be a challenging two weeks for the Commodores, it will give Coach White the opportunity to see how her team responds to adversity, and judging from the progress within the past two years, this team appears poised to fight through these two weeks and use them as a learning experience that will lead to future success.