Vanderbilt soccer opened its postseason slate with a dominant win over Mississippi State. 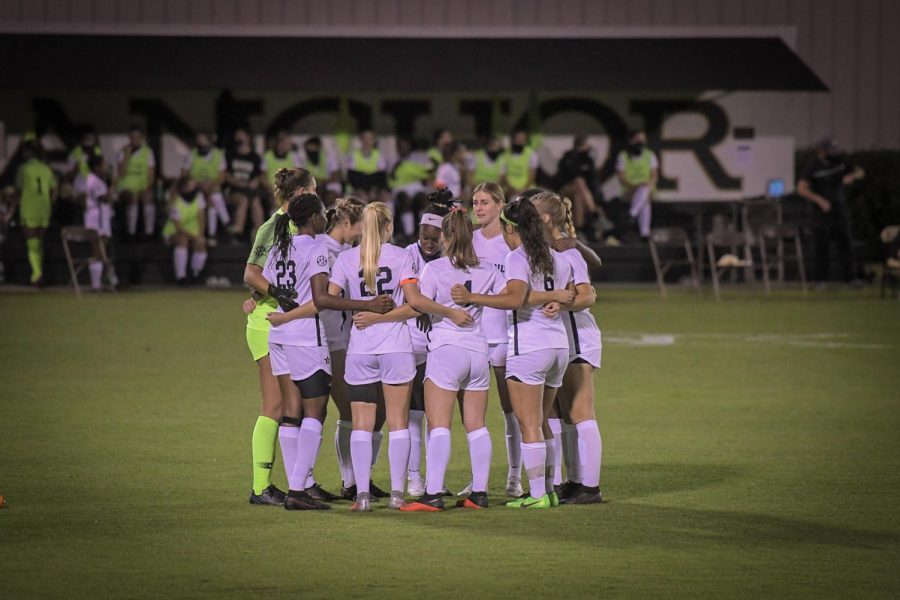 It could have been the same Vanderbilt team on display throughout the 2020 season. The same Commodore roster that’s practically overflowing with talent, as four players were named to all-conference teams in 2020: Haley Hopkins, a first team All-SEC forward; Maddie Elwell, a second team All-SEC midfielder; Ella Shamburger, a second team All-SEC defender and Abi Brighton, a midfielder named to the SEC All-Freshman team. And yet, that Vanderbilt team, slated to make noise in 2020, struggled mightily. They went just 4-4 in the regular season, with mental errors costing them one too many goals, far too many times.

But what transpired in Vanderbilt’s 4-0 win over the Bulldogs couldn’t have looked more different than that team. No—Sunday’s performance looked a lot more like the Commodores of years past; the team that amassed a 43-16-5 record in the previous three seasons, showing flashes of dominance, winning the SEC regular season crown in 2018, followed by the SEC eastern division title in 2019.

All year, Vanderbilt wanted nothing more than to return to that form. And finally, it culminated in a first-round, postseason thrashing at the expense of the Mississippi State Bulldogs.

It began with an early-game goal—something Vanderbilt has had difficulty with in 2020—courtesy of a Mississippi State own goal. In the eighth minute, Shamburger whipped a set piece from roughly ten yards outside the box right on target. The Bulldogs, trying to stop Vanderbilt’s attack, inadvertently struck the ball into their own net.

Ella Shamburger whips in the free kick and the Miss. St. defender knocks in an own goal to give Vanderbilt an early lead in Alabama.

That goal was a gift, sure. But the ensuing three were a result of Vanderbilt’s commanding play.

The Commodores were routinely keeping the ball in the attacking third, leading to plenty of opportunities to score. Their second goal came shortly after the first, in the 16th minute, when Brighton notched her first career goal in spectacular fashion.

Brighton held possession just outside the box and tried weaving a pass through the Mississippi State back line, but the Bulldogs stood strong, deflecting the pass back her way.

Unfortunately for Mississippi State, Brighton took the deflection in stride, rifling a one-time volley into the back of the net. From thereon out, it was all Vanderbilt.

WOW. How about that for a first career goal?

Abi Brighton with an absolute boot to give the Commodores a big lead early.

Freshman Sophia Gorski joined Brighton, scoring her first-career goal just over a month after making her collegiate debut, in the 41st minute. Sophomore Alex Kerr delivered a perfectly-executed cross to Gorski, who overpowered the accompanying Bulldog defender and tapped the ball past the keeper for Vanderbilt’s third goal of the game. The Commodores went into the locker room at halftime leading 3-0, but they weren’t finished.

That's freshman forward Sophia Gorski, who made her collegiate debut just over a month ago, scoring her first career goal off the assist from Alex Kerr.

Commodores finding their footing at the SEC Tournament.

Elwell, who had a spectacular game to begin with, added her first goal of the season in the 55th minute, using her pace to gain separation from the defender, then her flair to fool the Mississippi State keeper.

When it rains, it pours.

This time, it's Maddie Elwell burying her first goal of the season. The Commodores have a commanding lead over Miss. St in Orange Beach, Alabama.

In a dominant performance, the Commodores showed resolve, pouring in four goals for the first time this season. They now move onto the SEC Tournament semifinals, where they’ll face second-seeded Tennessee on Nov. 17 at 12:00 CST.