Despite an early lead and constant pressure, the Commodores found themselves on the losing side of their fourth overtime game of the season. They are now just 1-3 in those contests. 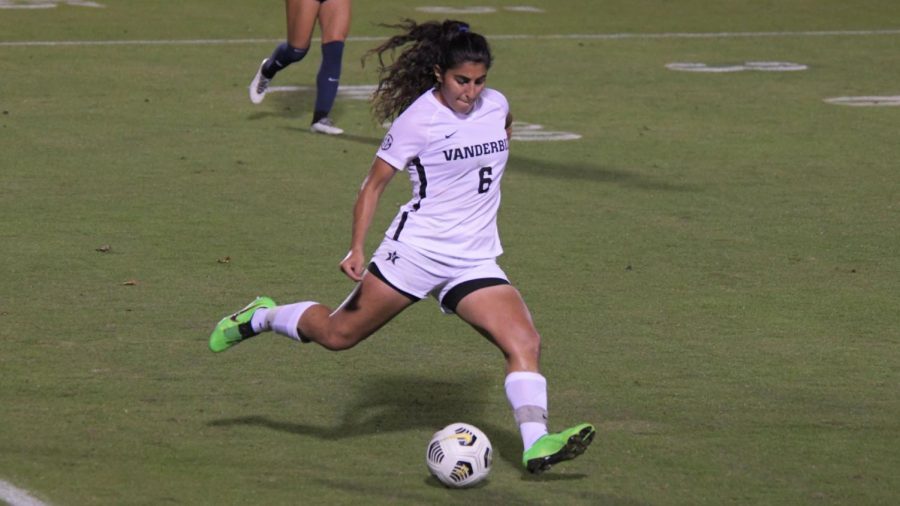 Leila Azari against Ole Miss in the final home game of 2020. (Twitter/Vanderbilt athletics)

Another game, another overtime thriller. Half of Vanderbilt’s games this year have gone into at least one extra period.

This was their last regular season game of the year, and it seemed like it would be a dominant senior night thanks to a ninth minute goal from Myra Konte. The 1-0 scoreline stood through nearly 86 minutes of the contest, but then, against the run of play, Ole Miss scored the equalizer. They pushed the game into overtime, where the Rebels found another goal quickly, finishing the match 2-1.

Vanderbilt’s lone score came early on, just nine minutes into the contest, from a corner kick. After an initial short clearance, the ball was served back into the box, where pandemonium ensued. The ball took a fortuitous bounce and ended up at the foot of Myra Konte, who scored on her senior regular season finale with a little help from a deflection in front of goal.

However, Ole Miss answered late, with an 86th minute goal from freshman Ramsey Davis, who found the ball at her feet and a wide open net in front of her after a bobble from goalkeeper Sarah Fuller on a high-arching cross from the right.

In overtime, it didn’t take long for another unfortunate turn of play to lead to a second Rebel goal. Just three minutes in, chaos in the box allowed senior Channing Foster to net the winning score, ending Vanderbilt’s hopes for a four-game winning streak.

Ranked at No.13 going into the game, Vanderbilt would have entered the SEC tournament red-hot and confident. The loss doesn’t end their season, but it won’t help their seeding. At the end of the day, it’ll ultimately be up to the team to decide if they let this loss sidetrack them going into the playoffs.

Throughout the match, the Commodores put constant pressure on the Rebels, shooting 14 times, with ten on target. The Commodore defense was especially impressive, as the only offense Ole Miss could generate for the majority of the game was from set pieces or shots from way outside the box. However, the floodgates gave way late and spoiled a clean sheet.

Vanderbilt was kept from adding a second in large part due to Rebel goalkeeping. Ole Miss goalie Ashley Orkus was stellar, saving all but one of the Commodores’ ten shots on target. Her most crucial save came on a breakaway chance for position Alex Kerr at the end of the first half. A goal there would have put the Commodores up 2-0 and given them momentum going into the break. Instead, Orkus added another save to her tally. If she hadn’t brought her “A” game tonight, the scoreboard could have told a much different story.

Still, for Vanderbilt, the backline of Myra Konte, Ella Shamberger, Maya Antoine and Madiya Harriott should be recognized for their performance. They created countless offensive chances and were stone-walling the Rebels until the last few minutes of the game. Leila Azari was another important contributor today, as she intercepted countless balls in the midfield, created chances from the wings and even got a shot off herself. However, this wasn’t enough to secure the victory.

“I think they just fought for it harder, and I think they were fitter. And that’s disappointing to be perfectly honest,” head coach Darren Ambrose said after the game. “They just ran over us in the second half.”

Vanderbilt finishes the regular season with a 4-4 record, but there is still hope for the Commodores, who will head to Alabama to compete in the SEC tournament on Nov. 22. Three of their four wins came in the last few weeks, so there is still momentum to work from for the team. However, they will not receive a first round bye with their seeding, and their road remains difficult.

Only time will tell if Ambrose and his squad can correct their season-long finishing woes and claim an SEC title.