Vanderbilt’s offense has seemingly been better in 2020, but they haven’t put points on the board to show for it. What gives? 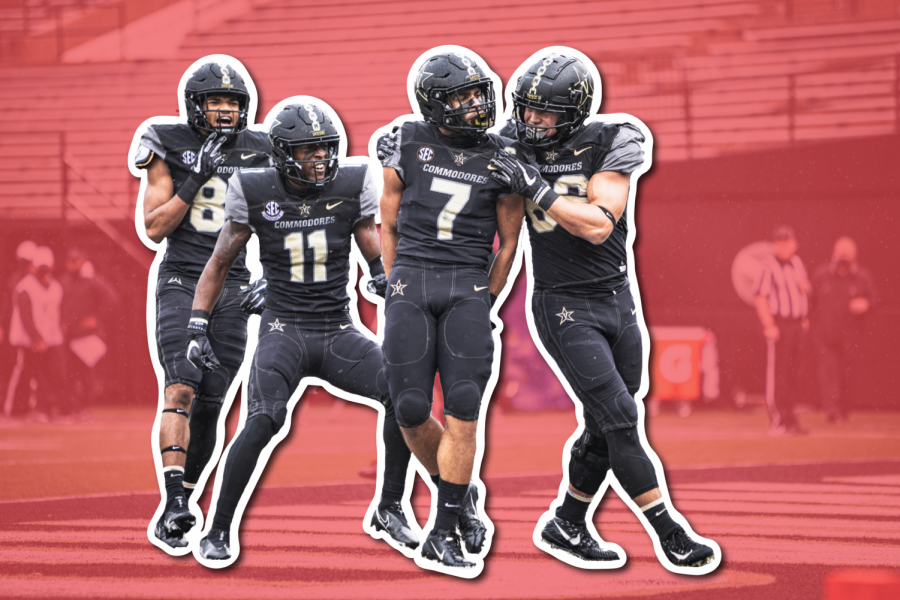 A two-week extended bye gave Vanderbilt coaches, fans and players some nice time off. For the Commodores, sitting at 0-3 on the season and coming off back-to-back 41-7 home losses, that time off was much needed. However, as head coach Derek Mason confirmed, there will be football this weekend in Nashville, as the Commodores will play host to the Ole Miss Rebels this Saturday.

While statistics show that the 2019 offense led by quarterback Riley Neal averaged more total yards through three games, that group had the benefit of lots of garbage time scoring in blowout losses at Purdue and against LSU. Yet still, Vanderbilt has averaged more first downs per game in 2020 than they did in 2019.

And this Vanderbilt offense has seemed to move the ball better between the 20-yard lines than last year’s unit, at least to the eye. Through three games, there have been more chunk plays and general cohesion from the offensive side of the ball than the 2019 squad. Quarterback Ken Seals has provided more spark to the passing unit than any Commodore quarterback did all of last year, and despite the loss of alpha Ke’Shawn Vaughn, the committee of running backs including Javeon Marlow, Keyon Henry-Brooks and Jamauri Wakefield have been productive for offensive coordinator Todd Fitch as well.

Put simply, the red zone offense has been putrid: through three games, the Vanderbilt offense has scored just three touchdowns. And to boot (ha), the kicking game might be worse thus far: the Commodores rank dead last in the country in field goal percentage at .250, which is .083 percentage points lower than the next-worst team. Overall, the Commodores are rated as the 98th most efficient red zone offense (out of 101) in the FBS, and last in the SEC, converting their opportunities at a .375 clip.

Mason further expanded during Tuesday’s press conference, “I think for us it’s about decision-making and efficiency. When you get down there [in the red zone], the thing is—things happen much faster. The defense plays much faster, and a lot of times you’re being pressured.”

With that in mind, here are three ways to ignite Vanderbilt’s red zone offense and get Fitch’s bunch to start punching the ball in for points.
Be Aggressive
Vanderbilt has already missed field goals of 22 and 29 yards this year. Backup punter-turned-kicker Pierson Cooke has been harped on enough, and I’m sure he has done everything he can to correct those mishaps during the Commodores’ two-week bye. The real question, in my opinion, is why Vanderbilt was settling for field goals from so close to the goal line.

The 29 yarder was defensible: Vanderbilt was facing a fourth and 9 in a still-tight contest with South Carolina. However, the 22-yarder against LSU on fourth and 4 right before halftime left many spectators scratching their heads.

For Derek Mason and Vanderbilt, it’s time to get a bit nerdy and embrace some modern-day football analytics and start going for it more on fourth down. According to FiveThirtyEight, over the past ten years, NFL teams have been successful on fourth down a whopping 51% of the time. This season, Vanderbilt has attempted just six fourth downs. Given the struggles of the kicking game, the lack of red zone success and the relative strength of the Commodores defense, Mason and Fitch should be creating more opportunities for this offense, and that starts with keeping them on the field for an extra down more often.
Get the Ball to Playmakers
Once the Commodores focus on staying on the field longer, the key will be to get the ball to their best players. Unsurprisingly, the three touchdowns for Vanderbilt this year have gone to the three most dynamic players in the Commodore passing attack: Amir Abdur-Rahman, Ben Breshnahan and Cam Johnson. All three were nice individual efforts, and the Vanderbilt offense should emphasize scheming up ways to get their best players the ball in space to help the red zone offense. Let’s take a look at each.

In the opener against Texas A&M, Vanderbilt threw a beautiful touchdown pass to pull within two of the Aggies late in the third quarter. The Commodores have a trips set to the wide side of the field, set up for Seals to roll out. He does just that, and Cam Johnson runs to the front pylon, while Abdur-Rahman runs to the back pylon. Vanderbilt also runs the third receiver across the field, creating a one-on-one matchup for both receivers. Seals put the ball in a perfect spot here, and Abdur-Rahman was able to get the separation needed for the score.

This play is probably the hardest to replicate for Vanderbilt because it took great protection, a good route and catch and a perfect ball from Seals. That said, drawing up plays in the red zone for Abdur-Rahman to be in a 1-on-1 matchup is a recipe for success. The wideout has been Vanderbilt’s best at catching contested balls this season. Moving forward, the Commodores should highlight Abdur Rahman’s abilities by running fade, post and corner routes. A good example is Chicago Bears receiver Allen Robinson, who is one of the best at catching contested balls in the NFL.

Like Abdur-Rahman, Breshnahan has also shown an ability to make tough catches in traffic and has the physicality to fend off smaller cornerbacks and safeties. Breshnahan has been a very solid tight end for the Commodore offense this year, nicely filling the void left by Jared Pinkney.

Here, Breshnahan lines up in the middle of another trips formation from Vanderbilt. He beats his man with an in-breaking route; Seals puts it right on him, and he secures the catch. Cam Johnson is used as a decoy here, as the safety is lulled by his post route over the middle of the field. Coach Fitch creates a one-on-one matchup for Breshnahan, which he wins against a talented LSU cornerback.

Getting the ball to the tight end in the red zone, or at all for that matter, was something Vanderbilt struggled with last season. After this TD catch against LSU, Breshnahan had five catches against South Carolina, and Vanderbilt should continue to get him the ball. At 6’4, 244 pounds, Breshnahan is the biggest matchup advantage, physically speaking, Vanderbilt has right now. The Commodores will want to get him the ball even more in the red zone if they want to improve their success.

Finally, we have Vanderbilt’s longest touchdown of the season, which was a result of a good scheme and great individual effort from Cam Johnson. Once again, we see Vanderbilt lined up in a trips formation here, with Johnson in the slot. The Commodores run an RPO (run-pass option) action, and Seals get the ball out quickly to Johnson, who’s running a curl route.

This is a play that Vanderbilt needs to run more, and one that is easily replicable. The RPO creates some initial confusion for the South Carolina defense, giving Seals space to make his read. Then, he makes a quick throw to Johnson, who makes three defenders miss with just a little bit of space. This play also alleviates pressure from the offensive line by getting the ball out quickly. Seals doesn’t have to make a complex decision, as his read is quick and easy to complete. And Johnson gets the ball in space, where he has been electric his whole career. For Vanderbilt to find better red zone efficiency, this is a recipe for success on all accounts.

Derek Mason agreed that the components showcased on Johnson’s touchdown against South Carolina were a key to continued success down close: “What you have to do [in the red zone] is quickly get through your reads. Everything is condensed, so the ability to get from option one to two to three has to happen quickly. You’ve got to let your eyes and feet take you to where you need to go. [Seals] looked much more comfortable with that last week, and he’s looked pretty sharp to start this week. And now, he’s got to make it come alive in the game.”
Mike Wright Package
Speaking of RPOs, Vanderbilt has a speedy quarterback that could make the concept even more successful in the red zone: Mike Wright. While this idea is not currently applicable, as Mike Wright was left off the depth chart ahead of their Halloween matchup with Ole Miss this weekend, Wright surely brings an added dimension to the Vanderbilt offense.

Seals has been an upgrade under center compared to last season’s options; however, he has struggled in the red zone, throwing two interceptions inside the 20 so far. I don’t propose that the starter Seals necessarily be taken off the field in the red zone completely, rather that Wright be used as a change-of-pace feature to ignite a stagnant red zone offense.

Wright is unique from Seals in that opposing defenses have to worry not only if he will hand off the football or throw it, but also if he will take off and run. This threat adds another dimension to Vanderbilt’s offense by opening up the running game—the Commodores have yet to muster a rushing touchdown.

Last year, quarterback Mo Hasan’s ability to keep the defense honest with his rushing led to the Commodores’ only SEC win of the season over Missouri. This year, Coach Fitch could use Wright in a Taysom Hill-type role, where the defense is guessing as to what Vanderbilt is running with a new quarterback in. Florida also ran a similar option with Tim Tebow spelling Chris Leak back in 2006.

For Wright, the thing that will make this package most effective is his improvement as a passer. Through three games, Vanderbilt has attempted to get Wright in when the offense was in the red zone, but it has yet to result in a touchdown. If Wright can prove to defenses he’s a threat to pass it as well as run, this package will be most beneficial to Fitch’s offense.

All in all, for Vanderbilt to support its improved defense, it will have to get better at converting chances in the red zone, starting Saturday against Ole Miss. The Rebels come to Nashville with one of the worst defenses in the FBS (on average they have given up 44.6 points per game). Coming off a two-week bye, it’s now or never for Coach Mason and staff to make the necessary adjustments to get this offense, and team, to the finish line.