Allowing oneself small things to look forward to throughout the week make it so we don’t spend our lives constantly throwing glances at the clock like it’s our last 10 minutes at work, as we count down to Friday. 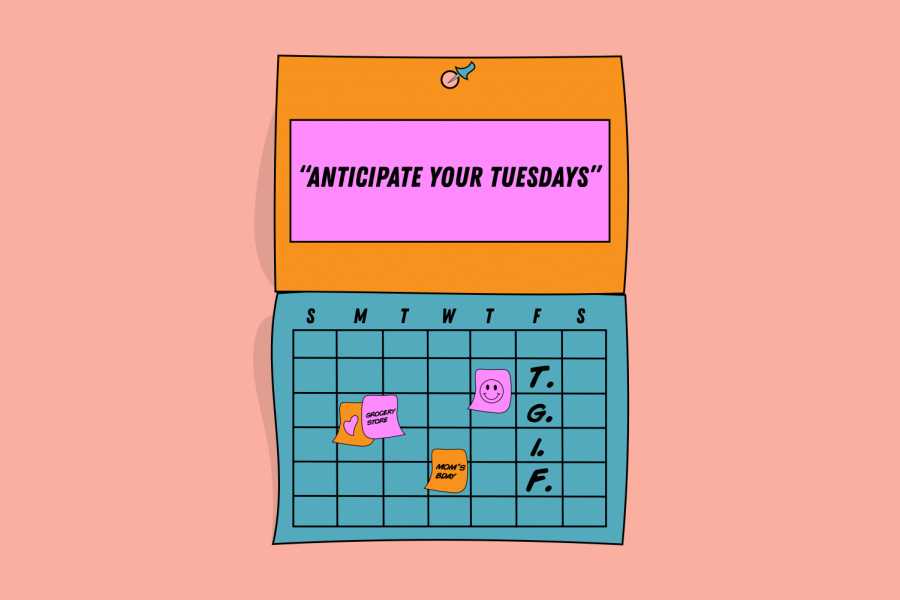 “TGIF” assimilates us as constant workers… except for two days of course. (Hustler Communications/Emery Little)

You know that really funny old Geico commercial where the camel makes his rounds throughout an office of cubicles, asking his depressed coworkers what day it is? He’s constantly ignored until one at the end begrudgingly mumbles “hump day” to the camel’s amusement. For months after this commercial aired in 2013, I remember hearing those very words every Wednesday as people did their best impression of the camel’s unmistakable voice saying “HUMP DAY!” (You probably read this in his voice too–didn’t you?) At first, the commercial was quite funny, and I hope its writers got a well-deserved pay-raise after it went viral. However, the more I think about the notion of “hump day,” the more it makes me wonder—why do we collectively view our weeks like marathons we can’t wait to finish?

The concept of “hump day” implies that Wednesday is the “top of the hill” after we’ve spent Monday and Tuesday heaving and slowly climbing there. Finally, at the top of the hill, we still can’t rest. Instead, we take a quick breather, rejoice in the fact that another treacherous week is halfway over and look forward to sliding down the slope that is Thursday, until Friday afternoon we can finally say what we’ve been waiting to say since Monday morning: TGIF, or Thank God it’s Friday. We’ve all said it in one way or another.

Geico’s commercial was so popular because, as Business Insider put it, it delivers a “day-related trigger.” The same phenomenon was elicited back in 2011 when “Friday” by 13-year-old Rebecca Black was stuck in everyone’s head… arguably for the worse. This contagion triggers a stimulus which then determines the thoughts and ideas that plague our minds. Both the commercial and the song are infectious, because no matter how much you hate them or love them, they tap into a seemingly universal want to fast-forward the entire week to Friday, and in turn, they capitalize on that. As many researchers have found, the reason Geico’s commercial was shared so many times was because collectively we’re celebrating the week ending.

Each year, we’ll “thank God it’s Friday” approximately fifty-two times… except maybe the week of Christmas… hopefully. A new cliché song about the weekend is bound to touch the charts yearly. In our lives, we’ll rejoice on hump day perhaps 4,700 times. And out of the 365 days in a year, 52 weekends will be followed by “Oh shit, it’s Monday again.” (I have a running theory that “I hate Mondays” merchandise is probably one of the highest-grossing product categories and am patiently waiting on someone to prove it.) When four out of seven days are spent counting down to Friday, life easily becomes a continuance of climbing up the hill for hump days. In a nutshell, we paint our lives to look like a sine wave, with a line continuously rising, reaching a peak and falling, and you are never at the top for long. (I apologize for reminding you of the horrors of high school precalc and trig, unless of course, you are a math major.)

While it may be unrealistic to try and live one’s entire life at that high point on the graph, cruising along at a slope of 0, why do we deliberately allow ourselves to engage in a collective mindset in which we spend the majority of our lives climbing up the slope patiently waiting to slide down and rest or do the things we actually enjoy, if only for 2 short days?

This isn’t one of those hackneyed and nauseatingly try-hard inspirational op-eds encouraging you to “live each day to the fullest,” or look forward to Mondays for the “joy of working” and the capitalistic pursuit of monetization. Nor is this one intent on giving you the ironic insight that “tomorrow isn’t promised,” especially during a PANDEMIC. (I think we can all agree those are the worst.)
Instead, this is one asking you to give yourself something else to look forward to throughout the week instead of solely dreaming of the inevitable Friday.
I get it–we go to one of the hardest universities in the country. As we try to balance college while in a pandemic, especially given the state our country is in, the idea of scheduling in meaningful free-time in the middle of our weeks seems like an insurmountable task. It may also sound impossible to do because Vanderbilt has yet to give us a day off and many of our professors are taking virtual learning and our temporarily pathetic social lives as an opportunity to work us to the bone. However, allowing oneself small things to look forward to throughout the week make it so we don’t spend our lives constantly throwing glances at the clock like it’s our last 10 minutes at work, as we count down to Friday.

A century of industrialization created the weekend as we know it. It’s argued that the weekend gives us a chance to step away from the capitalistic machine and reflect. Furthermore, looking forward to Fridays gets many through the week. As famed capitalist and ardent anti-unionist Henry Ford would put it, “A Marxist might point out that the weekend is an act of corporate trickery, a dangling carrot that keeps workers tethered to their jobs.” Yet, we must step back and ask, why is someone else holding our carrots–our weekend anticipations? Why don’t we let ourselves snack on them throughout the week?

Maybe your small anticipations include blocking off an hour and a half for your favorite movie Monday evening or penciling in time for your hobby or craft on Tuesday. Or perhaps it’s allowing yourself to spend an hour on Wednesday reading the first chapters of that book collecting dust next to your bed and finally “getting back to reading for fun” like you’ve been meaning to. Maybe even take the long-awaited nap you’ve saved for the week’s end today. Our lifetimes only have eleven years of Saturdays and Sundays–why should your anticipations be constricted to the social construct of a weekend? Snatch your carrots.