Late-game heroics from Hopkins lifts the Commodores to a 1-0 victory over No. 15 Georgia

Strong defense on both sides led to a 0-0 scoreline heading into the final moments of the match, when Leila Azari found Haley Hopkins for the only score of the game. 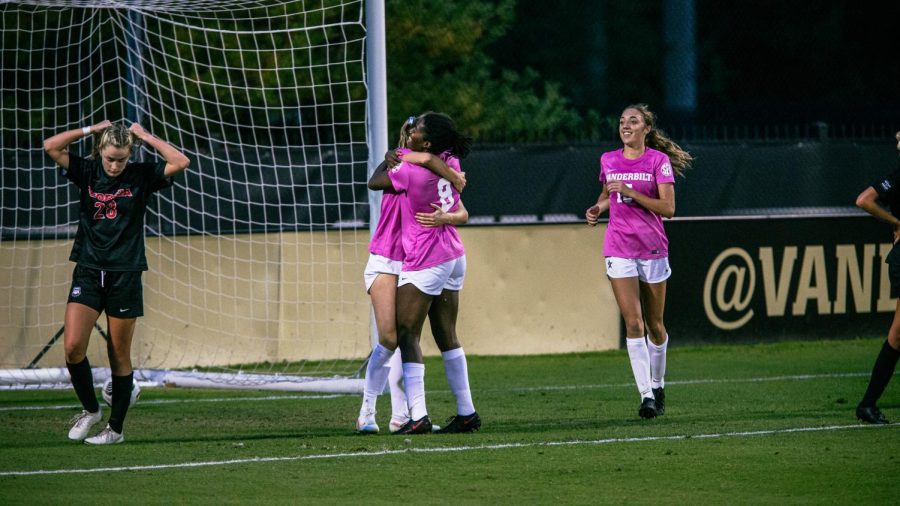 Another week, another barnburner for Vanderbilt soccer. This week, the Commodores took on 15th-ranked Georgia in what proved to be a defensive showdown.

Despite a lower-body injury that kept her from starting, Vanderbilt forward Haley Hopkins—who checked into the game in the 20th minute—lifted the team to a 1-0 victory in the 88th minute with a strong header from the top of the six-yard box. Hopkins’s late-match heroics were made possible by Leila Azari, who found Hopkins with a cross from the right side of the endline.

The match as a whole was physical, and it showed in the referee’s book. He gave out yellow cards like Halloween candy, with Azari and Hopkins receiving Vanderbilt’s bookings and Georgia defenders Katie Higgins and Hale Otto seeing plastic as well.

At the same time, both defenses played deep lines, meaning the midfield presented acres of open field to exploit. Vanderbilt did a notably better job taking advantage of this situation, controlling the wings and generating intriguing chances from out wide. Yet the Commodores struggled to find the back of the net, thanks in part to Georgia goalkeeper Emory Wegener, whose most impressive stop came from a back-post Azari shot attempt that seemed earmarked for goal. However, Wegener couldn’t hold the floodgates for the full 90 minutes, allowing Hopkins to add another game-deciding score to her résumé.

And this isn’t the first time this season Azari and Hopkins have connected for a game-winning header. It happened previously during Vanderbilt’s season opener, which finished as a 3-2 victory over Kentucky.

“Once you know that Leila is going endline, you have no other option but to get in the box and reward her hard efforts,” Hopkins said after the game. “She makes it easy for me.”

It wasn’t just Hopkins’s play that made the difference in the game. The whole backline, highlighted by an impressive performance from senior Myra Konte, stymied a strong Georgia attack to maintain an important clean sheet.

The Bulldogs average 16.4 shots per game, but today they had just 5—with only 3 on target. Even these chances were ambitious, often coming from the top of or outside of the 18-yard box into the waiting hands of goalkeeper Sarah Fuller.

Head Coach Darren Ambrose said that the team understood Georgia’s strong points and was able to limit their offense as a result.

“People forget that normally you’re now just a third of the way into the season. This is when we start to hit our stride,” Coach Ambrose said.

Perhaps the slow-growing momentum can be attributed to Vanderbilt’s frequently changing lineup. This was the first time all year that the Commodores have kept the same starting team from one game to the next. Despite this, the group has developed chemistry and consistency that will bolster their hopes of winning the SEC this season.

Coach Ambrose finished by doubling down on Hopkins’s impact on the game.

“Throughout my time with her, I’ve called her a winner,” Coach Ambrose said. “Every ball into the box is dangerous when Haley Hopkins is on the field and you saw that tonight. One ball in… boom.”

The Commodores seem to be picking up steam at just the right point of the season, who moved to a 3-3 record on Sunday. They have two more regular season games before moving into the SEC playoffs, looking for a title in the strangest of seasons. Next, they’ll travel to Baton Rouge to face the LSU Tigers on Friday.