The VandyBoys played their first live games of the fall this weekend, with intrasquad scrimmages on Friday, Saturday and Sunday. The Black team, drafted by Cooper Davis, won the best-of-three series. 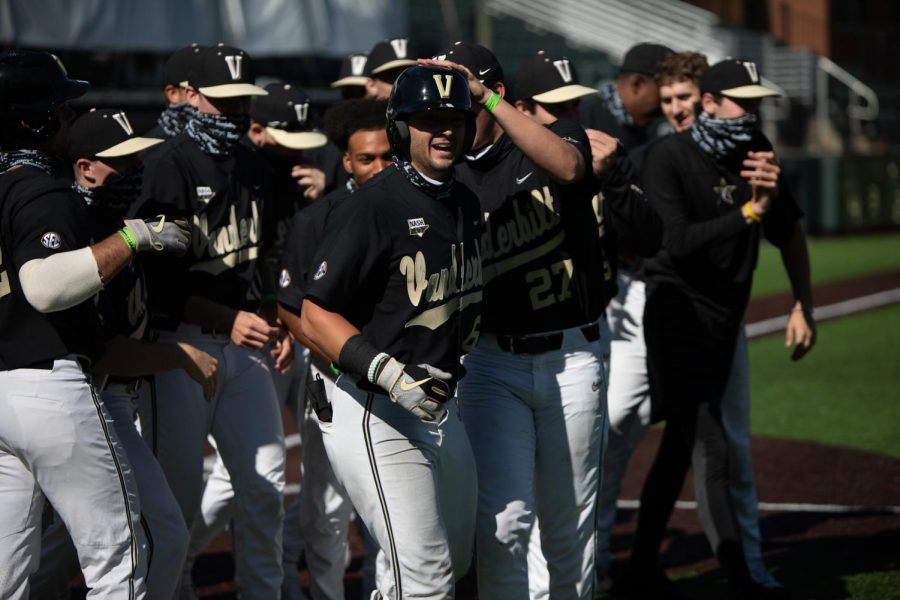 This weekend, Vanderbilt baseball played its first regulated games since the 2020 season was shut down in March. The annual three-game intrasquad series, tabbed the “Black and Gold World Series,” took place in front of a myriad of scouts, a limited number of family members and select members of the media on Friday, Saturday and Sunday. The Black team, drafted by Cooper Davis, ended up taking the series with victories on Friday and Sunday.

In lieu of game recaps, The Hustler provides its takeaways from each seven-inning game of the weekend.
Friday: Black wins 8-7
Game One was quite a slugfest, but the Black team prevailed 8-7. Sophomore catcher Maxwell Romero Jr. did not make an appearance in 2020’s abbreviated season, but if this game was any indication of his potential, he’s going to be hard to keep on the bench. He was 3-for-3 with a homerun and three RBIs for the Black team, and he was the most impressive bat on either team. Romero Jr. and fellow sophomore catcher CJ Rodriguez could make a productive tandem behind the plate, similar to the pair of Ty Duvall and Philip Clarke two years ago. Junior shortstop Tate Kolwyck also homered for the Black team, a moonshot over the bleachers in left-center field.

Junior center fielder Isaiah Thomas showed his power last season, leading the team with four home runs, and his speed was on full display Friday night for the Gold team. Thomas raced to a double in the second inning on a liner down the left field line; his speed gave him an infield single on a hard-hit grounder in the fourth inning. Speaking of the Gold team’s speed, freshman outfielder TJ McKenzie turned a likely double into a no-doubt triple and nearly beat the throw on a bunt in the fourth inning.

Junior pitcher Kumar Rocker was a big reason that dozens of MLB scouts traveled to Nashville, radar guns in hand, and he hit 96 mph on his fastball in a short outing. Rocker allowed just two hits and one earned run in three innings while fanning six batters. Freshman Patrick Reilly was impressive in 2.2 innings of work for the Black team and earned the win. He allowed three hits and one earned run. The radar guns popped back up when junior reliever Ethan Smith earned a three-out save for the Black team, fanning two of the three batters he faced.

The Gold team relied on two pitchers to put together six innings of work. Freshman Miles Garrett got the start and allowed five earned runs, one unearned run and six hits in four innings. He looked comfortable facing an intimidating lineup, and his start may indicate Corbin will give him plenty of opportunities in the spring, although with a stacked rotation, Garrett may only see time out of the bullpen.

– Betsy Goodfriend, Deputy Sports Editor
Saturday: Gold wins 5-2
After junior phenom Kumar Rocker started for the Black team on Friday, sophomore Jack Leiter—another Vanderbilt pitcher projected to go in the top five of the 2021 MLB Draft—took the mound for the Gold team on Saturday. Leiter may have only pitched two innings to Rocker’s three, likely due to his pitch count (it took him 35 pitches to get through two innings), but he seemed to have picked up where he left off last season. Leiter allowed just one hit in two scoreless frames, fanned four batters and flashed a fastball that clocked in as high as 96 miles per hour, according to one scout’s radar gun. Moreover, one of Leiter’s best weapons from last season, a devastating 12-6 curveball, fooled batters and dropped as low as 77 miles per hour.

On the other side, Chris McElvain started for the Black team and struggled through four innings. McElvain was credited with all five earned runs, as he allowed six hits, walked three and struck out one before passing the torch to Ryan Stefiuk, who finished the game off without allowing another run. McElvain’s first earned runs came in the bottom of the second, with runners on second and third; freshman Jack O’Dowd plated the first two runs of the game for Gold off a weak, slow-rolling grounder to the second baseman—one that appeared to be a routine ground ball. The Gold team’s big inning continued, as Enrique Bradfield brought two more runs home on a fielder’s choice.

All four of those runs came off rather unimpressive sequences: a routine ground ball and a fielder’s choice. However, the Gold team’s fifth and final run was an important sign of what’s to come for the VandyBoys in 2021. Last season, the Commodores struggled to replicate its high-powered offense of 2019, and one player who figured to be a factor was third baseman Jayson Gonzalez. But Gonzalez decided to take a semester off in 2019, so Vanderbilt was unable to reap the benefits of his power. Now back at school, Gonzalez showed his team how he can contribute in 2021 with an RBI double in the third inning.

Both of the Black team’s runs came in the top of the third inning, when Tate Kolwyck launched a round-tripper over the left-field fence. Kolwyck’s two home runs in as many games helped him put together a monster weekend in front of dozens of MLB scouts. Another welcome surprise for the Commodores, who look to replace closer Tyler Brown after being selected by the Houston Astros, was Luke Murphy. After Leiter’s two scoreless innings and Donye Evans’ three innings, allowing two runs (one earned), Murphy came in to pitch the final two frames. The Cross Plains, Tennessee native looked fantastic—maybe even better than Leiter (at least, on this day)—as he struck out four, allowed no hits, no walks and no earned runs; he even reached 97 miles per hour on his fastball, according to one scout’s radar gun.

Sunday: Black wins 9-8
In an epic, back-and-forth battle on Sunday, the Black team was able to outduel Isaiah Thomas and his eight RBIs thanks to a walk-off single in the eighth inning by Cooper Davis.

The offensive prowess was on full display all game as both teams demonstrated their versatility and ability to both hit for power and play small-ball. Whether it be home runs, deep doubles, drawn walks or bunt singles, both squads showcased it all.

Thomas got the Gold team off to a hot start in the top of the first with a three-run homer to right, his first of the day. The Black team immediately responded with RBIs by designated hitter CJ Rodriguez and right fielder Troy LaNeve to cut it to 3-2. Thomas answered back again with an RBI single up the middle, but the Black team scored the next five runs to give themselves a 7-4 lead.

In the top of the fourth, Thomas came up to bat with the bases loaded and, on a 1-2 count, crushed the ball well over the tall left-field wall, putting the Gold team up 8-7.

The scoring died down for a bit as freshman Gage Bradley and junior Ethan Smith each pitched incredibly well in relief for the Gold and Black team respectively.

First basemen Dominic Keegan ended the two-inning scoring drought with an opposite-field home run in the bottom of the sixth to tie the game at eight apiece.

In a fitting ending, Davis, the Black team’s senior captain, shot the first pitch he saw from freshman Nelson Berkwich to left field, scoring Matt Hogan and giving the Black team a 9-8 victory and 2-1 series win.

Thomas did the heavy offensive lifting for the Gold team and they got a big boost from Bradley on the mound who pitched 3.2 innings and only gave up one run. The Black team was paced by Davis and Keegan who each recorded 3 RBIs. Smith was the winning pitcher, recording an impressive four innings with no runs and only two hits surrendered.