Vanderbilt head baseball coach Tim Corbin and student-athletes spoke to the media for the first time since the 2020 baseball season was shut down in March. 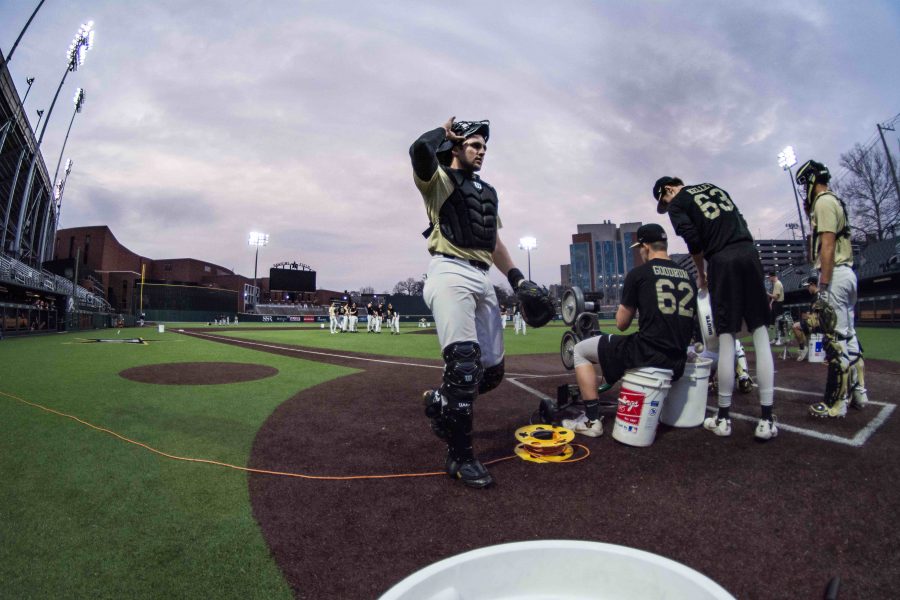 Vanderbilt kicked off its 2019 Black and Gold scrimmage with a close 3-2 victory for Gold on Thursday night. (Hustler Multimedia/Brent Szklaruk)

Corbin revealed updates about the team’s first organized series since 2019, which will look like nothing like its last against Toledo. There will be no fans; just scouts, media and family. There will be no opposing school, either; just Commodores facing Commodores.

“We had the draft last night,” junior outfielder Cooper Davis said in Wednesday’s press conference. “Jayson Gonzalez and myself are the two team captains, but the rosters will be released soon. I’ve been sworn into secrecy about who is on each team.”

Davis may not have disclosed who he selected for his side in the Black and Gold intrasquad series—which will feature three games, one on Friday at 6 p.m. CDT, one on Saturday at 1 p.m. CDT and one on Sunday at 1 p.m. CDT—but with a smirk, he did reveal one hint.

“I can’t name names,” he reiterated. “I’m just going to say, watch out for the Black team.”

The VandyBoys are excited—perhaps even anxious—to take the field in an organized game this upcoming weekend. The experience from playing regulated games will go a long way, even if it’s just against one another, according to Coach Corbin.

“We’ve got a lot of inexperience, as you know. I mean, there’s a lot of kids on that field that have never played an SEC game before,” Corbin said. “They may have played in the early season last year, but we’re very inexperienced. I’m not going to say we’re young, but we’re not old. We’re older on the mound, but yet there’s a lot of inexperience out there and I know, from what I see and what’s come back in the league, that everyone else is very old. So we’ve got a tall mountain to climb.”

And while the 2020 MLB Draft is still more than six months away, Vanderbilt—with Rocker and Leiter projected to go first and second overall—was peppered with questions about the MLB Draft.

“I’ll talk to them about [the MLB Draft]. I haven’t spoken to them about it yet, but when we have these individual conversations coming up in the next month prior to going home on November 20, we’ll talk about it,” Corbin said. “It’s not eye-opening to them that, every time they pitch, there’s 20 [radar] guns going up behind them. I just think they can handle their adrenaline pretty well.”

Corbin continued to note what makes many draft-eligible student-athletes different from the rest: their psyche; their ability to tune out noise, work hard and thrive under pressure. With Rocker, specifically, Corbin said teams would be investing in more than just the 6’4”, 255-pound frame. They’d be receiving more than just a fastball that can reach three figures or a slider that can deceive any batter.

Instead, in drafting Rocker, teams would be investing in a complete package. A physically imposing pitcher who’s “just wired right.”

Davis confirmed that notion. He said that it’s made him a better player being able to compete with Rocker in practice.

“He’s probably the best competitor I’ve ever played with in terms of never having that on-off switch. I mean, we’re in training every single day, and he is always on. He’s always competing no matter what,” Davis said. “If it’s a scrimmage, freezing cold and nobody’s in the stands, Kumar is competing like it’s the bottom of the ninth of the World Series.”

Rocker’s comments echoed that of his head coach and teammate—he’s competitive, he’s mature and he seems to be the consummate VandyBoy.

“It’s pretty simple,” Rocker said, when asked how he balances his high draft projection with the upcoming college season. “I mean, if you go out there and play for the guys around you, it becomes second nature. Things usually work in your favor.”

The moment he entered the Zoom press conference, Rocker was greeted by numerous Pittsburgh Pirates beat writers. The Pirates, of course, happen to have the first overall pick in the upcoming MLB Draft.

But that didn’t faze the star pitcher. He remained poised, even when asked about the trending hashtag in Pittsburgh, #TankForKumar.

“I really enjoy it,” he said with a smile. “Everyone enjoys social media, and it’s good to see that. I’m going to keep it in the back seat, though.”

Rocker, like the rest of the team, is focused on this upcoming weekend and this upcoming season, not the MLB Draft. It’s the start of a new era, or as Corbin would say, a new chapter. And the VandyBoys, still the reigning National Champions, will not take that privilege for granted.

“I’m just so lucky that I get to spend this last weekend of Black and Gold with my teammates,” Davis said. “I get to play and compete, which, during these times, is something that a lot of people are missing out on.”

“I just think that the distress of not having baseball, and now we’ve got baseball—it’s like a Christmas gift,” Corbin said.